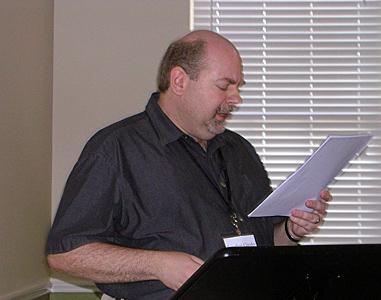 This past week I was honored to have a paper presented at the Baylor Symposium on Faith and Culture at Baylor University in Waco, Texas.

The theme this year was “Faith and Film” and I proposed a paper which examined how three Jewish films, “A Serious Man,” “The Believer,” and “Crimes and Misdemeanors,” struggled with the difficulties of faith in a way that was quite different from Christian films.

The conference began on Thursday and I presented my paper at a session on Friday morning, October 24.

My panel was joined by two other scholars, Kirsten Humer of Azusa Pacific University who gave a presentation on the changing style of the voice of God in movies, and Marcel DeCoste of the University of Regina, whose paper examined judgment and mercy in the recent film “Noah” by Darren Aronofsky.

The panel was chaired by Baylor professor Chris Hansen, director of “The Proper Care and Feeding of an American Messiah” as well as several more recent films.

For those who would like to read my paper, you may find it here.

But before you click, a quick spoiler alert warning. Unlike a movie review, which must refrain from giving away the ending, academic papers do discuss the films’ endings, as they help to explain and interpret the overall themes. If you have not seen any of these three films and do not want to know the endings, wait until you have seen them and then return to read the paper.

Also, another quick note: this on-line version is the complete, restored version. Due to my 20-minute time limit at the symposium, I was forced to make a few cuts; these cuts have now been restored. I hope you enjoy it.

My paper was well-received and the mostly Christian audience was quite appreciative of the Jewish view. There were a number of interesting questions afterwards, several of which united the themes of the three papers presented.

My wife Natasha attended the conference with me and we both very much enjoyed our experience at Baylor.

Some of the more interesting papers we heard included an analysis of violence and non-violence in “Ben-Hur;” a contrast of the films “The Exorcism of Emily Rose” and “Requiem” which were both inspired by the same case but went in very different directions; and a discussion of faith, hope, and charity in “The Lord of the Rings” trilogy.

There was also a panel discussion on “Crimes and Misdemeanors” which brought about some lively disagreement.

Each night the conference concluded with a film and discussion. The first night we saw the first installment of Kieslowski’s “Decalogue,” ten one-hour films inspired by each of the Ten Commandments. The second night we saw the Russian film “The Island” about a monk who has carried around a terrible sin but has developed special powers of healing and foresight.

The final evening we watched 1983’s “Tender Mercies” which was filmed in a small town only 60 miles from where we were in Waco. We were joined by the film’s director, Bruce Beresford (who later went on to make “Driving Miss Daisy”), who told some interesting stories about the film’s production.

Natasha and I very much enjoyed our trip to Baylor and meeting so many friendly people who were so welcoming to us. I especially want to express my gratitude to the symposium’s organizer, Darin Davis, the director of Baylor’s Institute for Faith and Learning; Jason Whitt, the associate director of the IFL; and my good friend Chris Hansen, the director of Baylor’s Film and Digital Media Division, without whom I never would have had the chance to attend.

In closing I just want to say that I am well aware that I have not updated Chizfilm in nearly a year. This is due to a number of issues in my personal life including several health problems, an interstate move from Florida to New Mexico, and taking some time off to work on a novel.

However, the Baylor Symposium on Faith and Culture has renewed my commitment to Chizfilm and I now resolve to keep it better updated in the future.