Two Questions for You 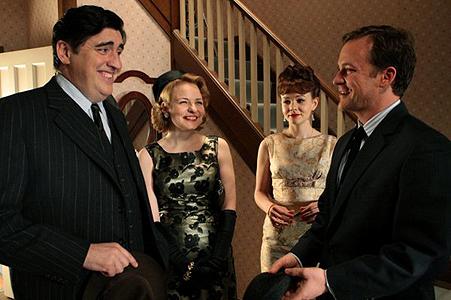 Warning: Spoiler Alert! Before I begin writing this article, I feel an obligation to warn you that if you have not yet seen, and intend to see, the British film “An Education,” which is wrapping up its American theatrical run and will be released on DVD in a few weeks, and you do not like knowing how a movie is going to end before you see it, stop reading right now. Come back and read this review after you have seen the movie. Because I am about to ask two important questions of you, about the film as a whole, and would really appreciate a response.

After several false starts, I finally got to see “An Education” yesterday. I thought this film about the romance between a high school aged girl and an older man in 1961 was very well-crafted, but I also found it quite disturbing.

I suspect, however, the filmmakers wanted the audience to be disturbed. Not because of the age disparity between Jenny (Carey Mulligan) and David (Peter Sarsgaard)—we have seen plenty of “May-December” romances on screen. And how many young girls have been swept up in the romance brought by an older man!

But the disturbing concern here is that David turns out to be such a contemptible character. I wondered if the fact that he was Jewish—the only Jewish character in the movie, for that matter—made this an anti-Semitic film.

Now there are plenty of Jewish films where there is a Jewish character of bad morals—“The Burial Society,” “A Price above Rubies,” “Liberty Heights,” “Late Marriage,” “When Do We Eat?” “Crimes and Misdemeanors”—to name just a few off the top of my head. But mostly, these films also have good Jewish characters to counterbalance the negative ones; no one considers them anti-Semitic.

And there has been much debate as to whether Shakespeare’s “The Merchant of Venice” is anti-Semitic, but at least in that, Shylock’s Judaism is key to his character—he makes it clear that he has suffered anti-Semitic abuse by Antonio and makes a great speech justifying his actions as appropriate: “If you wrong us, shall we not revenge” just as any gentile would do.

But here, in this case, David’s Judaism is practically incidental. There are only a few brief references to his religion: at the beginning and about two-thirds of the way through. Granted, I did love that brief exchange between Jenny and the headmistress (Emma Thompson).

When asked if they had yet picked out a church for the wedding, Jenny responds that they won’t be married in a church because David is Jewish. The headmisses then says, “You do know that the Jews killed our Lord.” To which Jenny relies, “You do know that our Lord was Jewish.”

Yes, it’s a great little moment for Jenny, but in all seriousness, if that scene were taken out, as well as the few brief references in the beginning to David being Jewish, the overall movie would not be diminished. David’s Judaism is not key to understanding the issues and themes of the film.

David exposes Jenny to the greater world, but he never tries to teach her anything about Judaism; he never practices any Jewish ritual or goes to synagogue. On the contrary, when David takes Jenny to the Ravel concert, it’s clearly Friday night, but no one says anything along the lines of, “If it’s Friday night, why aren’t you celebrating the Sabbath”? It’s just not an issue.

So if it’s not an issue, why bother to mention that David is Jewish at all? I couldn’t help wondering if there were some anti-Semitic motivation behind this. Why add this aspect to such a horrible character?

David’s quite the charmer. A real smooth talker. You know, he reminds me a bit of Colonel Hans Landa, the Nazi played by Oscar-winner Christoph Waltz in “Inglorious Basterds.” Not that David is on the same moral level as a Nazi. He’s certainly not a mass-murderer.

But he’s a liar, a thief, a two-timer, and has numerous shady business practices. He knows just how to smile when telling a lie and knows what buttons to push to get his way. He seduces Jenny’s parents (Alfred Molina and Cara Seymour) more easily than Jenny. And toward the end, when he must finally face who he is, he just doesn’t have the courage.

But seeing as how David is the only representation of the Jewish people in this film, I cannot help but wonder if this is how the filmmakers see, or wish to present, their view of Jews. Is this anti-Semitic? Or do my unjustifiable paranoid thoughts lead me astray from the real quality of this film, causing me to go off on an irrelevant tangent?

After all, there are many great things that can be said about “An Education.” It’s certainly well made. It has powerful acting by the entire cast and it has a number of great sequences, most particularly the romantic weekend in Paris.

There are plot situations that really make you question where lines should be drawn; the scene where David tells Jenny he “liberates” objects to get money to pay for the high-life is a great one, and it makes an excellent contrast with the scene where Jenny’s father goes off about money growing on trees.

The movie makes you think about what a formal education is good for. And, since I’ve already given my spoiler warning, I can say that final line, where Jenny explains how she implies to her new boyfriend that she’d never been to Paris, really makes you ponder the nature of subsequent relationships, how much you can learn from previous relationships, and how much you can forget them.

But this being a website dedicated to Jewish film, the two most important questions I feel I must ask about “An Education” are 1.) Should this be considered a Jewish film? and 2.) Is this film anti-Semitic?

As I’ve worked through this article and explored these two questions, I am starting to come to my own conclusions. But rather than tell you what I think, I’d rather hear what you think, my dear readers.

Write to me. Share your thoughts. I bet you have something enlightening to say, and I’m anxious to hear it.

And please be sure to let me know if I can quote you, because I may post some of the best responses in a future article.

Thanks. I look forward to hearing from you.