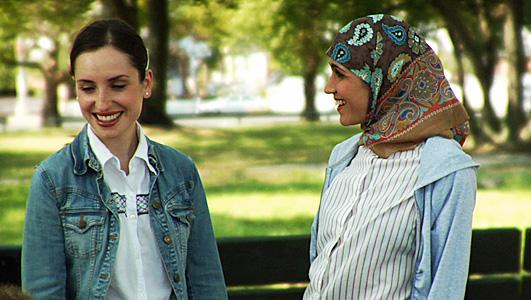 One of the big questions asked by the recent Israeli film “Fill the Void” is whether or not it’s a good idea to let your family dictate whom you should marry. As interested moviegoers debate this question, I thought it might help to look at another film which dealt with the same issue but from a slightly different perspective—that of an American filmmaker.

The 2007 independent light drama, “Arranged,” also deals with arranged marriages in traditional, religious communities, but in a world where it is hard to ignore outside, modern influences.

As I discussed in my interview with Randi Wartelsky last week, there’s some misunderstanding about contemporary arranged marriages. Unlike what is portrayed in the popular movie “Fiddler on the Roof,” where the father makes a deal and the daughter must abide by it, women in orthodox communities today are allowed veto power over suggestions made by parents and matchmakers.

The big difference between “Fill the Void” and “Arranged” is that the former is set strictly within the ultra-orthodox community in Israel—there is no suggestion that there is a wider world out there that might hold a different path; the latter is set in New York, that great Melting Pot, where the contemporary influences of the larger secular society challenge traditional values.

“Arranged” focuses on the friendship between two young women in their early 20s. Rochel (Zoe Lister Jones) who is Jewish Orthodox, and Nasira (Francis Benhamou) who is a strict Muslim, teach at the same public elementary school.

They realize that though they come from two different backgrounds, their personal dedication to their families and religious traditions shows they have far more in common with each other than with their secular colleagues. They bond particularly over the fact that both of them will soon be married to men in their tight-knit communities as arranged by their families. Neither object to the concept of arranged marriages in general, but both are quite dismayed by the particular prospects paraded before them.

The friendship that develops between the two characters is quite beautiful and both actresses give great performances. Clearly, the best scenes in the film are when the two are alone together.

The problem is when the outside world gets involved. I get the sense that the filmmakers are trying to imply that secular society is intolerant of religious lifestyle and unfairly condemns traditional attitudes which, the filmmakers imply, have kept the world safe, sane, and structured for centuries.

Early in the film, there is a scene which sets the tone for its depictions of the secular world. During a teacher training session, the principal (Marcia Jean Kurtz) encourages the new teachers to share something “juicy” about themselves in an attempt to form bonds. One of the teachers tells how she just returned from summer vacation in Europe and found the experience of topless sunbathing on European clothing-optional beaches to be liberating. Most of the women laugh and giggle but Rochel and Nasira are quite unimpressed.

A short time after that, the principal tells Rochel and Nasira how much she values them as teachers but fears they may soon leave their careers to become traditional wives and mothers. “There was a women’s movement, you know,” she says patronizingly. She then goes on to insult their modest dress and attempts to give them money to buy new clothes.

Later on, things get more heated after the principal sees Rochel wearing a string around her wrist which was given to her by an older woman as part of a strange, mystical ceremony intended to help bring her a husband. “My great-grandmother did the same thing back in Eastern Europe,” says the principal, going on about how silly were the old superstitions meant to ward off the “Evil Eye.” Rochel angrily shouts back that it’s no different than non-religious women reading their horoscope every day and better than trying to find love by getting drunk and sleeping with the first man they see.

While the argument between religious and secular points-of-view is an important discussion and worthy of much debate, the film presents it in extremely simplistic and unsophisticated terms. In this movie, neither side has anything substantive to say, but the secular side is presented as mean and insensitive.

This is taken to an extreme during a point where Rochel is getting fed up with the men she is being set up with by her shadkin (she goes from a very shy introvert to a comically absurd extrovert). When she tells her mother that she’s not interested in dating anymore, her mother tells her, “That’s not an option.” Rochel storms out.

She goes to see her skimpily-dressed cousin Leah (Alysia Reiner) who has left the orthodox community and is now living in the secular world, with multi-cultural friends. Although Leah is sympathetic to Rochel and encourages her to not feel obligated to her parents and her tradition, she then does what is possibly the worst thing one could do to Rochel in her delicate situation: she takes her to a wild party full of booze, drugs, and dancing to loud music. Rochel can’t help but run away from there.

The implication of this sequence is that there are basically two paths in life: that of the rigid traditions of your ancestors and that of wild sex, drugs, and rock and roll which inevitably leads to unfulfillment and possibly disease and violence. Not only is this dichotomy depicted much better in the film “Holy Rollers,” but obviously it’s a false choice. There aren’t only two paths in life; there are millions of paths. And you don’t have to commit to one before you turn 25.

I’m not sure which is worse—“Fill the Void” which doesn’t recognize the existence of the secular world, or “Arranged” which recognizes it but portrays it in an unfair, negative light. It’s the classic “straw-man” argument in which one presents a false view of an opponent’s position to make it easier to debate against.

It’s a shame because this film really had potential. It’s great to see a friendship between a Jew and a Muslim, but that’s where it ends. Rochel’s family is still prejudiced against Muslims, and no one suggests either woman could find a husband outside the narrow confines of their insular communities.

For a brief minute, it looked as though Rochel was interested in Nasira’s brother—now that would have really shaken things up—but the moment didn’t last and it’s never brought up again.

The ending of the film is too inevitable. It doesn’t challenge, it doesn’t liberate. But if you’re looking for a film which can reinforce traditional values, you probably won’t be as disappointed as I was.