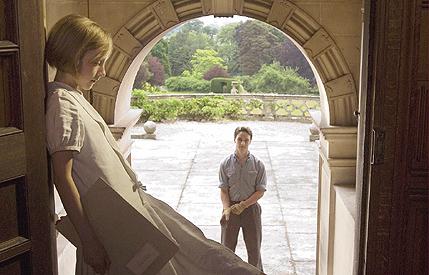 As every Jew knows, Yom Kippur is the Day of Atonement. Once a year, Jews spend an entire day in synagogue, fasting, praying, atoning for their sins. They look deep inside their souls, recognize their weaknesses, sincerely repent for their sins and misdoings, and vow to be better people.

The most important part of this process is seeking out those individuals whom they have harmed and asking for forgiveness. It’s a deeply religious and spiritual experience which hopefully improves the spiritual lives of those who have been wronged as well as those who have done the wrong.

A new movie called “Atonement,” based on the novel by Ian McEwan and which incidentally has been just been nominated for an Oscar for Best Picture, deals with a very serious wrong and a lifetime of atoning for that, including a scene where the wrongdoer ultimately seeks out those whom she has harmed.

And yet, it’s really not at all a religious film. Rather, the atonement, sought through self-imposed penance, has a pretty secular tone. Although atonement is a religious concept, not a single character in the film is religious and there is not a single reference to religion or God. Though that’s not necessarily a fault, I find it peculiar.

The movie tells the story of three people: Robbie Turner (James McAvoy), a self-made social-climber who was born the son of a servant yet has managed to attend a prestigious college; his lover Cecilia Tallis (Keira Knightly), a beautiful, rich woman; and her younger sister Briony Tallis (Saoirse Ronan, Romola Garai, and Vanessa Redgrave who play her at three different stages of life).

At age 13, while at a British country estate in the 1930s, Briony tells a lie, partly because of misunderstanding some things she sees, partly because of jealousy, and partly because of, well, that just plain meanness that sometimes children have yet to outgrow. This lie has the immediate effect of sending Robbie to prison but ultimately destroys the lives of all three main characters. Whether Briony can ever atone for this momentous sin of her youth is the big question that pervades the story.

There are a number of good things in this film. For one, powerful acting by James McAvoy (who might have picked up some tips by working very closely with Forrest Whitaker in “The Last King of Scotland” last year) and by Saorise Ronan who plays the young Briony (clearly an actor with a bright future ahead of her).

And when Romola Garai takes over the role of Briony five years later, the transition is seamless. Partly because the two share many physical characteristics, but more importantly Garai copies Ronan’s mannerisms. Or is it the other way around? Well, I think it’s fair to give credit for that to both actors.

There is also some really great cinematography. Beautiful, flowing, sharp images at the country estate scenes, and powerful images of the horrors of war in hospitals, an almost apocalyptic landscape of a battlefield in France, and sweeping though depressing chaos at a beach at Dunkirk as defeated troops wait, seemingly in vain, to be evacuated.

At Dunkirk, there is a very long and impressive tracking shot which is a marvel of movie-making, even if it is excellently enhanced by CGI. And yet, if you find yourself thinking, as you watch it, what an incredible effort it must have taken to set up this complex shot, as I did, you miss the emotional wallop it’s supposed to convey.

One critic referred to this shot as “the centerpiece” of the film. Well, it does come right about in the middle of the film. And it is the most amazing shot of the film. Yet if it is the center or key moment, I must ask, does this shot, in any way, contribute to the overall theme of the story? The horrors and confusion and mess of war is indeed a story worth telling, but does this relate to the moral issue of Briony’s lie?

I don’t think it does, unless one wants to argue a parallelism in that the war was started because of a lie. But I don’t sense that the film is at all trying to go there. Briony’s lie certainly didn’t create the mess that was Dunkirk. Yet, in all fairness, I can see it being argued that her lie did set Robbie on the path that eventually led him to his fate at Dunkirk, so I guess it isn’t that irrelevant.

One thing I did have a bit of a problem with was believing in the long-term dedication and commitment that Robbie and Cecilia had toward each other, separated for five years, after only a single passionate tryst in the library. Is this reason enough for Cecilia to estrange herself from her family? Did the passion really run that deeply? All I got was some youthful flirtation with a bit of sexual tension, but maybe I just didn’t pick up on a deeper chemistry.

When Robbie is in prison, of course, he has no other romantic prospects so I can understand why he clings to his love for Cecilia all that time. But Cecilia? As an incredibly gorgeous woman from a filthy rich family, no doubt she’d have tons of worthy suitors. Why does she remain so loyal to Robbie? She just didn’t strike me as that deep a character. But again maybe I missed something.

The end of the film, in which Briony, now played by Vanessa Redgrave, attempts to finally come to terms with all the tragedy her childhood lie caused as she approaches the end of her life, raises some very big moral questions. Can there be eventual justice or forgiveness for such a horrible act? At what age does one need to be responsible for such actions? Does art have the power to right a wrong?

My critic’s code, which forbids me from revealing the ending, frustrates me because there is so much brought up by the final scene that begs discussion. I really want to say something about it, but I cannot. And yet even with what is presented, there is still an uncomfortable question underneath the surface which the film doesn’t quite ask and certainly doesn’t attempt to answer, which leaves one with a feeling of incompleteness. This is a film which you must complete for yourself and discuss with those with whom you shared it.

Is that a fault in the film? No—if anything, I applaud a film that begs important discussion. Yet somehow I just have an uncomfortable feeling that the movie just didn’t push far enough, didn’t go quite deep enough into that morally questionable area where one is forced to confront one’s own misdeeds and to somehow atone for that which is unatoneable.

I wonder: if the film had been religious—from either the Jewish or Christian perspective—would it have been more satisfactory? And I wonder if the novel, which I haven’t read, does a better job confronting these major moral issues. Regardless, what the film does present is worth talking about.