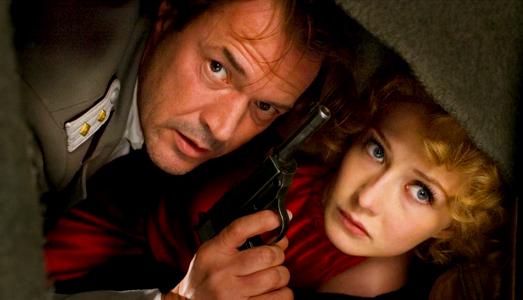 Many of us grew up having been taught in history classes that World War II was “The Good War.” One side (our side, of course) was perfectly virtuous and the other side was totally evil. High school history teachers—as well as A&E documentaries—like to present the war in rather simple moral terms akin to superheroes vs. supervillains.

And while World War II is a subject that has been visited and revisited far too many times to count by filmmakers, very few will question the basic assumption of “Allies good, Nazis bad.” Now, along comes Paul Verhoeven with some real (though somewhat embellished) history to dim the moral spotlight and let us see some serious shades of grey.

The father is Eliezer Shkolnik (Shlomo Bar-Aba), a Talmud scholar whose life’s work deciphering minute textual differences in manuscripts was rendered obsolete by the discovery of a new manuscript just before his work was to be published.

His only remaining claim to fame was being cited in a footnote by a highly renown Talmud scholar a half-century earlier. Again and again passed over for academic prizes, Eliezar passes

Verhoeven is best known to American audiences for directing Hollywood hits like “Basic Instinct,” “Robocop,” Starship Troopers,” and even “Showgirls.” But for his latest feature, “Black Book (Zwartboek),” which played in US theatres in 2007, he returns to his native Holland and works in his native Dutch language to explore a little-known story of World War II about a Dutch resistance cell and a traitor within their midst.

“Black Book” follows the story of Rachel Stein (Carice van Houten), a beautiful young Jewish woman who has been in hiding from the horrors of the Holocaust. When the story opens in 1944, the family of farmers who have been protecting her are all killed when a bomb drops on their house. Rachel is then forced on a series of adventures which includes a brief reunion with her family.

During an attempt to escape to liberated territory, they are ambushed and massacred by Nazis under the command of Günther Franken (Waldemar Kobus) with Rachel as the only survivor. Eventually she ends up working for a resistance cell headed by Gerben Kuipers (Derek de Lint) where she dyes her hair blonde and changes her name to Ellis de Vries to hide her Jewish identity.

Working closely with fellow resistance-fighter Hans Akkermans (Thom Hoffman) on an assignment, she proves herself quite valuable by thinking quickly and catching the eye of Ludwig Müntze (Sebastian Koch) the head of the Gestapo for Holland. Now the resistance cell wants Rachel (AKA Ellis) to seduce and sleep with Müntze to get information.

Follow all that? Well, that’s just the beginning because it gets far more complex than that. Rachel actually falls for Müntze and, amazingly, Müntze falls for her too. And we begin to wonder how bad can this Nazi be. Although responsible for all Gestapo activities in Holland, he’s shown to have a sincere, gentle side, and he even begins to negotiate a clandestine truce with the Dutch resistance in order to reduce killings on both sides. Shades of grey.

Assumptions of good and evil are further challenged when a raid to free hostages turns out to be a trap and it becomes clear that someone has betrayed the resistance. The movie turns into a suspenseful spy thriller when Franken tries to make it look to the resistance that Rachel/Ellis is the traitor.

And when the war finally ends, the horror does not because now the Dutch, with the permission of their liberator allies, sadistically seek vengeance against their former occupiers, targeting both Rachel and Müntze. It’s almost strange realizing that not all Nazis are bad and not all resistance fighters are good. And that sometimes the aftereffects of war can be just as horrific as the war itself.

Overall, “Black Book” is a good film. The plot keeps you guessing, almost until the very end, just who is the traitor. And it’s framed quite nicely by two brief scenes in Israel that help further illustrate the themes.

Verhoeven is able to get some really excellent performances from his actors, the cinematography is striking, and the editing puts the film together well, giving it a good pace for a thriller. The two-hours-and-twenty-five-minutes just fly by.

How much of the story is actual truth and how much has been embellished for the sake of drama is not clear, although I suspect more of the latter than the former.

But it’s important to keep in mind the multiple perspectives and the moral ambiguity a war brings. This particularly hit me in a scene in which a Nazi officer spoke of their noble fight against the “terrorists” to make a “free Europe.” My first reaction, of course, was, “Yea, right; who’s he kidding? The resistance fighters aren’t terrorists.”

It’s all a matter of perspective. And the closer you examine it, the more cloudy and ambiguous the morality becomes.

I think maybe that’s what Verhoeven is trying to get at. Maybe the movie should have been called “Grey Book.”