Doubt the Evidence But Not the Humanity 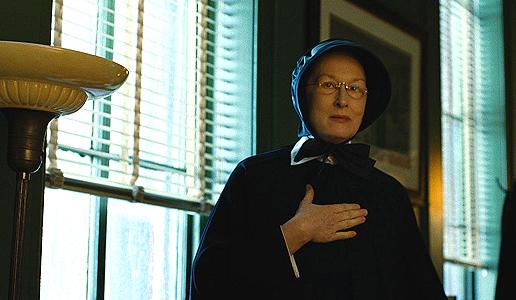 I seem to remember, a while back, reading an interview with a judge who said that the key to being a good judge was to act as if you’re 100% certain when you’re really only 51% certain.

And sometimes I’ve wondered if clergymen and others who profess total faith in their religion and God feel the same way. “Doubt,” a new film currently in theatres, addresses these issues; I think it would make a good companion piece to “Religulous” which was released earlier this year.

The movie is set at a Catholic school in 1964, shortly after the assassination of President John F. Kennedy. Racial integration and the reforms of Vatican II were slowly progressing. The dawn of the Sixties was a time when many began to doubt long-established beliefs in all walks of life.

Holding his congregation by the hand, the kindly Father Flynn (Philip Seymour Hoffman) gently leads his parish into the future by reforms such as the inclusion of a secular holiday song at the annual Christmas pageant, comforting the school’s first African-American student (Joseph Foster II), and writing with a ball-point pen. (Yes. Ball-point pens.

At first I thought it was a joke, but I have just learned that this is indeed historically accurate. At that time, for some reason, Catholic leaders were afraid of ball-point pens.) Flynn seems like a great priest who delivers well-thought-out, intelligent sermons and embraces a progressive direction for the Church, much to the dismay of the school’s stern and traditionalist principal, Sister Aloysius (the always incredible Meryl Streep), who has the bottom hand in their power struggle.

When the sweet and pure Sister James (Amy Adams) has reason to suspect that Father Flynn may have had “inappropriate relations” (words like “sex,” “pedophile” and “child molestation” are never used in this movie) with the African-American student, she brings it to Sister Aloysius’ attention.

Now the big question is whether or not Father Flynn sexually molested any students. Evidence is circumstantial; Flynn can explain it away, though perhaps not with firm conviction; yet Aloysius is certain of his guilt. Sister James is eager to believe in his innocence; it can be argued that her wanting to believe leads to her belief. (If anyone can see parallels to belief in God, raise your hand.)

By the same token, though, Sister Aloysius wants to believe Flynn guilty because that will help her to regain control of the parish and steer it back to a more traditional direction.

The issue of how progressive the school should be is a different issue than whether or not Flynn is guilty of child molestation, and yet the two have become intimately connected. If Flynn goes, Aloysius will regain control. And perhaps more importantly, children will be protected from a menace. Assuming he’s guilty. But if he’s not, than Aloysius will have destroyed an innocent man. With such high stakes, she had better not have any doubt as to Flynn’s guilt.

And what if Father Flynn is guilty? What does that make all the progressive reforms he tries to institute and all the good he does? Can his entire existence be condemned for a single, horrible act?

This issue, which the movie addresses, reminds me of something that my friend Ben said to me about two months ago when I was faced with the prospect of judging a different friend over something bad he might have done. “A person’s essence cannot be boiled down to a single act, Jonathan,” he said.

“If that is true,” I said to Ben, “if character really does matter so much, why do we throw a good man in prison for one little crime, ignoring all the good he’s done?”

“Well,” Ben said, “the Law may judge him by a single deed, but that’s not the human thing to do.”

Ben’s right. The judicial system is rarely concerned with a person’s character—just with whether or not he did the thing he’s accused of. And by ignoring the larger picture, by refusing the all complex shades of grey, we lose touch with our humanity.

When we look at the world in black-and-white, we tend to think things like, “If this person did this one evil thing, than he is an evil person and everything he has ever done must be evil.” And when we cast the whole world into roles of good and evil, then the moral line between accuser and accused becomes very thin and then we cannot be sure which of the two is the evil one.

So, to the religious leaders and to the judges of this world, take note: don’t be afraid of your doubt.

And don’t be afraid of your humanity. The world needs it. Desperately.