A Jewish Boy Driven by the Winds of War 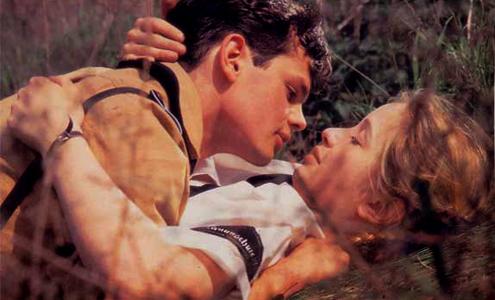 As it turns out, the opening line of “Europa Europa,” “You won’t believe this, but I can actually remember my circumcision,” may not be the hardest thing to believe about this 1990 German film which tells the amazing-but-true, ironic story of Solomon Perel, perhaps the only boy in history to be educated by both Stalin and Hitler. Certainly the only Jewish one.

Driven by the shifting winds—and shifting battle lines—of World War II, Solly (Marco Hofschneider) finds himself in many locations throughout Europe, much like Voltaire’s Candide, during perhaps the darkest period of European history. As a teenager, with little control over his own fate, save for telling a few lies to disguise his Jewish identity for the sake of survival, Solly witnesses and participates in several horrible events of the war, much to his own chagrin. His unlikely journey takes him on a rout so bizarre it would not be believed were it made up.

The movie begins in Germany in 1938. On the erev of Solly’s Bar Mitzvah, his family is attacked during Kristallnacht and his sister is killed. The remaining family members flee to Poland where they are safe for a little while until Hitler attacks Poland and they realize they again are in danger. The father tells Solly and his older brother Isaak (René Hofschneider) to run east, toward the Soviet Union. But in the chaos at the Poland-Soviet border, Solly and Isaak are separated; Solly ends up in a Soviet orphanage where he is educated by Bolsheviks.

For a time, Solly prospers at the Bolshevik school, learning to spout Marxist-Leninist doctrine. He asserts that “religion is the opiate of the masses” and he swears a loyalty oath to Stalin. He becomes one of the prize students of the school and is well treated by the teachers. But soon fate leads him down a different path when Hitler attacks the Soviet Union and he again is forced to flee.

Separated from his classmates when refugees are attacked, Solly is captured by Nazis. Learning that Nazis kill Jews, he hides his papers and identity. Quickly making up a new name for himself—Josef Peters—he claims to be a pure-blood German whose parents were killed by the Bolsheviks. The Nazis believe him; since he knows Russian, he proves invaluable to them as a translator, so they take him along on patrol.

Although from time-to-time, his Jewish identify is almost discovered—such as when he has to urinate, displaying his circumcised penis, or when a homosexual Nazi (André Wilms) comes on to him—the German unit takes good care of him.

Still, he’s terribly frightened of the Nazis and attempts to defect to the Russians. But when things don’t go exactly according to plan, an entire platoon of Russians is captured and Solly is given credit. He is now seen as a Nazi war hero and, as a reward, is to be adopted by the Nazi commander (Hanns Zischler) and sent to an elite school for Hitler Youth, deep inside Germany, where he has to swear a loyalty oath to Adolf Hitler.

How can he hide his Jewish identity when surrounded by “the best and brightest” of the Third Reich? This is especially terrifying for Solly when, one day, his professor demonstrates the “fool-proof” science of how to recognize a Jew by physical features. He is certain that his true identity will be revealed and he’ll be shot on the spot.

Solly actually makes friends, like his classmate Gerd (Ashley Wanninger), in the heart of the Third Reich. We are reminded that as evil as Germany was at this time, it was populated by honest people who had real feelings and sensitivities; they weren’t all monsters, as less sophisticated films like to portray.

Solly even falls in love with a German girl named Leni (Julie Delpy, in one of her early roles). Leni wants to make love to Solly; of course he cannot expose his penis to her because it would give him away. It’s a good thing he doesn’t because Leni has become totally indoctrinated by Nazi propaganda and swears she would kill a Jew if she met one.

Ironically, the one person to whom Solly can confess is Leni’s mother (Halina Labonarska) who is at a loss as to how to deal with her daughter’s fanaticism. Solly breaks down in her arms and cries, saying how much he longs to be with his own people.

Polish director Agnieszka Holland (“Copying Beethoven”) does a magnificent job building tension and making us sympathize with these characters who are swept up by history.

Early reviews of this film criticized Solly for being cynical and immoral, but I strongly disagree. The only thing that he does that could possibly be considered even slightly immoral is deny his Jewish identity; but he does that for the obvious reason of survival. He has no wish to rise to the top of the Nazi regime; it is others who keep pushing him along. He’s a teenager with very little control over his own destiny; on the contrary, when he witnesses others attempt to do something radical to save themselves, it invariably backfires. Solly can do little more than rely on fate; it often gets him out of the frying pan, but in so doing, throws him into the fire.

If anything, Solly has an incredible inner strength that I find inspiring. Surrounded by enemies, he mostly manages to keep his cool. And he is also able to recognize the absurdity in Nazi culture. This is particularly noted in a brief but meaningful scene just after he arrives at the Hitler Youth School and has been given his uniform. In the mirror, he practices giving the Nazi salute and clicking his heels; he reveals it’s ludicrousness by turning it into a silly dance.

Given the time, the place, his age, and his abilities, Solly does the best he can. While his story is certainly far from typical, to put it mildly, I think we can all recognize something universal in Solly, whose experiences bring powerful meaning to that song we all sing: “Henay matov u’manaim, shevet achim gam yachad.” “How sweet it is to sit surrounded by your brethren!”