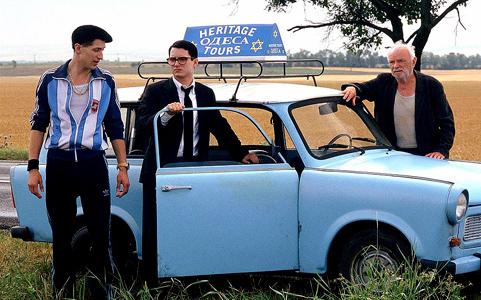 I experienced an interesting coincidence last Saturday, when, that afternoon I received an unexpected e-mail with genealogical information about my great-great grandfather, Meyer Chisdes, who came to America in the late 19th Century from a small town in Eastern Europe. (Due to the constantly shifting border over the last 150 years, that town was in Poland, Austria-Hungary, Russia, and is currently in Ukraine.

There’s an interesting family story about my great-great grandfather and how he got the name “Chisdes.” There’s been some debate as to whether or not the story is true, so some members of my family have been searching genealogical records of these Eastern European countries.)

The remarkable coincidence is that very evening, only a few hours after I got that e-mail, I was showing and leading a discussion of the movie “Everything Is Illuminated” at my synagogue as part of our Jewish Film Series.

This movie is about a young Jewish American who travels to Ukraine, attempting to find the small village from which his grandfather managed to escape, during the Holocaust. Having just learned that my great-great grandfather came from this very area put the film in a unique, personal perspective.

One of the first questions I asked, as I led the discussion afterwards, was “Why are Jews continually seeking their past?” I didn’t really get the kind of response I was hoping for (because, as someone later remarked to me, “Trying to lead a discussion of Jews is like herding cats”), but it was clear to me that the past illuminates the present and we are therefore much better able to understand ourselves. I think this is true not only for an individual, but for the Jewish people as a whole.

I think Jonathan Safran Foer, the author of the novel upon which this 2005 film was based, feels the same way. His story chronicles a rigid search across the Ukraine for a horror of the past which will shed much light upon the present.

The story is told from the point of view of Alex (Eugene Hutz), the grandson of a Ukrainian man (Boris Leskin) who had started a family business offering tours to Jews who are trying to find their past. The grandfather is now retired and the father is too preoccupied with other matters, so Alex must act as guide and translator; the grandfather, who now claims to be blind, must be the chauffeur.

Alex, at first, has no interest in digging up the past; he can’t see that it relates to him in any way. All he’s interested in is clubbing and “being carnal” with women. He means having sex, of course. His English, by his own admission, “is not so premium,” but the way he butchers the language is such a joy.

He says “petrified” when he means “afraid” and “make repose” when he means “go to sleep.” He’s also completely unaware of the subtle racist implication in the word “Negro.” This makes for great humor in the film.

His client, the young man trying to find the shtetl where his grandfather was born, is Jonathan Safran Foer (Elijah Wood, “The Lord of the Rings”). That this character has the exact same name as the author of the book is, of course, a complete and total coincidence.

Jonathan is “The Collector.” Since he was a little boy, he has gathered all kinds of whimsical objects that seem to have some sort of personal meaning to him or his family. Perhaps this obsessive-compulsive behavior is a mild form of mental illness; or perhaps Jonathan has some sensitive connection to the meaning of material objects that most of us lack. Like a good writer, he finds power in the details.

A series of events has finally compelled Jonathan to journey back to “The Old Country” from which his grandfather came, in search of answers to his family’s past.

Just as he is about to step off the train in Odessa, he meets Alex holding a sign that reads “Jonfen S. Fur.” “My name is Jonathan,” he says.

“Yes,” replies Alex with a smile, repeating “Jonfen,” unaware there is any difference.

Jonathan insists upon the correct pronunciation of his name and doesn’t want to step off the train until Alex gets it right, which he actually never does.

This scene is very funny in its own context, but I have to tell you, personally, as someone whose name is Jonathan Chisdes and has spent four decades dealing with people who often spell my first name wrong and have no idea what to do with my surname, I thought the scene was just too perfect. How many times have I been there! It was hard to stop laughing.

For the next 45 minutes, or so, the film continues to be very comical, as Jonathan is exposed to rural Ukrainian culture that clashes with his urban American sentiments. He is indeed a stranger in a strange land. The paramount scene occurs in a backwater restaurant where Jonathan attempts to order vegetarian food. Ukrainians, it seems, cannot comprehend why someone would not eat meat.

As the film continues, and they get closer to their destination, the mood slowly shifts to become more serious. The three main characters—Alex, Jonathan, and the grandfather—are each ultimately transformed by what they find.

A beautifully photographed field of sunflowers and a moonlit riverbank illuminate a Nazi atrocity that altered their personal histories and set them on deviating, and converging, paths. (Or is the convergence a coincidence? Late in the film, a character sheds some light on this question.)

I have not yet had a chance to read the novel upon which the film was based, but I did learn from several people at Saturday’s screening that the book was quite different. It was adapted for the screen by Liev Schreiber, who went on to direct the film. (You know Schreiber as a successful actor, seen most recently in “Defiance,” but this is his directorial debut.)

I think he did a marvelous job; “Everything Is Illuminated” is a very touching film. Each of the main characters is painted with a sensitive brush, the plot is developed well, the cinematography appropriately elucidates the Eastern European countryside, and the music underscores the tone well.

The film shows that there indeed is something special about the Ukrainian landscape and background. It calls out to you. (Or at least to me.) Perhaps I, myself, will someday make a journey there to find my own family’s roots and to shed some illumination on my own name.

Maybe getting that e-mail on Saturday was not a coincidence.