A Second Look From a Different Perspective 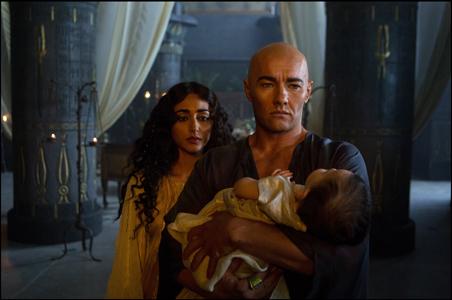 When I saw Ridley Scott’s “Exodus: Gods and Kings” last December when it was released in theaters, I wasn’t that impressed. However, now that it has come out on DVD and I’ve taken a second look, I have come to revise my opinion, at least somewhat.

Initially, Ridley Scott’s film, which tells the Biblical story of Moses freeing his people from slavery in Egypt and receiving the Law, suffers from “The Ten Commandments” association. It’s impossible to not compare it to that iconic Cecil B. DeMille film which set the standard for all Moses films which followed. And of course, when held up against that 1956 classic, “Exodus: Gods and Kings” cannot help but fall short. Now, it isn’t fair to judge Scott’s film by the same standards, but it’s impossible to not think of Charlton Heston as Moses and Yul Brenner as Ramses, even though it’s been nearly six decades, as they’ve become part of our cultural identity. At least our biblical film culture.

Also, since “Exodus: Gods and Kings” was marketed as a big-budget, special-effects driven, mainstream blockbuster, it was judged by both audience and critics on those standards. And it fell short. Mainstream audiences were expecting a straight-forward, traditional interpretation of the familiar Biblical story, enhanced by special effects and featuring familiar movie stars like Christian Bale and Sigourney Weaver. That’s kinda sorta what they got, but not quite. The film certainly didn’t leave one with the feel-good-about-God attitude with which “The Ten Commandments” concluded. Instead “Exodus: Gods and Kings” ended with ambiguities.

While it certainly wasn’t your grandfather’s “Ten Commandments,” most people felt it wasn’t their “Ten Commandments” either. Critics panned it and audiences avoided it for more traditional Christmastime fare like “Into the Woods,” “The Hobbit: The Battle of the Five Armies,” and “Night at the Museum: Secret of the Pharaoh’s Tomb.”

Certainly it’s fair to say there are problems with the film. Some scenes don’t quite work (such as when Ramses attempts to explain to Moses the economic problems of freeing the slaves or the way too casual and easily dismissed scene where Moses kills an Egyptian). Great actors like John Turturro, Ben Kingsley, and especially Sigourney Weaver are underutilized. The opening battle scene, which barely relates to the plot, is drawn out too long; and key questions, such as why Ramses changes his mind after freeing the slaves, aren’t answered. But the real problem is that the film failed to live up to the mainstream expectations that its marketers promised.

If, however, we look at the movie as an artistic, experimental film, it actually fares much better.

Let’s take the most controversial aspect of the film. The portrayal of God as an 11-year-old boy with a temper. Although some of the more religious members of the audience took offense, this was a really interesting look at Old Testament theology. So different from traditional films like “The Ten Commandments” where Moses humbly stands in awe to the calm, divine word that is revealed to his mind; here we have Moses arguing with a mad and powerful kid whom he’s not sure if he can take seriously. This is an extremely unique and interesting take on God which helps explain the angry, vengeful deity in the Bible, as opposed to the kinder, gentler, comforting God of contemporary religions. Not to mention how it creates a difficult and challenging partner that Moses must work to deal with. This yields some extremely interesting dramatic situations even if they are not in line with mainstream contemporary theology.

Again and again, Ridley Scott is making non-traditional and unexpected choices. By themselves, they are quite interesting, but in the context of an epic blockbuster, they really just don’t quite work.

Take for example a brief scene that occurs in the middle of the Ten Plagues. A crowd of starving Egyptians breaks into the temple granaries and starts helping themselves to grain. They are met with force by the Egyptian Army who, supposedly under the rules of Martial Law, start firing their arrows into this crowd of unarmed civilians, killing many. All the while, Ramses watches painfully from a balcony overlooking the scene. If you missed this, I don’t blame you. It went by very fast. Perhaps 20 to 30 seconds. It’s really powerful and there is much meaning in those few moments, yet in the context of the film as a whole, it is overlooked.

Another interesting issue in the film is the ambiguity of supernatural powers. Moments before the first time Moses sees God, he’s hit in the head by a rock. Could these visions be a result of a head injury? No one else can see God; Joshua and Aaron see Moses talking to himself and suspect he might be crazy. Also, the Ten Plagues are explained away by an Egyptian priest as natural phenomena. And just before the parting of the Red Sea a meteor is shown streaking through the sky, suggesting that the receding and subsequent return of the waters could have been caused by a meteor-generated tsunami. The film doesn’t make clear what causes these highly unusual events—God or Nature—but instead leaves open both possibilities. This does not satisfy the need for clear-cut answers, but it does pique intellectual curiosity.

At the end, we learn that Ridley Scott has dedicated this film to his brother Tony (also a big Hollywood director) who, two years earlier, committed suicide. Suddenly the complex, brotherly relationship between Moses and Ramses takes on a whole new light. Unlike in “The Ten Commandments” where the two step-brothers were simple rivals, in this film there is much genuine affection between the two at the beginning. As the film progress and they find themselves on opposing sides, they both struggle to turn their love for each other into hatred. We wonder what the rivalry issues between Ridley and Tony were and how Ridley is trying to work through those as he directs this film. In this light, “Exodus: Gods and Kings” becomes a film about brothers torn apart. Because of this, what Ramses does in the middle of the Red Sea, as the waters are crashing in, can bring tears to your eyes.

And that brings me to my final comment about the acting of Joel Edgerton, who plays Ramses. He clearly rises above every other actor in the production. His character is so nuanced and complex, I can’t remember the last time I felt such sympathy for a supposed “bad guy” in a movie. His love for his son, his concern for his people, his resentment of his father, and most importantly, his conflicted love/hate for Moses, make you think that he really could have been a good guy if it weren’t for the accidents of history which placed him on the wrong side.

As I watched this movie, I felt pulled in multiple directions. There was so much wrong with this film but also so much right. As an epic blockbuster, it fails; but if you look closely, and judge it as an art film, you can see it has a lot of worthy things to say.