Fizzles On Its Way Down, But Has Bright Moments 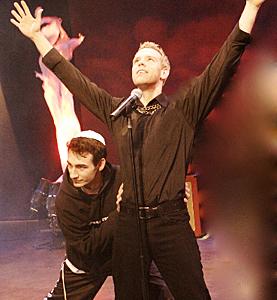 A down-on-his luck, non-Jewish, ex-boy-band singer is booked as the headlining act at a Glatt-Kosher resort-casino in the Catskills; as cultures hilariously clash, he learns as much from the Orthodox Jews as they learn from him.

Sounds like a really great premise for a Jewish feel-good comedy.

Unfortunately, this concept, which was turned into the 2008 independent film “Goy Band” and later released on DVD under the title “Falling Star,” just doesn’t quite fulfill that potential. It’s hard for me to say exactly where it went wrong, but somewhere between the writing of the script, the production, and the editing, the film fails more than it succeeds.

Not that it doesn’t have its share of moments that are well worth watching. For starters, there’s Adam Pascal, the lead actor who plays Bobby Star. Best known for the play and movie “Rent,” Pascal does a great job creating a very sympathetic character.

This is best noted in a scene in which he tells the story of his life: back in the mid-90s, he was the lead singer in a very popular boy-band which was selling out Madison Square Garden; five years later, only a dozen people showed up to see him in concert. He got so depressed that he got drunk and passed out.

Now, nearly a decade has gone by, no one remembers him, and he’s stuck in this resort which embodies an alien culture he doesn’t understand. But as he slowly adjusts to life within the Orthodox community, his character begins to open up.

Over the course of the movie, he matures from boy to man. I was pleased to see him, in a scene towards the end of the film, dancing with a Torah in much the same style as the Russian neighbors danced to “L’Chaim” in “Fiddler on the Roof.”

Also, I was moved by the character of Rebekka (Amy Davidson), who is the daughter of the resort owners (Tibor Feldman and Tovah Feldshuh). As an adolescent, like millions of her peers, she fell in love with Bobby Star; now, more than a decade later, she’s managed to convince her parents to book Bobby at the resort.

Rebekka is now engaged to the son of a rabbi, but meeting her old teenage idol prompts mixed feelings about her future. As Bobby begins to fall for her, he too is moved by her predicament.

So if the two lead actors and two main characters are good, how can the movie be all that bad? But I just had so many problems with the way the film, as a whole, attempts to satirize and skewer the insular community of highly-religious Orthodox Jews.

What was probably thought to be over-the-top humor comes across more as ugly than funny. While I certainly remembering chuckling a number of times, I probably cringed with embarrassment even more. Jews don’t really act like that, I remember thinking to myself; at least no Jews that I know.

For one, I was quite put off by the character of Chaim (Benjamin Bauman) who is engaged to Rebekka and is supposedly a great Kabbalah scholar. He is quite rude to his fiancée; he insults her clothes and commands her as if she were his servant.

When he is approached by a man who wants to learn Kabbalah, he publically calls him “unworthy” and physically pushes him away.

And Kabbalah, by the way, is treated quite superficially. There’s a line which dismisses Madonna’s popular understanding as cursory, yet the film portrays it no more deeply.

There are some brief references to truth encompassing everything and fractured vessels holding light; no real insight into the nature of the universe. Instead, for the sake of a joke, the “tree of life” is compared to a car air-freshener.

I was also rather disgusted by how much the casino owner had to pay Rabbi Sheinman (Joel Leffert) for his certification of gambling being “kosher.”

It seems to me that the question of whether or not Jews can gamble should be based on interpretations of Mosaic and Talmudic law, not on how much money the casino owner pays the rabbi.

The thing that most turned me off was the religious police. Do real Orthodox communities have these? Isn’t this what we criticized the Taliban for? They wander around on Shabbat sniffing at room doors to see if anyone has been smoking, they drag an old man from the casino floor when it’s time for “Mincha” prayers, and they see that someone is beaten to a pulp for kissing another man’s fiancée. This is funny? Maybe for some.

In some ways, it seems this isolationist community was portrayed a bit like a cult. Strict rules are enforced fanatically; outside influence is frowned upon; but the promise of “a good life” is the reward, supposedly worth all the sacrifices. I felt far more queasy than proud seeing Jews presented this way on screen.

What good do Jews in this movie accomplish? Bobby’s wonderful breakthrough—musical as well as emotional—is brought about not by the religious, but by outsiders such as Ty (Dean Edwards) the African American Shabbas-Goy and Manny (William Wise) the Entertainment Director who is more “ish” than “Jew,” or by the less-traditional members of the community such as two gay choreographers (Cris Judd and Erik Liberman) who successfully hide their sexual orientation from the group but feel free to flaunt it when alone with people like Bobby, Ty, and Manny who don’t care. This doesn’t say much for the Jewish image on screen.

Yet in the end, the film really does have some redeeming qualities. Bobby’s reworked act, in which contemporary music mixes with Jewish Klezmer, was quite enjoyable. And I liked the ending. Part of it was expected but not entirely. I was pleased with the direction it ultimately took.

I just wish that the film, as a whole, had been better. It started with a brilliant premise but somehow the execution was a bit flawed. From heights to depths it plummeted, like a falling star; fortunately it didn’t hit rock bottom.