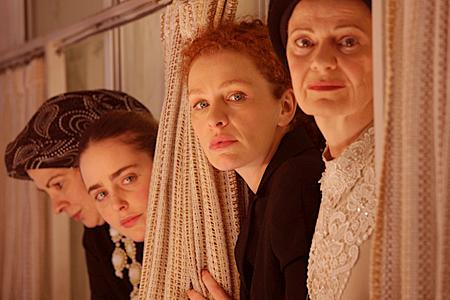 Although there have been plenty of feature films—both Israeli and non-Israeli—that have explored the unique, insular world of the ultra-orthodox Hassidic community (from “Kadosh,” “Time of Favor,” “The Secrets,” and “My Father My Lord,” to “A Price Above Rubies,” “The Chosen,” “Holy Rollers,” and “A Stranger Among Us”), very few have actually been made by members of the Haredi community themselves.

In fact, the only one I am aware of is “Ushpizin” and that actually had a secular director. The take on this community was always from the outside point of view; often critical, usually simplistic or stereotypical.

So I was quite excited to learn that a new Israeli film, “Fill the Void,” was written and directed by Rama Burshtein, who is herself a member of the Israeli Haredi community. Born in America and trained in Israel, she’s been helping to make films for ultra-orthodox women and now has made her first feature film.

A friend of mine who saw it before I did advised me against it, calling it “slow.” Well, that didn’t put me off because “slow” is often used as a code word meaning that a film focuses less on plot than it does on character. Since I enjoy getting to know characters, and feel with them, I took that as a positive, rather than negative, sign.

So generally speaking, I’m pleased to report, she was right. This is a film that lingers with the characters. You really get to know them as deeply serious people with their own unique motivations, joys, pains, and love for their community and its traditions.

For a debut film, Burshtein shows a real maturity. She knows not to hurry; she knows how to let the camera rest on an actor and sympathetically sit with her as she sighs out her tragic pain. She’s able to get her actors to express deep emotion with little or no words. Perhaps this comes from the Haredi culture, perhaps it’s Burshtein’s artistic style; whatever the source, it helps create a beautiful portrait of a unique community, seemingly anachronistic to the contemporary world.

The story revolves around Shira (Hadas Yaron), an 18-year-old girl on the verge of getting married. As is typical in the Hassidic communities, her parents (Chayim Sharir and Irit Sheleg) are in the process of arranging a marriage for her. Although she is allowed some veto power, Shira seems to like the guy her parents have picked out—at least his looks, because she hasn’t yet had a chance to talk to him. But before the engagement is finalized, tragedy strikes the family: her beloved older sister Esther (Renana Raz) dies in childbirth.

The baby has survived but Yochay (Yiftach Klein), Shira’s widowed brother-in-law, is incapable of raising the child alone and needs to be remarried. A possible match for him is in Belgium but the thought of him leaving Israel and taking the baby with him is too much for Shira’s mother to bear.

The mother hits upon the idea of marrying Shira to Yochay to solve this problem but, at first, neither Shira nor Yochay like the idea at all, especially in the aftermath of Esther’s death. And also because there is about a decade-and-a-half age difference between them.

The rest of the film concerns the slowly-evolving relationship between Shira and Yochay as they go back and forth over the reasons to get married or not to. They are both torn between what they feel is right for themselves, versus their duties to the family. Along the way, several of the other characters are less than honest as they try to manipulate the situation to their advantage.

Despite how radically different the Haredi world is from ours, the film feels genuine. Burshtein’s personal experience helps infuse the film with authentic details such as actual Hebrew prayers and rituals and the stark contrast between the roles of men and women. A common motif is scenes of men celebrating while women peek through doorways to watch.

Another realistic detail is how the rabbi must always be consulted on every little issue. In one of the more bizarre sequences, an important meeting with the rabbi is interrupted by an old woman who needs a new oven and seeks the rabbi’s advice on what features to look for and what is the best model to buy. It’s funny but, no doubt, is the kind of thing that must happen all the time.

Yet despite all these positive things, I could not help experiencing a slight sickening feeling in my stomach as I watched the film. Perhaps it’s because I’m a contemporary assimilated American Jew rather than a member of an ultra-orthodox enclave, but I couldn’t help thinking how trapped Shira was by the strict communal traditions.

At age 18, shouldn’t she be considering other options for her life besides being a wife and mother? Among other things, she’s a talented accordion musician; perhaps she might like to pursue a career in music. It never occurs to anyone that there might be better solutions outside the Haredi world.

Maybe I’m biased because I was married at the age of 44 and was given countless opportunities and options in my life, but I kept thinking to myself, “poor kid,” as she faced her rather limited choices.

The final scene suggests that the ultimate decision they made was perhaps not the best, but given the confines of the community, there were no really good options. Is that a criticism of the Haredi community? Or is this film a celebration of it?

I think I’ll have to let you come to your own conclusion on that.