The First Israeli in Space 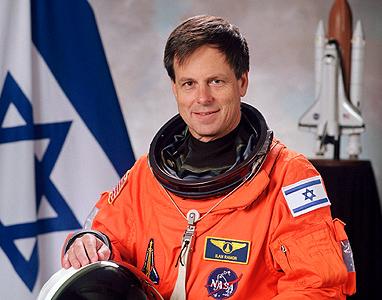 Having lived for nearly two decades in Central Florida, from where I could see the Space Shuttle launched, I was naturally quite interested in the space program.

Yet by the beginning of the new millennium, NASA was falling off my radar. Shuttle launches had become routine again and other matters seemed far more pressing: terrorist attacks, a war in Afghanistan, and debate about whether or not the US should invade Iraq.

But then I heard there was going to be an Israeli astronaut and suddenly my attention returned to the space program. Ramon was certainly not the first Jewish astronaut, but Ramon was the first astronaut from the Jewish state, and so that was a source of Jewish pride and another milestone.

I read quite a few articles about him and his preparations to go into space, and I had a friend who was excitedly covering Ramon and the launch of Columbia for the local Jewish newspaper.

When Columbia disintegrated upon reentry on February 1, 2003, I was shocked along with the rest of the world. I was deeply saddened and mourned Ramon and the other six astronauts.

Because of this, I was really looking forward to seeing the Israeli documentary “The First Israeli in Space” which promised to chronicle Ramon. An Israeli film crew had been hired to follow him around during his two years of training, and this movie is the result.

However, I must confess that I was terribly disappointed.

But don’t misinterpret my disappointment to mean that the film is terrible. On the contrary, it did have quite a few interesting moments in the training of Ramon and his backup, Itzhak Mayo, who trained along with him on the off chance that Ramon would not be able to make the voyage.

Some of the film’s highlights include their tour of the launch facilities, an explanation of the difficulties using a space toilet, a survival trip in the Rocky Mountains, a discussion of food in space, a bit of controversy in an interview with an Israeli scientist who argued Ramon should not go into space, Ramon and Mayo expressing deep disappointment that they will not be trained for Extra Vehicular Activity, and explanations of the various experiments Ramon would be conducting, including a study of atmospheric dust over the Eastern Mediterranean, and the growth of crystals in a micro-gravity environment.

Once Ramon is assigned to the crew of STS-107, there are interesting interviews with the other members: Rick Husband, Laurel Clark, Willy McCool, Mike Anderson, Kalpana Chawla, and David Brown; people who are more famous now, in death, then they were in life, when they were just one of several hundred astronauts.

It’s also interesting to follow some of the problems that Ramon and Mayo and their families have as they try to adjust to life in America and misunderstand some American culture during the two years of their training.

I was particularly amused that Ramon’s wife, Rona, had trouble finding a place to study alternative medicine, her chosen field, in Texas, which she discovered was way behind the rest of the developed world.

The film will certainly be intriguing to those interested in how astronauts train. And there are some moments of Jewish pride, such as when Ramon brags that he will be the first astronaut to eat kosher food in space, and when he shows the various souvenirs he will be taking with him (including a miniature Torah, a Judean coin from the year 69AD [actually inscribed “Year 4 of the Revolt against the Romans”], and a drawing from Yad Vashem by a 14-year-old boy in the Trezinstadt Concentration Camp, of the way he imagined the Earth would look from the moon). A terrible shame that all these items were destroyed.

Granted, this is all good stuff, but considering the tragic, fiery ending to Ramon, Columbia, and rest of her crew, the film feels terribly weak and empty. It lacks perspective because it doesn’t go into the explosion and the emotional impact it created. It’s kind of like ending a novel after only writing the first two chapters.

Near the beginning of the film, there is a brief reference to the Challenger explosion of 1986 and how that led to extra safety measures, a clip of Ramon’s wife saying how nervous she was about liftoff when the shuttle would be surrounded by so much fire, and another brief clip of Ramon saying that “the chances of anything going wrong are small” because there are backups of backups. In retrospect, these clips seem very potent and ironic, but they are really glossed over too quickly, as if the filmmakers didn’t notice just how significant they were.

The film leaves far too many unanswered but important questions. Not the least of which is why did Columbia break up? (A piece of foam insulation broke off during launch, hit the underside of the left wing, and damaged the heat-shielding Thermal Protection System. The movie doesn’t tell you that; you need to remember that from the news, from seven years ago.)

What happened to the data collected from all the experiments? Were they lost? How did Israel react, culturally, to the disaster? How did other astronauts react? How did Itzhak Mayo, the man who might have taken Ramon’s place, react?

I think I figured out what went wrong with this movie. Granted, this is just my guess, but what I think is that the filmmakers had an original plan and purpose—that is to follow Ramon around to document his training—but when the story changed, they weren’t flexible enough or creative enough to change their project with it.

When you make a feature film, you can deviate from the script a little bit; but when you make a documentary film, you need to be willing to follow the story wherever it takes you, regardless of your original plans.

There are plenty of excellent docs that do this. For example, “Lost in La Mancha” was supposed to be a simple behind-the-scenes look at the making of a big-studio movie, to be used as a DVD featurette; but when a series of disasters struck the set, shutting down production, the filmmakers chronicled that and ended up with something far more interesting about real problems in the movie industry.

In the documentary movie “Dear Zachary,” no doubt the filmmaker was terribly shocked and dismayed when one of the people he was following suddenly murdered another person he was following and then killed herself. His original concept for the film was blown to smithereens, but he had enough sense to realize that now he had something far more interesting on his hands.

The best example is the documentary “9/11” which began as simple project by two French brothers making a little movie about a rookie New York City fireman. But when they captured the first plane slamming into the World Trade Center and the group of firemen they were following ran right into the middle of the most important news story of the decade, the filmmakers didn’t have to think too hard to realize that their film should be about the World Trade Center.

Their final film is stunning, as well as an extremely valuable document of one of the most important days in history—that’s far more important than their original concept of rookie firemen.

Why didn’t the makers of “The First Israeli in Space” follow their example? I don’t know. All I can say is it’s terribly disappointing.

But at least their failure leaves open a great topic for some future filmmaker to come along and explore. Because I, and I’m sure plenty of others, would love to see a film that seriously explores the life and issues of Ilan Ramon.