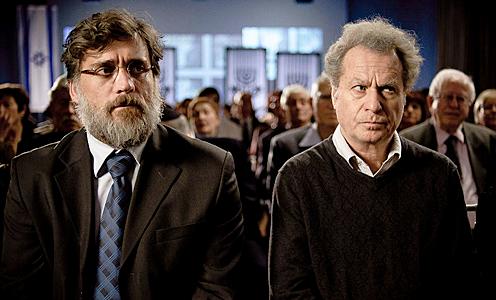 After watching “Footnote,” the 2011 Academy Award Nominated Israeli film by Joseph Cedar which is currently playing in US theaters, I realize I had a very good relationship with my father.

My Dad, who passed away a year ago, was my biggest fan; he supported me, encouraged me, took pride in my accomplishments. But apparently this is far from the universal experience. There are many fathers and sons who do not get along, as petty rivalries give way to formidable jealousies. One such father-son contention plays out in “Footnote.”

The father is Eliezer Shkolnik (Shlomo Bar-Aba), a Talmud scholar whose life’s work deciphering minute textual differences in manuscripts was rendered obsolete by the discovery of a new manuscript just before his work was to be published.

His only remaining claim to fame was being cited in a footnote by a highly renown Talmud scholar a half-century earlier. Again and again passed over for academic prizes, Eliezar passes his days deep inside a dark library pouring over ancient Talmudic texts, bitterly resentful of more successful colleagues.

But perhaps Eliezer is most irritated by his own son, Uriel (Lior Ashkenazi, “Walk on Water”). Uriel may have been inspired by his father to become a Talmud scholar, but he has far surpassed him in terms of popularity, prolific publications, and academic distinction. Recognized by most Israelis as a famous scholar who is frequently sought after for lectures, Uriel just can’t seem to win his father’s approval.

This is well demonstrated in the opening sequence where Uriel is accepting an award, telling a story about how his father inspired him.

Yet his father, uncomfortably sitting in the audience listening to the speech, clearly shows his disdain by fiddling with his wrist-band, being the last to stand, and the first to sit. Insult is added to injury later in the evening when a security guard refuses to let Eliezar into the party in his son’s honor because he has lost his wrist-band.

(By the way, people constantly passing through security checkpoints is quite the interesting motif in this movie. Sure, it’s a very common thing in Israel, given the justifiable fear of terrorism that pervades the culture.

Yet this film has nothing to do with terrorism. Not once is there any mention of a terrorist threat; unlike many Israeli films, words such as “Palestinian,” “Territories,” and “Suicide Bomber” are never uttered. So what’s the point of all the security? It’s to demonstrate who’s up and who’s down. Characters who are prestigious are waved through; those who are not known are subjected to degrading TSA-style searches. It’s quite revealing.)

The real conflict in this movie comes when Eliezar receives a phone call from the Ministry of Education informing him that he has won the coveted Israel Prize, one of the nation’s highest awards, for his life’s work. But it turns out that it was a mistake. The prize was supposed to go to Uriel and a secretary called the wrong phone number.

When the accident is discovered, only after some impromptu parties in Eliezar’s honor, as well as a report in the paper based on the false information, Uriel is informed by the prize committee that he actually won the award and they expect him to tell his father.

In one of the most dramatic and well-played scenes in the movie, Uriel confronts the committee arguing why they must allow his father to accept the award—if he learned the truth, it would break his heart.

But the committee’s chairman, Professor Grossman (Micah Lewensohn), argues that Uriel does not have the right to give the prize away. Petty personal politics plays out in a disgusting yet unfortunately realistic way.

When Uriel just cannot bring himself to tell his father the bad news, he returns to the committee and a new deal is struck: Eliezar will be allowed to keep the prize if Uriel agrees to write the judges’ citation and also to never apply for the prize himself, diminishing his own career.

The painfulness of this compromise is seen in the following intercut sequence. As Uriel struggles to write a citation making his father sound worthy of such an undeserved high honor, Eliezar gives an interview to a reporter tearing apart his son’s scholarship.

The tension continues to build as the film’s excitement increases. And yet, despite that, the movie disappoints. Mainly because this tension is never resolved. The movie ends before several mysteries are solved. There is a feeling of incompleteness.

In addition, there is a strange scene toward the end which makes no sense. It seems to be a surrealistic dream sequence, but no one wakes up. I was confused as to what that meant.

Also, I must admit to being bothered by the lack of emotion displayed by Shlomo Bar-Aba as Eliezar. With only a few exceptions, he is extremely dispassionate in most scenes. Even when told he has just won the Israeli equivalent of the Nobel Prize, he barely smiles. At one point, someone referred to him as autistic; I wonder if that was a clue to understanding his personality or if it was just intended as an insult. Regardless, I had trouble identifying with the character.

I suspect if my father were still alive and saw this movie with me, he wouldn’t have liked it any more than I. In fact, he probably would have liked it a lot less.

And then he would have gotten up and given me a hug and said, “By the way, in case I haven’t said so recently enough, I think the work you do is excellent. And this review of ‘Footnote’ you just wrote is spot-on. They should publish it in the New York Times.”

Thanks, Dad. I at least know we fared far better than Eliezar and Uriel.