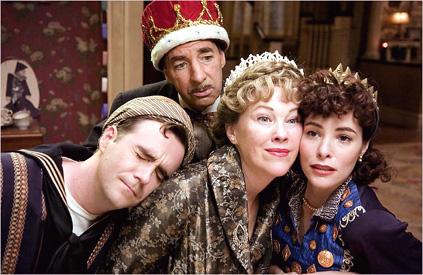 Since one of my all-time favorite comedies is Christopher Guest’s “Waiting for Guffman,” I was eagerly looking forward to his new movie, “For Your Consideration.”

I drove for nearly an hour, over a mountain, just to see it. And boy was I disappointed. With all due respect to Mr. Guest, his recent work is but a pale shadow of what it used to be. It seems to me that what was so raw and powerful and original ten years ago has now been so overdone, and mostly by the same people, that it just falls flat.

Actually, come to think of it, the ideas are not all that different from the 1984 film that inspired it all, “This Is Spinal Tap,” about a British rock band touring the US as its popularity wanes all too rapidly. If you sense a recurring theme of unrealistic expectations, then you can probably guess what “For Your Consideration” is about.

All you need to know is that it’s about a low-budget film production that gets hit with rumors about a possible Oscar nomination for one of its stars while it’s still being filmed, and you can fill in the rest. If you think you’ve seen it before, you might be partly right.

The movie-within-the-movie is an idiotic World War II period piece called “Home for Purim” about a family coming home to bid farewell to their terminally-ill matriarch and to celebrate, for one last time, the minor Jewish holiday of Purim. Serious dramatic conflicts come off as comical, as the mediocre actors attempt to portray Southern Jews of the 1940s.

(According to the press notes, this is actually set in the town of Valdosta, Georgia, where I actually lived for three years. However no one in the film actually said so. I wonder if the scene which specified the setting was cut.)

When it turns out that an anonymous person had visited the set and commented on an internet site that one actor was turning in an Oscar-worthy performance, the rumor starts spreading and getting out of hand. She and other cast members are invited onto television shows and more and more actors start getting what in Hollywood is called “the buzz.”

Naturally, jealousies erupt and the production starts heading into trouble. And when the producers begin to think the film could reach a larger audience, they suggest it be re-written to take the Jewish aspect out of the story and re-title it “Home for Thanksgiving.”

Of course, this is satire of the industry; Hollywood making fun of itself for being so vain and egotistical and obsessed with its own awards and rituals. And yet “For Your Consideration” really isn’t exaggerated that far from reality. There are some laugh-out-loud jokes in here, but they are few and far between. Mostly it just paints a sickening picture of the industry and those who are caught up in it and take it too seriously. That’s not funny; it’s just sad.

All of Guest’s usual cast are here: Harry Shearer, Parker Posey, Ed Begley Jr., Catherine O’Hara, Bob Balaban, Michael McKean, Fred Willard, Eugene Levy, Michael Hitchcock, and even Christopher Guest himself as, of course, the director of “Home for Purim.” Talented comedians all, and yet none topped themselves; in fact, most fell way short of their performances in previous Guest movies. With the exception of Catherine O’Hara, I dare to say they all phoned it in.

Although, to be fair, in many of the cases, it may not have been their own fault because their characters had such little screen-time that it was hard to develop such small roles. And that may be another problem with the film: there were just too many characters spread too thinly.

Overall, I’d have to say I was quite disappointed because the characters were mostly undeveloped, the plot was ordinary, the ending was predictable, and it just wasn’t that funny. There have been many comic films about movie making –“Sweet Liberty,” “The Independent,” “Living in Oblivion,” and “State and Main,” just to name a few—that have been much better and funnier than this.

When asked for your consideration, this is one that will definitely be passed up at Oscar time. Sorry Mr. Guest; better luck next time.