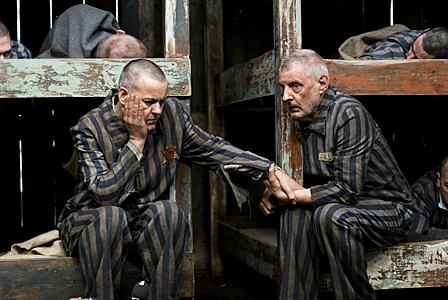 It was this snippet of dialogue with which I opened my review of “The Quarrel” five years ago. To me, these two lines from the movie, in which two Holocaust survivors walk through a park and debate how responsible God was for the Holocaust, summed up the two characters and their respective theologies. Chaim, who had become a near-atheist, was bitter and cynical after enduring the horrors of the Nazis. He blamed God and wished he could put Him on trial.

He didn’t, of course. That was beyond his power. Yet another film, produced by the BBC in 2008, picks up where Chaim left off. “God on Trial” portrays a group of prisoners in Auschwitz who actually do convene a rabbinical court and put God on trial.

While I stand by my assertion that “The Quarrel” is an amazing film that “goes to the heart of some of the most important issues facing the Jewish people in the post-Holocaust world,” “God on Trial,” which covers most of the same intellectual and theological ground, puts it to shame, going where “The Quarrel” doesn’t dare to go.

While one may leave both films with a very similar set of thoughts, the emotional impact is far greater in “God on Trial.” The setting is moved back a few years. Instead of three years after the Holocaust, when the immediate threat has been removed, this film is set in the midst of the horrors. Half of the characters have just been condemned to death and expect to die within a few hours. The other half know that their death may come in another week or two or three. Only if they are very lucky will they evade the Nazis until liberation comes. For these characters, it is not a walk in the park; understanding their relationship with God is something they desperately need to know in their last moments on earth.

The other major difference between the two films is the way post-Holocaust theology is debated. In “The Quarrel,” there are two points of view, the religious and the non-religious, and the two banter back and forth. In “God on Trial,” there are nearly a dozen characters with quite a range of opinions. Some resentful, some still loving, some who just cannot comprehend, and some who completely deny God. Some selfish, some charitable. Each with their own back story.

And the whole film takes the format of a trial. Three judges. Prosecution. Defenders. Witnesses. And what is the charge against God? Breaking his covenant with the Jewish people. It’s basically a breach-of-contract dispute. With the highest of consequences.

Many of the ideas which are raised in the film are ideas you’ve probably heard before. Why was God punishing the Jews? For assimilation? Why were religious Jews being punished along with the non-religious? Was God not acting for individuals but for the collective? Was Hitler the “hand-of-God?” Was it possible that God was not both all-powerful and all-just? Maybe he was only one and not the other? Was it because of free-will? Was a sacrifice being made in order for long-term betterment of the Jewish people? Or was there no God at all, only Hitler?

Like in “The Quarrel,” all these thoughts are brought up, examined, and shot down. No easy answers here.

However, the final argument in “God on Trial,” which brings up God’s treatment of people in the Bible, is pretty devastating. I wish I could say more about it without ruining the ending.

Needless to say, this is a very powerful film. The ensemble cast, which includes Stellan Skarsgård, Dominic Cooper, Eddie Marsan, and Stephen Dillane, among others, all give amazing performances. And the filmmakers interesting choice to frame the movie with contemporary tourists visiting Auschwitz helps put a profound depth into this film, as we, today, connect with the Holocaust victims.

We the audience, and the writer, and the actors, know something the characters don’t know—that Hitler will be defeated and, as a direct result of the Holocaust, the State of Israel will be reborn. A few of the characters seem to have a faith that something like that will happen soon. Most do not. And from their point of view, their little group, in that tiny bunkhouse, may very well be the last of the long line of Jews. After 4,000 years, it all ends with them. That’s a devastating piece of knowledge they are taking to their graves.

“The Quarrel” picks up a few years later. The Jewish race was not wiped out, it will go on, but how can Jews have a relationship with God after something like this? It’s still an important question, but discussing it while walking through a park doesn’t have the immediacy, the passion, the intensity, of the same debate inside Auschwitz. By comparison, it seems almost moot.

The one thing “The Quarrel” has on “God on Trial,” however, is depth of character. Because there are only two characters, we really get to know Chaim and Hersh as real people. “God on Trial” has so many characters that we don’t really know them very well.

So see both films, if you can. But if you can only see one, make it “God on Trial.” By far, it’s the more powerful of the two.