Addressing Some of the Great Post-Holocaust Questions 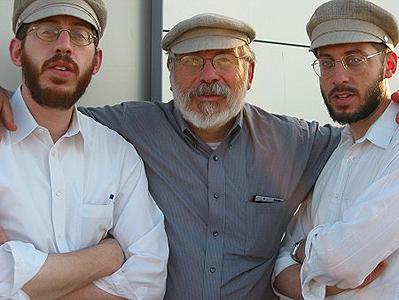 You’ve probably noticed some changes here at Chizfilm. Despite the high quality of the writing, there was just too much competition from general movie review sites, so the decision was made to narrow the focus.

So as of today, I will now be highlighting only films of Jewish import. By concentrating on movies that reflect the unique Jewish experience, it is my hope that Chizfilm, now re-dubbed Chizfilm Jewish Movie Reviews, will be able to enrich the lives of its readers by recommending films that are worth seeing and will help fulfill their Jewish needs as much as any piece of Talmud or Torah.

So to begin with, I’d like to start by recommending perhaps my most favorite documentary of all time, “Hiding and Seeking: Faith and Tolerance After the Holocaust,” which was released in 2004. This movie deals with some of the most basic issues that Jews struggle with in contemporary society: that is, the relationship between Jews and gentiles, hatred fueled by religions extremism, and how one can believe in the goodness and/or power of God in the wake of the Holocaust.

Filmmaker Menachem Daum, who co-directed the award-winning documentary “A Life Apart: Hasidism in America” with Oren Rudavsky, re-teams up with his partner to tell a very personal story. Yet it is one with universal themes that everyone, not just Jews, should be very interested in, as they ponder the question of whether people are essentially good or bad at heart, and how various groups which have a long tradition of hatred of each other can ever get along.

Menachem was raised by Holocaust-survivor parents in a traditional, Jewish environment. He went to Yeshiva and studied Talmud. He was taught to ignore the outside world because it had little to offer; yet when he attended Brooklyn College in the 1960s, he discovered that most gentiles were good, ethical people who cared deeply about making the world a better place. And he learned from his mentor, the great Cantor Shlomo Carlebach, the simple message that there is one God who created all of humanity and therefore we are all brothers and sisters who should love each other.

He is proud of his sons, Tzvi-Dovid and Akiva, who have become ultra-orthodox Jews who live in Jerusalem and spend their days studying Talmud. Yet Menachem worries about the growing religious extremism in the world which tries to teach the Jews to hate gentiles. Granted, their fear of the outside world is not unfounded, given centuries of anti-Semitism and, in particular, the Holocaust. Yet to Menachem, such hatred is not only unjustified, but it puts poison into the heart of the hater.

In an attempt to counter such hatred and to open his sons’ eyes to the goodness in the larger world, Menachem takes his sons on a trip to Poland, the home of their ancestors, in an attempt to find the Christian family who risked their lives to save their grandfather (their mother’s father) and his two brothers during the Holocaust.

The film chronicles the family’s journey to Poland. At first the sons, particularly Akiva, have strong reservations, but their experiences there are potentially life-changing.

For the last six decades, since the end of the war, there had been no contact between their family and the Polish farmers who had saved their lives. Could they still be there? If so, the Polish daughter and son-in-law would be in their late 80s or 90s. With 60-year-old information, the task of tracking them down is nearly impossible.

The Daum family does manage to see some important things. They meet an interesting woman historian who has been researching the Jewish community in her Polish town before the war. They find the cemetery where Menachem’s grandmother was buried. They stand on the spot where ten Jews were martyred by Nazis. And they find the ruin of the old synagogue where the grandfather had prayed.

But when they search for their grandfather’s Christian saviors, what they discovery is totally amazing and emotionally overwhelming. This is something that you have to see.

This documentary does not have the slick polish of other, bigger-budget docs, but the story and its powerful themes do not need fancy editing. It brings up so many important issues and questions:

These are questions that won’t go away. This movie attempts to answer some of them. Other Jewish movies attempt these and other important questions, as well. And that’s why I hope to be highlighting more of these movies in the near future.

“Hiding and Seeking: Faith and Tolerance After the Holocaust” is a great place to start. And keep your eye on this site to learn about more films that will reflect the Jewish experience and can therefore enrich your life.

Perhaps we all have as much to learn as Menachem’s sons.