A History of
Israeli Cinema 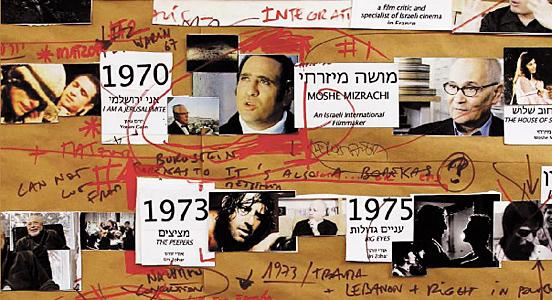 It could be argued that few foreign countries have a cinematic history as rich as Israel.
After all, no other country has received more Best Foreign Language Film Oscar nominations than Israel.

So a new documentary by Raphaël Nadjari, entitled “A History of Israeli Cinema,” which offers a comprehensive, in-depth probing of Israeli film, is quite the welcome treasure trove.

This two-part survey of eight decades of Israeli movie history, which was just released on DVD, weaves together clips from dozens of films and interviews with scores of filmmakers, actors, critics, and scholars. Beginning with what was considered the very first Zionist/Israeli film, 1933’s “Oded the Wanderer,” this documentary chronicles the development of Israeli cinema through the pro-Zionist films of the 50s, to the political films of the 90s, to the richly complex films of today, expressing Israeli thought and culture as the history of the country unfolds. It is quite remarkable to see how these films reflect the change in Israeli ideology throughout its existence.

I must confess I learned so much from Nadjari’s documentary—through clips, I was exposed to so many films I had never heard of. My appetite has been whet and I am anxious to go out and view many of these movies. But far more than that, I gained a real appreciation for how events in Israel’s history affected its culture and the way it was expressed on the screen.

For example, one of the events which changed the Israeli film industry was the 1960 American film “Exodus” (which I reviewed only three months ago), which was filmed in Israel. Prior to this point, I learned from the documentary, the Israeli government basically took a hands-off approach to the film industry.

But after they saw what a profound effect a large-scale movie like “Exodus” could have on business and on shaping world opinion, they became much more involved. The government encouraged and financially supported the industry. But also, perhaps unfortunately, attempted to prevent international distribution of films which cast Israel in a less than positive light. Films like 1964’s “Sallah Shabati,” a comedy which mocks Zionism and Kibbutzim.

And there are many other films—particularly those which criticize the military. Take, for example, 1986’s “Avanti Popolo,” which tells a story set during the 1967 Six-Day-War. A troop of Israeli soldiers captures an Egyptian soldier and treat him harshly—they won’t allow him a drink of water in the hot desert. In response, the Egyptian quotes Shylock to the Israelis: “Hath not a Jew eyes? … If you prick us, do we not bleed?” Apparently audiences went wild for this as it flipped traditional anti-Semitism on its head.

The closer we get to the modern era, the more brutal the films become. A powerful example of this is 1993’s “Life According to Agfa” directed by Assi Dayan. It is quite interesting since he is the son of Moshe Dayan whom, the critics point out, embodied the ideals of Zionism like few others.

But his own son made a film which turned utopian Zionism completely upside-down and dared to imply that everything the founders had dreamed has fallen apart. His film depicts a troop of IDF soldiers who go into a Tel Aviv nightclub filled with leftists who criticize the occupation and insult the military; in response, the IDF soldiers pull out their weapons and kill everyone in the place. Assi Dayan, the commentators note, shows Israel as a dystopian society.

“A History of Israeli Cinema” is also full of all kinds of fascinating little stories about the films and the people who made them. Take the example of filmmaker Uri Zohar who made seemingly secular films, such as “Hole in the Moon” and “Peeping Toms” in the 60s and early 70s.

By the late 70s, he had given up his career as a filmmaker and became ultra-orthodox. He studied Torah, Talmud, and eventually became a rabbi. After the fact, the critics went back to look at his films and were shocked to now notice religious undertones; they could sense the director struggling with questions of faith, but through secular metaphor and other subtle ways.

An interesting trend that the documentary points out is that there were a series of films made in the early and mid 80s which could be seen as quite optimistic about the quest for peace. For example, 1984’s “Beyond the Walls” depicts Jewish and Palestinian prisoners who begin talking with each other, argue with each other, and eventually respect each other, all inside a prison. There is so much hope in these films. Yet, when the directors are interviewed today, looking back, every one of them says they were naïve then and couldn’t make such films today. Like so many in contemporary Israeli society, they have given up hope.

Another fascinating moment occurs late in the documentary when filmmaker Amos Gitai, who made 1999’s “Kadosh,” is being interviewed and is describing how, in his opinion, the ultra-orthodox are a threat to the country; he criticizes their religion as being far too masculine and out-of-date.

This is intercut with an interview of Shuli Rand, who may be the only ultra-orthodox filmmaker in Israel, and made 2004’s “Ushpizin.” Rand is criticizing most of Israeli cinema for misunderstanding the ultra-orthodox and failing to deal with serious religious issues such as whether God exists and how He affects the affairs of humans.

When I first sat down to watch “A History of Israeli Cinema,” I had a feeling that I was about to see a complete and definitive account of the subject. After all, at three-and-a-half hours, it certainly seemed like it would cover everything. And yet, I can think of at least a dozen Israeli films I am aware of that were not even referred to.

Recent favorites like “The Bubble,” “Campfire,” and “Walk on Water” to name just a few. And what about the ones that I don’t even know about? Perhaps in the greater scheme of Israeli cinema as a whole, they are just not significant. Can I trust Raphaël Nadjari to properly highlight the important and eliminate the irrelevant? I guess I have to; as I am no expert on the subject, I have no choice.

So I cannot comment on what isn’t there. But at least in terms of what is there, it is excellent. It’s a fascinating study of some amazing films which couldn’t have been made in any other country—they are all uniquely Israeli.

The historical development of these movies, collectively, is a compelling story and I can’t help wondering what the next trend in Israeli cinema will be and how that will reflect the political and cultural reality of today.