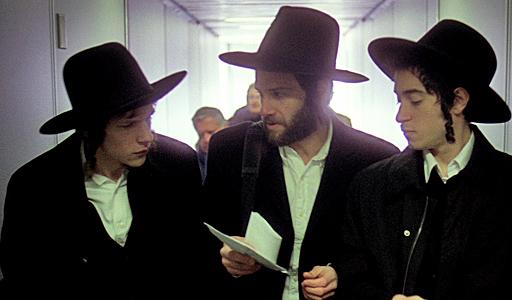 As much as we might like to deny it, Jews occasionally commit some pretty heinous acts. From Arnold Rothstein, Meyer Lansky and Bugsy Siegel; to Heidi Fleiss, Amy Fisher, and Eliot Spitzer; to Ivan Boesky, Jack Abramoff, and Bernie Madoff; to Jack Ruby, Yigal Amir, and David Berkowitz; we collectively cringe every time a member of the tribe becomes notorious and embarrasses the community.

We tell ourselves Jews are morally upstanding, yet Jews like these remind us we’re not as holy a community as we like to think. Still, despite those less-religious members, we put faith in the ultra-orthodox; surely the Hassidim, isolated from the modern world, are immune from the temptations of money and power.

But as it turns out, even Hassidim can be criminals, such as the shochets who were arrested for mistreating animals and illegal immigrant workers in Potsville, Iowa, or the rabbis who laundered money in New Jersey several years ago.

And there was another incident—perhaps you may not have been aware of it—but in the late 1990s, a group of Hassidim were arrested for drug smuggling. Pretty shocking. Actually, I was not aware of this—perhaps it was kept out of national news or perhaps I was preoccupied at the time—until a recent movie came out which was inspired by this event.

The movie, called “Holy Rollers,” was released last year, and stars Jesse Eisenberg as Sam Gold, a young Hassidic man who, despite his devotion to Hashem’s laws, is unsatisfied with his prospects in life. He’d like to be a rabbi, but he’s not a great yeshiva student; he’d like to have more material comforts for his family, but his allowance working for his poor tailor father (Mark Ivanir) is skimpy; he’d like to be married but potential wives are turned off by his mediocrity.

Enter Yosef (Justin Bartha), his next door neighbor and older brother of his best friend Leon (Jason Fuchs). Yosef offers Sam a deal that’s too good to pass up: for a very nice sum of money, take an all-expenses-paid trip to Amsterdam to bring back some “medicine.” Being somewhat naïve, Sam senses nothing nefarious in this; he jumps at the chance and brings Leon along. Only after they return to America do they realize they’ve been smuggling drugs.

At first, both are highly offended, incensed, and pray for forgiveness; but when Yosef tells Sam he did a great job and that his Israeli boss, Jackie (Danny A. Abeckaser), the head of the operation, is impressed with him, Sam parts ways with Leon and begins to embrace the seductive, dark world of drugs, sex, and lots of money.

Slowly heading down that slippery slope, Sam begins to embrace the wild parties, dangerously flirts with Jackie’s girlfriend Rachel (Ari Graynor), improves the drug distribution operation with business savvy, and eventually organizes his own little group of young Hassidim to help him smuggle drugs on several trips from Holland to the US.

He begins to feel that he’s on top of the world, that he’s controlling the game, and that he can even straddle both worlds—that of the illegal drug lords and that of the close-knit religious community he was born into. Though obvious to the audience, Sam doesn’t realize that this can’t continue indefinitely.

The plot may be a bit old—I think I’ve seen the story of an innocent man seduced by a drug culture in two or three other films—but the twist of the Hassidic element helps make this a bit more unique.

There are certainly some interesting Jewish motifs. For one, we hear the echoes of a rabbi’s sermon about the temptation in the Garden of Eden while Sam unsuccessfully fends off Rachel’s seductive charms. Another scene, in which Sam cuts off his payess, is highly symbolic.

Another interesting motif is the tefillin. Near the beginning we see tefillin used in the regular way as Sam prays. Later in the film, at the peak of his drug-smuggling career, he actually hides the pills inside his tefillin box. Oh, how sacrilegious!

Toward the end of the film, as he is beginning to break down, Sam is approached on the street by a Lubavitcher who asks him if he has prayed today; he helps Sam perform the mitzvah of laying tefillin. This clearly touches Sam deeply and you can see a reawaking of conscience.

But beyond the Jewish symbolism, what really strengthens this film is the relationships that are created. Sam relates very strongly to Yosef, Jackie, Rachel, his father, and Leon; and how they react to him touches Sam deeply.

To me, the most effective scenes in the film are those involving Sam’s relationships with these people: Sam and Yosef playfully racing across the Brooklyn Bridge, Jackie thanking Sam for reminding him that it’s Shabbat and he should call his mother, Rachel’s emotional look when Sam suggests they run away together, Sam’s father bitterly accusing his son of being a criminal, and a scene near the end where Leon just silently sits down next to a very frightened Sam as the weight of their strained friendship comes crashing in.

To me, this is what makes a movie; the characters and their relationships to each other. If they are believable, it doesn’t matter whether or not the plot is credible. After all, we might think, who could believe in Hassidic drug smugglers? Jews don’t do that.

But actually, though, they really did. No matter how much we’re tempted to deny it. Yes, sometimes Jews—even Orthodox Jews—go bad, just like everyone else. We’re forced to admit it with a painful wince. But perhaps, maybe through our religion, we can eventually find redemption.