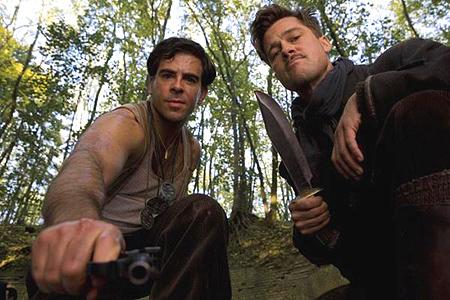 There’s something strangely compelling about a Quentin Tarantino film. A brief plot summary may make his movies sound like gratuitous gore fests, but when you sit down and actually watch them, you are drawn to the memorable characters and bizarre situations. Scenes are compellingly written and dramatically directed. Seemingly unrelated subplots are woven together masterfully. And when the violence finally does come, it serves the plot well and is over quickly. You don’t have to sit through long, clichéd action sequences waiting to find out which character will be killed or which faction will win this particular battle.

This is true of Tarantino’s latest film, “Inglorious Basterds,” which was just released on DVD last week. This story of a World War II era Jewish revenge fantasy is rather bizarre, yet Tarantino’s unique cinematic style draws the viewer in. Despite plots, setting, and themes that I might otherwise find quite offensive, as a pacifist Jew and devotee of historically accuracy, I couldn’t take my eyes off the screen.

Now, the first thing you need to know about “Inglorious Basterds” is that this is certainly not history. It may claim to be set during WWII, but it’s more about the mood and tensions of the era, rather than historical facts. It’s kind of like one of those role-playing games where players re-fight WWII to see how it might have ended differently if one thing or another had gone a different way. Suppose Germany developed the bomb first; suppose the Japanese didn’t attack Pearl Harbor and the US didn’t enter the war; suppose Hitler diverted resources from killing Jews to the battle front. You may have heard people discuss these hypotheticals, for fun. In a way, this is what Tarantino is doing, at least partly, so don’t be too surprised or offended when the movie wildly diverts from real history.

The first fictional element of Tarantino’s alternate WWII that we are introduced to is the “Inglorious Basterds,” an elite squad of American Jews who are hiding out in Nazi-occupied France, terrorizing Nazis. These guerilla-fighters, who are led by Lieutenant Aldo Raine (Brad Pitt, “The Curious Case of Benjamin Button”), ambush Nazi platoons, kill and scalp everyone, but leave one survivor to tell the tale. One member, known as the Bear Jew (Eli Roth), bashes in the heads of their prisoners with a baseball bat. Their merciless, brutal vengeance makes Guantanamo look like a summer day camp.

Meanwhile, a Jewish woman named Shosanna (Mélanie Laurent), who has escaped from the Nazis, has now assumed the false identity of a French woman who runs a cinema in Paris. She catches the eye of a Nazi private, Frederick Zoller (Daniel Brühl, “Good Bye Lenin!”), who is also a war hero. The Minister of Propaganda, Joseph Goebbels (Sylvester Groth), has made a movie about Zoller and now Zoller wants the Nazis to hold the premiere of the film at Shosanna’s theatre. With all the important Nazi brass in attendance, Shosanna begins to formulate a plan to take advantage of the situation.

Unbeknownst to her, the British spy agency also has a plan to take advantage of this. They send a special agent (Michael Fassbender), who also happens to be a film critic, to rendezvous with a double agent, the German movie star Bridget von Hammersmark (Diane Kruger).

And now we come to the villain of our drama, Colonel Hans Landa, of the SS, played with incredible relish by the outstanding Austrian actor Christoph Waltz, in a performance that I am sure will be nominated for an Academy Award. And the character of Landa, I suspect, will go down in cinema history as one of the most complex, intriguing, and smooth-talking villains of all time. Nicknamed “The Jew Hunter,” Landa oozes charm from every pore. He’s a quick and excellent judge of character and knows exactly what buttons to push and how to push them to get exactly what he wants. If his talents weren’t used in such a despicable service, he’d almost be quite admirable.

There are a number of excellent scenes in the film. Most memorable are the opening sequence in which Landa convinces a French farmer (Denis Menochet) to divulge where Jews are hiding, and a scene in a basement bar where undercover agents must interact with real Nazis. The dialogue is well written and the scenes take their time to develop to an appropriate climax.

I’m sorry to have to say that the conclusion of this revenge fantasy had a bit too much revenge and a bit too much fantasy for my taste. And yet I must admit that I found the theme about how cinema can effect political change to be a very intriguing one.

I was also interested to note that, at least in some way, every character in the film was an inglorious bastard. Even the most moral of the characters, in one way or another, did something quite distasteful. Were the Allies really all that different from the Nazis? And would they have been compelled to act in such a way if there were no war?

Perhaps war makes inglorious bastards of us all.