Does the Humor Mask the Issues? 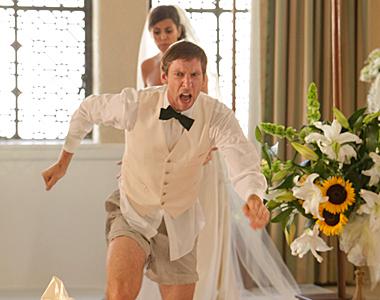 While reading over the press materials for the new film “Jewtopia,” I was struck by a comment made by writer/director Bryan Fogel, who said, “My film doesn’t conquer life or death questions … [All] I hope [is that] audiences laugh themselves silly over watching ‘Jewtopia.’” I wondered if he was just being modest, setting the bar very low, or if I knew something he didn’t.

Although the film is certainly very silly and filled with all kinds of low-brow humor that relies on stereotypes and gross-out jokes, there really is something serious going on beneath the surface. Sometimes light-hearted comedy can mask important issues; in this film, as playful as it is, there are actually questions about whether certain aspects of Jewish culture are good or bad, why someone who is not Jewish would want to join a suppressed minority, and, perhaps most importantly, the negative side effects of Jewish parents pressuring their children to marry within the faith. Perhaps I take the film more seriously than the filmmakers intend; nonetheless these issues arise even if their treatment isn’t that deep.

Early in the film, we learn something very important about the background of the gentile character Chris (Ivan Sergei). When he was younger, he fell in love with a Jewish girl; they dated for three years. When he asked her to marry him, she turned him down because he wasn’t Jewish. This sets the stage for the big lie that he is about to tell and drives the plot: when he meets another Jewish girl (Jennifer Love Hewitt), he tells her he’s Jewish. He doesn’t want to risk being turned down simply because he isn’t a member-of-the-tribe.

While lying is never a good idea, it’s hard to find fault with Chris. Not only because it’s flattering when someone on the outside tells us they want to be like us, but more importantly because he’s right. There is indeed a very good chance he again might be rejected because he’s not Jewish.

I know this because when I was a teen, I and most of my peers were told by our parents that it was expected we’d marry fellow Jews. Some of my friends weren’t even allowed to date someone who wasn’t Jewish. In a pluralistic society like America, this caused some harm. Not only because it sent a contradictory message about all people being equal, but in some cases it really warped our sense of love, dating, and marriage. Not to mention how unfair it is to not even give a chance to a potential gentile partner who might be “the one” and might even be willing to convert.

Thanks to this pressure, I, myself, started dating very late in life. Perhaps worse was my good friend who at first honored his parents request and dated only Jewish women. But eventually he came to resent it and rebelled; he married a Catholic woman and converted to Catholicism, partly as a reaction against his parents’ insistence on Jewish-only partners.

While I can appreciate the older generation’s arguments about the dangers of intermarriage and the responsibility of the individual to the group, putting religious constraints on dating can sometimes cause more harm than good. And we can see some of the results of this in this movie.

Which brings us back to Chris, an innocent victim of this clannish behavior, who reacts by telling a lie and now must find a way to substantiate it. To get help convincing everyone he is Jewish, Chris looks up his old childhood friend Adam (Joel David Moore).

Although at first Adam wants nothing to do with the charade, he later recalls the bonds of true friendship they shared in their youth and agrees to coach Chris on how to appear Jewish by teaching him some of the strange quirks of Jewish culture. This has little to do with religion; mostly it’s cultural stereotypes such as complaining about food, dropping Yiddish expressions into conversation, and taking calls from an overprotective mother every 15 minutes.

Adam has his own problems. He’s engaged to a woman (Jamie-Lynn Sigler) whom he doesn’t really love. So why is he marrying her? To please his parents who want to have Jewish grandchildren. And because he is so frustrated with his own culture, Adam has trouble understanding why Chris loves Jewish women and values certain Jewish cultural traits.

These may not be what Fogle calls “life or death questions,” but the premise of the film does raise themes worthy of exploration.

The problem comes in the comedic execution which revels in negative stereotype and bathroom humor. In the first fifteen minutes alone, there are jokes about an exploding septic tank, blackhead removal, big booties, and an attempt to eat dinner while two gynecologists are diagnosing a vaginal disease. Gentiles are equated with rednecks, Jewish women are portrayed as JAPs, and Jewish men are seen as weak and sickly. Other jokes include an elaborate scheme to feed a rabbi a bad piece of gefilte fish so that he’ll be too ill to play in a bridge tournament.

Some people may find this absolutely hilarious; I’m not one of them. I confess that there were some jokes I found genuinely funny and gave me a hearty laugh, but the majority of the humor turned me off.

I couldn’t help wondering if part of the reason the jokes fell flat was because of the medium of film. The movie was based on a stage play; although I never got to see it, I understand it was hugely successful. Some things that can work well on stage, thanks to theatrical conventions, may not succeed on film which is a much more realistic medium.

Take, for example, a joke about a character having a nervous breakdown attempting to have sex with an inflatable pool toy. I can imagine this over-the-top exaggeration being funny on a blank stage where a cast of eight actors portrays two dozen characters. The audience knows it’s not meant to be real—theatre by its nature is metaphorical—they get the point that a comedian is telling them that the character has gone crazy. But put the exact same joke on film and you send a contradictory message to the audience: a surrealistic act in a realistic setting. The brain doesn’t quite know what to do with it except dismiss it as absurd.

That’s not to say that “Jewtopia” fails. It has its moments. It has its points. If we can laugh at our own cultural quirks, we can better understand them. And we can better appreciate a renewed look at the things that drive us crazy through the eyes of someone who wishes he had them. This film’s mishugas may not be everyone’s cup of Manischewitz, but I’m sure it will make someone kvell with nachas.