A Sudanese Christian Boy Pretends to Be an Israeli Jew 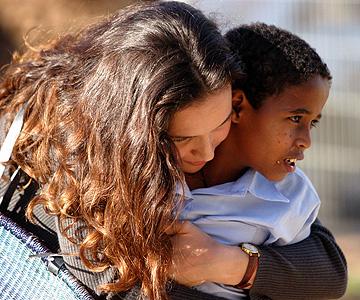 What does it mean to be a Jew? Is it merely a genetic thing—that one is descended from Jews? Is it a matter of ritual practices and beliefs? Is it living with and assimilating into the culture of other Jews?

The 2005 French film, “Live and Become” (“Va, vis et deviens”) examines these and other important questions by addressing the Falashas, the Jews of Ethiopia who are believed to be the descendants of King Solomon and the Queen of Sheba. In the mid-1980s, most of the Falashas were airlifted out of Africa, after having walked to Sudan, and repatriated in Israel.

“Live and Become” tells the fictional story of a Sudanese Christian boy who is in a refugee camp with many of the Falashas. (He is portrayed by three different actors: Moshe Agazai at age nine, Moshe Abebe in his teens, and Sirak M. Sabhat as an adult.) H

is mother (Meskie Shibru Sivan), recognizing the harsh realities of life as an African refugee, and the escape that the Falashas are about to have, gives her nine-year-old son to a Falasha woman named Hana (Mimi Abonesh Kebede) whose own son has just died. The boy assumes the name Salamon, which is later changed to Schlomo, and hides his Christian identity to find safely and a new life in Israel.

Upon arriving in Israel, Schlomo finds the culture clash difficult to deal with, but is even more disturbed by the impulsive separation from his real mother and then the sudden death of Hana. He’s sent to an orphanage where he has trouble fitting in. Then he finally finds a bit of stability when he is adopted by loving Israeli parents Yael (Yaël Abecassis) and Yoram (Roschdy Zem).

Why the Israeli authorities are so strict that only Falashas are allowed into the country and anyone discovered pretending to be a Falasha is sent back, is not clear. But Schlomo innately recognizes his survival depends upon hiding his Christian identity and adopting Jewish culture. Thematically, it actually has a lot in common with “Europa Europa,” which I reviewed several weeks ago, except in reverse.

“Live and Become” really is an emotional story, as Schlomo grows and deals with the problems of Israeli culture. You might be surprised (as I was) to discover how much racism there actually is in Israeli society.

For starters, authorities insist that the Falashas cannot keep their African names and are given new names, not all that differently from pre-Civil-War American slave owners who refused to recognize their slaves’ African identity. (The famous whipping scene in “Roots” where Kunta Kinte refuses to be called “Toby” comes to mind.)

Israeli society continues to struggle with its racism. The ultra-orthodox rabbinate refuses to accept the Judaism of the Africans and tries forcefully to have them ritually circumcised. Parents of Schlomo’s classmates demand he be taken out of school for fear his African culture or disease might contaminate their children.

And when Schlomo falls in love with Sara (Roni Hadar), her father (Avi Oriah) insists Schlomo is an evil person due to the color of his skin.

In an attempt to impress the father, Schlomo enters a Bible debate and addresses the controversial question, “What color was Adam?” He triumphs in the debate, but it backfires. Instead of winning over the father, it only scares him more, prompting him to forbid Sara from ever seeing Schlomo again.

History goes by: peace marches of the late 80s, the 1991 SCUD attacks on Tel Aviv, the 1993 peace accord, the 1995 assassination of Rabin. In time, Schlomo develops deep relationships with his adoptive family, particularly with his mother and his grandfather (Rami Danon).

He also forms a tight bond with Qes (Yitzhak Edgar), an older Falasha rabbi who mentors him. But Schlomo continually yearns for his real mother as he tries to come to terms with the reason she sent him away, and the meaning of her enigmatic parting words to him: “Go, live, and become.”

The film has a serious problem, though. In its final 30 to 45 minutes (out of two-and-a-half hours), the graceful tone changes. So much happens in the plot, as the filmmakers try to cram in so much of Schlomo’s adult life.

He goes to medical school in Paris, he falls in love and gets married, he has a major fight with his wife when she learns his secret, he serves as a medic in the army and gets wounded in a firefight, he gets a job with the Red Cross, and a few other important things.

It just feels really rushed and, in an attempt to keep up with everything, the viewer (at least me) losses his emotional connection with the film as it dashes to its conclusion.

A shame, because the first two-thirds of the film were so well done and really draw you in. This structural problem prompted one reviewer (Abigail Deutsch of The Village Voice) to remark, oxymoronically, that the film is both too long and too short.

Despite this major flaw, though, it’s still a good movie. The acting, by everyone in the cast, particularly by Yitzhak Edgar, Roni Hadar, and Yaël Abecassis, is powerful. The score is richly emotional. And the issues of integration and Jewish identity that the film addresses are vital.

It asks important questions. Is cultural assimilation good or bad, considering what is lost and gained? And what does it mean to be Jewish? Schlomo keeps asking himself this; deep down, he knows he’s a Christian, but he insists he feels Jewish.

Still he’s torn by the guilt of his genetic secret and fights against his desire to confess. But in his soul, is he Jewish or Christian? And what does it really matter, given the context of his life and the choices that he’s made?