The Man Who Captured Eichmann 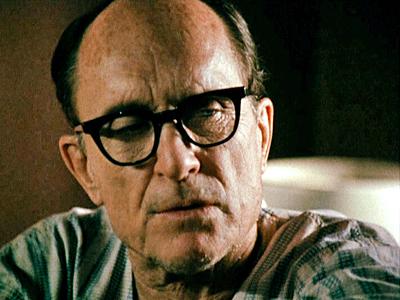 The 1996 made-for-TV movie, “The Man Who Captured Eichmann” gives us two amazing performances by Robert Duvall and Arliss Howard. Unfortunately, it takes about half the film before you can get to that.

Everyone knows that, in 1960, Israeli Mossad agents found SS officer Adolf Eichmann hiding in Argentina and brought him to justice for trial in Jerusalem.

This film tells the little-known story of how the agents were able to identify him, seize him, and hold him for ten days in a safe house before sending him to Israel. Duvall plays Eichmann and Howard plays Peter Malkin, the agent who headed the team that captured him.

The details, shown in the first half of the film, are mildly interesting. Specifics about who was on the team, how they worked out a plan, what went wrong and how they fixed it, which agents bickered with whom, etc. One of the more interesting details is that none of the men knew how to cook, so Israel sent a female agent halfway around the globe to cook for the men.

The biggest problem is that the key plot concerns—is this man really Eichmann, will he sign a paper recognizing Israel’s right to try him, and will they get him out of the country before the German-Argentinian private agents can stop them—which the characters worry about, are known by the audience before they even start watching the film.

But once Eichmann has been taken to the safe house, chained to a bed, and begins to talk with Malkin, things begin to get interesting.

The second half of the film plays out more like a character-driven drama as these two adversaries’ genuine attempt to understand each other turns into more of a debate. To quote the New York Times’ William Grimes, it’s “a confrontation between one man trying to understand what cannot be understood, the other trying to justify what cannot be justified.”

Malkin is mystified by Eichmann’s ordinariness and banality—how could such a man be responsible for the murder of millions?

Eichmann insists he was just following the law, running the trains, and had no concern or responsibility for what happened to the Jews after they got off the trains at Auschwitz.

Malkin confronts Eichmann with the death of his own sister who was on those trains; Eichmann remains unrepentant. “But she was Jewish,” he shrugs, as if it were not his fault or his care that the Third Reich had ordered innocent Jews to be murdered.

When another agent asks Malkin what Eichmann is like, he replies how inconceivable it is to understand: “It’s as if he wants admiration for how well he did his job.”

Duvall’s performance, in particular, is just chilling. One of the most frightening moments comes when he is explaining why he loved Hitler so much. “He made us feel how great we were and how great we would be again.” Seems to me I’ve heard someone else say something very similar not too long ago.

Forget the spy-thriller elements of the film—it’s these scenes between Duvall and Howard in the second half that make it. The chemistry between the two actors, as well as the intense topics they discuss, draw you in. (Interestingly, the two actors are friends in real life.)

If you want a tense spy thriller about the Mossad, there are many better films. But for powerful acting, this is the one to watch.