The Proper Care and Feeding of an American Messiah

Proof You Don’t Need Money to Make a Great Film 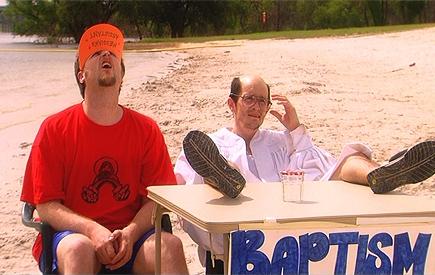 One of the funniest movies I’ve seen all year (and I mean 2006, not 2007), “The Proper Care and Feeding of an American Messiah,” was made for only $18,000. Now that may seem like real money to people like you and me, but in the film industry, where the average studio movie has a budget of $100 million, they’ll spend $18,000 just on catering for one day.

This proves that you don’t need real money to make a great film, just creativity and talent. And director Chris Hansen, who is a professor of film at Baylor University in Texas, proves he has this in abundance.

I first saw this movie at the Virginia Film Festival last October and now it’s out on DVD. Generally, I’m not crazy about comedies, but this one just really got to me—I just laughed hysterically through the whole thing. The movie is a mocumentary about a non-too-bright middle-aged guy named Brian (Dustin Olson) who thinks he is a messiah. Not the Messiah, but a messiah, who is to help the people who live within a 100-mile radius of him.

Somehow he doesn’t quite get the point of religion or being a savior. What are his beliefs? Well, number one, topping the list, he believes in a constitutional form of government. He also believes that the biggest problem besetting humankind is stomach-acid and indigestive problems; his solution is “Aunt Acid” pills.

His special powers, proving he is supernatural, included things such as growing facial hair at an extremely slow rate so that he only needs to shave every four days. The miracles he performs include “The Miracle of the Fruit” in which, when his brother Aaron (Joseph Frost) tosses plums to him from a distance of 10 yards, he can catch them in his teeth—that is about one out of thirty. His brother and sister Miriam are his only disciples. (Yes, his brother and sister are named after Moses’ brother and sister, and Brian is named after the lead character in Monty Python’s “Life of Brian.”)

The main plot of the film involves the three attempting to raise $500 to rent a hall at the local civic center where Brian intends to proclaim to the world—or at least the local area he is responsible for—that he is their messiah.

The various fundraising attempts include performing baptisms for $1.18, selling t-shirts which turn out to have a very funny misprint, and going door-to-door to offer house blessings for $33.99. (When asked “What does that do?” Aaron informs the perspective blessee that it will clean the baseboards, pooper-scoop the lawn, and give him three wishes.)

Naturally, most people want nothing to do with Brian and his “posse” of apostles. But when someone actually expresses interest in him, it turns out he’s even crazier than Brian.

The acting is just wonderful. Dustin Olson is absolutely hilarious as Brain—he really gives the impression that he’s improvising like in a real documentary. And his comic timing is just spot-on, particularly in a scene where he is caught rifling through his own garbage.

And the supporting cast is really great too. Ellen Dolan beautifully plays Miriam, the sister who thinks very little of Brian’s “messiah-ship” yet is so loyal, although even she has her breaking point. But Joseph Frost really stands out as the brother who is even more incompetent than Brian, particularly in a funny scene where he races a gliding Jesus figure against a toy racecar giving it a warped religious bent.

Also, there is a hilarious cameo by Tony Hale, best known to TV audiences for his work on “Arrested Development.”

I just couldn’t stop laughing through this whole movie. Yet despite the humor—or perhaps because of it—the film does deal with some rather important issues, such as those who misunderstand and/or abuse religion and also the need to feel important.

Unfortunately, for various reasons, it looks as though this film will be denied a major theatrical release, but it has just now been made available on DVD through CustomFlix, a company affiliated with Amazon.com.

The DVD comes with a second disc of extras including an hour-long documentary on the making of the film and a whole bunch of very funny deleted scenes including an absolutely hysterical church service that Brian runs. The link to order the DVD can be found here.

I definitely think it’s a movie worth owning. It epitomizes everything that is great about independent film and it’s just really hilarious too.