Something Different: Review Set to Rhyme 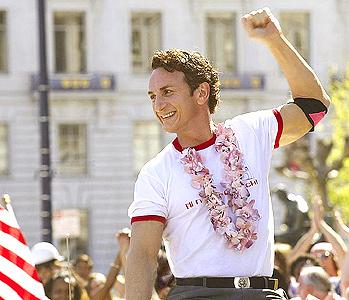 We all know that in our harsh world today
Some of the worst persecuted are those who are gay;
Even with gay marriage reaching new heights,
Homosexuals are still struggling for their rights.

Last fall, California’s controversial Proposition 8
Reminded us that there are still people filled with hate
Like bigots, evangelicals, and others of that ilk.
And so, into this environment, comes the movie “Milk.”

This fantastic film was just released on DVD,
And if you haven’t yet, you must go see.
It’s the story of Harvey Milk (played by Sean Penn,
In an amazing performance for which he won an Oscar again).

Who was the first openly-gay man elected to public position
In the US, though it wasn’t for personal ambition.
He was a great hero for the whole gay nation,
Though his life tragically cut short by assassination.

The movie portrays him as an idealistic guy
Who, when he failed, would try and again try.
In the Castro neighborhood he ran a camera shop,
But he couldn’t get discrimination against gays to stop.

So then he decided to do something wiser:
He ran for position of San Francisco Supervisor.
He ran several times but didn’t win.
But in the end that didn’t matter to him.

It was about speaking up and getting his voice heard,
And countering voices that were totally absurd,
Like those of Anita Bryant who said that gays
Were anti-God and should mend their ways.

Her crazy proposition endorsed by Christian preachers
Threatened to fire all of California’s homosexual teachers.
Harvey fought against this hateful proposition;
It was his goal; it was his mission.

In 1977, Harvey ran again for Supervisor;
And this time he had a new campaign advisor.
He worked real hard and got the help of everyone,
And on Election Day he finally won.

But Harvey’s nemesis is another man on that board,
Dan White (Josh Brolin, nominated for an Academy Award).
Their politics are so different, but in defiance,
The two men at first try to form an alliance.

But it doesn’t work, it’s faulty and wrong;
The two men just can’t get along.
Getting drunk and eating Twinkies, Dan insists he’s a player,
And soon has it in for both Harvey and the Mayor.

The film is suspenseful, terrific, exciting;
The screenplay is full of excellent writing!
And the supporting cast is a fantastic lot,
Like James Franco who plays Scott,

Harvey’s first manager and one of his lovers.
He’s great, and so are all the others.
Especially Emile Hirsch who plays Cleve Jones,
One of Harvey’s friends who finds courage in his bones.

And Diego Luna proves extremely capable
Playing Jack Lira, a lover who’s emotionally unstable.
It all comes together under the hand of Gus Van Sant
(Who directed “Good Will Hunting” and “Elephant”).

So now finally I’ve said what I have to say
About this film about a hero who’s gay.
But now it turns out that my experiment in verse
Ended up just making my review worse.

I wanted my evaluation to go so much deeper,
But the rhyme-scheme made it seem silly and cheaper.
Other reviews I didn’t want to mimic,
So I resorted to this shameful gimmick.

I see now “Milk” deserves more than a childish rhyme,
And I promise to do much better next time.
I tried and failed and tried again, God knows.
But don’t worry, my next review will be in prose.