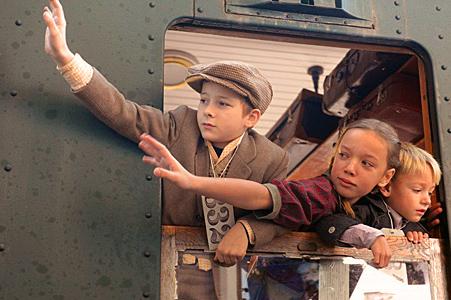 It was with sadness that I learned of Nicholas Winton passing last month, on July 1, at the age of 106. He is remembered as the “British Schindler” who saved nearly 700 Jewish children from the Holocaust. I think it would be a fitting tribute, to his memory, to re-watch the documentary “Nicky’s Family” which was first reviewed by Chizfilm in November 2012, as part of the Central Florida Jewish Film Festival.

The 2011 documentary, directed by Matej Minac, is an amazing film. Using not only newsreel footage but elaborate dramatic recreations on the scale of a feature film, this movie tells the story of Nicholas Winton. On the eve of World War II, he was a stockbroker who was moved by the plight of Czechoslovakian Jews whose lives were threatened under Nazi occupation. Through a series of many dangers including “bribes, forgery, secret contacts with the Gestapo, nine railroad trains, an avalanche of paperwork and a lot of money,” he organized a series of “kindertransport.” Winton managed to save the lives of 669 Jewish children, getting them out of Czechoslovakia and sent to foster families in Britain. Today, they and their descendants number nearly 6000 people, many of whom have gone on to great achievements.

“Nicky’s Family” brings together Winton and many of the children whose lives he saved. They are now adults in their 70s and 80s; Winton was 102 at the time the film came out. I don’t know which is more amazing, the original story of how Winton managed to save the children from the Nazis, or the story of how it all came to light, a lifetime later. The children never knew who it was who saved them until the late 1980s; the scenes where they meet the man to whom they owe their lives are tear-jerking.

Also incredibly moving are many of the dramatic recreations which show how a young Winton came to identify with the plight of the Czechoslovakian Jews, how hard he worked to find foster families, the actual train rides through Germany and Holland and the ship to England, and how warmly and generously the children were greeted by their foster families.

The most heart-wrenching scene is the one where the parents are putting their children on the train at the station in Prague. They know they are doomed and the only way to save their children is to send them away, not unlike the men on the Titanic who put their wives and children in the lifeboats. One mother pulls her young daughter off the train because she cannot bear to part from her; yet somehow she finds the inner strength to put her child back on the train.

“Nicky’s Family” is an extremely moving and well put together documentary. Much of the history dealing with the prelude to World War II is quite familiar; however, this film shows it through the eyes of innocent people whose lives were changed by these events, giving it a very personal perspective.

In later years, when Winton was publically recognized as a great hero, he insisted he did nothing extraordinary. “I just saw what was going on,” he once said matter-of-factly, “and did what I could to help.”

In this contemporary era when real life heroes seem so elusive, I think it helps to look back to the legacy of Winton for inspiration. If only all of us would do what we could to help.