How Weird, Really, Is It? 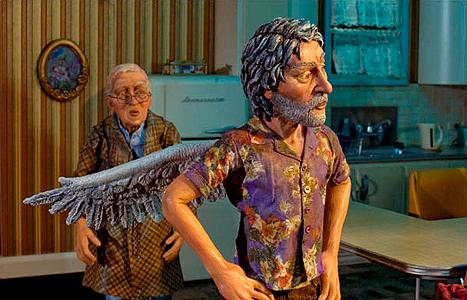 I discovered Israeli writer Etgar Keret about a year-and-a-half ago when he came to visit my hometown of Charlottesville, Virginia. In preparation for his talk, a group from my synagogue read and discussed a dozen of his short stories; they were unusual, to say the least. Extremely brief—few were more than three pages—every word pregnant with meaning, they read more like poems.

Keret’s stories were strange and surrealistic tales filled with characters like the wife who super-glued herself to the ceiling and then glued her lips to those of her philandering husband; a woman who spent her childhood sitting on the top of a refrigerator and now wanted to spend her adulthood alone; an amateur magician who inadvertently pulled the evils of the world out of his hat instead of a rabbit; and a Mossad agent who double-crossed himself and then tortured himself to make himself talk. Bizarre stuff. Keret’s fiction works better on a metaphoric rather than literal level; more like dreams than reality.

Because of this, I should have been prepared for the recent Israeli film “$9.99” since the screenplay was written by Keret. Yet my immediate reaction after seeing this clay-mation animated movie, which was populated with unusual characters in bizarre situations, was “This film is weird, even for me.”

But the more I thought about it, and as I recalled discussing Keret’s short stories, the less and less strange the film became. Sure, there’re some pretty unusual things in this movie, such as a frequently stoned college student who parties with three surfer-dudes the size of his finger, a very old man with enormous wings, and odd-shaped chairs that seem to be made of human flesh. But really, is this any more outlandish than mainstream films which feature a young man who can shoot spider-webs from his wrists, giant robots from space that transform into cars, or talking toys that organize a break-out from an evil day-care center? I now think this movie is a lot less weird than most summer blockbusters.

The opening scene of “$9.99,” which had a limited theatrical run in the US last summer, is quite the grabber. A man named Jim (voiced by Anthony LaPaglia) is approached by a panhandler (voiced by Geoffrey Rush) holding a gun. But he’s not robbing Jim; instead he says that unless Jim give him a buck for coffee, he’ll join his deceased wife; he points the gun to his own head and threatens to commit suicide. Jim refuses to be manipulated, but the tragic consequences of this chance encounter haunt him for the rest of the movie as he tries to come to terms with what responsibility he has to his fellow humans.

We soon meet other characters who live in the same apartment building. There’s Jim’s son Dave (voiced by Samuel Johnson) who is looking for a job, though not too enthusiastically. He’s much more excited by an advertisement for a book that promises to tell him the meaning of life for only $9.99. When he finally finds out the meaning, he’s anxious to share it with everyone, but no one is interested.

There’s Jim’s other son Lenny (the voice of Ben Mendelsohn) who works as a repo-man. “We’re not so bad,” he says. “Just like Robin Hood. Only in reverse.” He meets and falls for supermodel Tanita (voiced by Leeanna Walsman). She has an obsession with smoothness, so Lenny will do anything to please her, from shaving all his body hair to discovering the mystery of the strange flesh-like chairs she owns.

One of their neighbors is Ron (voiced by Joel Edgerton). It’s not clear how old he actually is, but he acts like a teenager with no sense of responsibility or self-worth. It seems he’s forever a few credits short of finishing college. When his girlfriend leaves, Ron gets drunk and stoned and turns to his three tiny (possibly imagined) companions who encourage him to stay immature, making jokes about belching and farting.

Also living in the apartment is a kid named Zack (the voice of Jamie Katsamatsas); he is given a piggy-bank by his father, who is encouraging him to save up for a toy he wants. But the pig teaches Zack far more than his father intends. Zack is drawn to the pig’s smile. When he discovers that the pig smiles just as much when no money is put in him as when a lot of money is put in him, Zack begins to realize that money has less value than other things. When it’s time for the piggy-bank to be broken open, Zack must figure out how to save the pig.

Then there is Albert (voiced by Barry Otto), a lonely old man whose wife passed away years before. No one will talk to him—not even the telephone solicitor. When he prays to God, an angle comes into his life—the panhandler from the opening scene who now has enormous wings (to quote the famous story by Gabriel Garcia Marquez). However he doesn’t act like angel; he’s bitter and sarcastic, he smokes, and he’s easily bored. He also refuses to fly. Perhaps all he needs is a little push from Albert.

All of the characters and their subplots are connected, physically as well as thematically. For example, there’s a brief but meaningful scene where Lenny and Ron meet in the elevator. Lenny tells Ron why he has shaved himself bald for his girlfriend, “You know what they say: ‘Without love, you’re nothing.’” Jealous, Ron replies, “You know what they say: ‘Good things never last.’” It’s a great contrast between the two characters and their philosophies on the value of compromising for love.

So in the end, what does it all mean? Can you really find out the meaning of life for $9.99—about the same price you might pay for a ticket to this movie? Do Etgar Keret and director Tatia Rosenthal reveal the secret in the final scene? Or will a conclusion that simply shows two of the characters trying to learn to swim like dolphins make you think “This movie is weird,” like I first did?

Now that I’ve had some time to reflect, I think there definitely is some meaning in this film. It’s not easy to put into words; rather you have to let it sink deep inside you, like a poem.

I say, take the risk and put down $9.99. You’ll probably get a lot more out of this film than you would watching a movie about a vampire fighting a werewolf—now that’s weird!