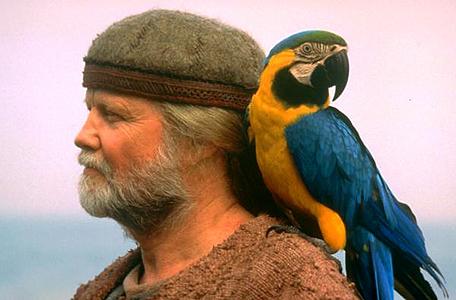 Why does it seem that almost all end-of-world disaster movies are lousy? Why does Hollywood always take a premise that has the potential to be dramatic, emotional, exciting, and heart-rending, and instead make it cheesy with bad acting, poorly-developed characters, and silly plot points?

I guess it’s an annual tradition in Hollywood, but now they have to do it twice year; the current “2012” comes only a few months on the heals of the absolutely horrible “Knowing.” But for some strange reason, audiences flock to these films. I guess there’s a little bit of masochism in everyone. Or maybe it’s just the voyeuristic desire to watch the hopefully-spectacular end-of-the-world from the safety of a theatre seat. Not too unlike the patrons at the Restaurant at the End of the Universe from The Hitchhiker’s Guide to the Galaxy series.

If you’ve gotten caught up by the recent “2012” hysteria and are obsessed with doomsday flicks, you might be tempted to check out movies with a Jewish, or Biblical, take on total destruction, such as the 1999 made-for-TV film “Noah’s Ark,” staring Jon Voight as Noah and Mary Steenburgen as his wife.

However I really hesitate to recommend it. Just like other disaster films, there is much that is poorly done in this one. I hardly know where to begin. The acting, with a few exceptions, is cheesy. Many of the jokes are silly or inappropriate given the enormity of the end-of-the-world situation. The style is sometimes too campy. The special effects are uneven—some are pretty good, but some seem really cheap and obviously fake. At two-hours-and-45-minutes, it’s way too long and drawn out. The voice-of-God is too casual to be taken seriously. And a sequence in the third act, where the humans on the ark start to go mad, is poorly handled and its resolution unconvincing.

However, by far, the biggest criticism leveled at the film, by both critics and audiences alike, is that the producers took far too many liberties with the famous story as it is recounted in the Book of Genesis, and even contradicts some of the details and chronology from the Bible.

In this vein, however, I feel a strong desire to defend the film, as a work of art. First of all, there’s a long tradition in Jewish culture of retelling Biblical stories with extra or even contradictory details. It’s called Midrashim. Or Apocrypha. This helps flesh out and gives new meaning and interpretation to old, thin stories. (I remember as a kid in the junior choir, participating in my synagogue’s musical cantata “Captain Noah and His Floating Zoo,” a delightful, light-hearted, contemporary take on the famous story. To this day, I still can’t get some of those catchy tunes out of my head.)

The most interesting, as well as the most radical, departure the film takes from Genesis is reversing the chronology of the Flood with the story of the destruction of Sodom and assigning the role of Abraham to Noah. In this version, Noah lives in Sodom, and is a friend of Lot (F. Murray Abraham, “Amadeus”). It is Noah, instead of Abraham who is not a character in this film, who pleads with God to save the city if he can find ten righteous people. Obviously, he doesn’t and the city is destroyed, with Noah’s family and Lot being the only survivors. Ten years later, God tells Noah that the destruction of Sodom was a warning for people to change their wicked ways; they did not so now He has decided to destroy the entire world by flood.

Although purists have been offended by this change, I actually found it a very interesting way of dealing with some of the structural problems of Genesis. Compared to the Flood, the destruction of Sodom pales, and it always seemed to me anti-climatic. Reversing the order gives it a more dramatic build-up, as well as making more sense, logically, with Sodom being an unheeded warning that leads directly to the Flood.

Also, I have listened to several devars comparing and contrasting Noah and Abraham: how Abraham pled for the lives of the citizens of Sodom but Noah did not plead for the lives of everyone in the world. In making this change, Noah now becomes a more righteous and sympathetic character, in the film, and more worthy of being saved.

In fact, there’s a neat, little scene shortly after the destruction of Sodom in which Noah and his wife wonder how it will be recorded by history. They complain that scribes often get the story wrong and, after it has gone through several versions, the scrolls will probably claim that they weren’t even there. It’s kind of funny, when you think about it. But purists, who want to take the Bible as literal, unalterable truth, could be offended by this suggestion.

However, there are some things for everyone to like about this film. For one, I was particularly impressed with F. Murray Abraham as Lot. He is not very nice, and he’s certainly not the Biblical Lot, but he’s quite an interesting character. He’s Noah’s friend and defender, but he enjoys violence and many other sins. After being saved from Sodom, he recognizes that he was not worthy, and yet gives in to temptation again and again. As time goes on, he turns into a pirate and murderer and ultimately challenges Noah.

There are also a number of good scenes. The section where the ark is attack by pirates (in an homage to, or satire of, the horrible 1995 movie “Waterworld”) was actually exciting and well put together, for an action sequence. The scene where Noah pleads to God to save the world was pretty powerful. And I particularly enjoyed a moment where Noah’s wife attempts to throw the tarantulas, cockroaches, and tapeworms off the ark. She says the world will be better off without them, but Noah explains to her the interconnectedness of all creatures and that “everything is worth being saved.”

I was also impressed with a few bits of serious theology thrown in. There are times when characters ask difficult questions such as why God created humans with the ability to choose sin, or when God tells Noah how much He has come to realize that He needs humans as much as they need Him. (I think that derives from Buber, actually; doesn’t it?)

So yea, there’s definitely some good stuff in here, mixed in with a lot of bad. Is it worth it? I don’t know. What I do know, is that at the end, when God promises Noah that He’ll never destroy the world again, I find myself wishing that Hollywood would make the same promise.

But I’m sure Hollywood will never stop destroying the world. All we can do is hope they get better at it.