Chizfilm Takes Issue With Other Critics 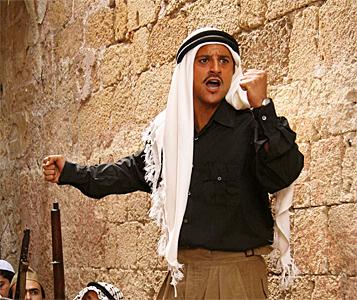 Since I rather enjoyed the 2007 movie “O Jerusalem,” a historical fictional account of Israel’s War for Independence, I was rather shocked to discover how vehemently it was panned by my fellow critics. Here’s a small sampling:

“Shaping the founding of the State of Israel into a middle school history lesson … it’s difficult to care.” — The New York Times

“It can’t decide if it wants to be history, drama, or a cry for peace in the Mideast.” — The Boston Globe

“But with so many events to include, the film is reduced to banalized highlights, making “O Jerusalem” seem like the Cliffs Notes version of the history of Israel.” — The Washington Post

Wow! One after another. Would I ever find a positive review? Finally I saw a link to a Christian movie review site. I thought to myself, “Okay. Finally. I bet they will have something positive to say about this movie.” But guess what Christian film critic David Criswell wrote:

“[The film was not] able to capture the great historical and prophetic events of 1948. … [W]hat I learn most from my studies of that time is that it was God who restored Israel. It was not because of anything that a man or a people did. It was solely because of what God did. God keeps His promises, regardless of our own worthiness.”

He didn’t like the film because it ignored prophecy and conflicted with his theology which downplays the role of humanity in history. Although Criswell didn’t specifically say, I suspected he wanted a film which would show the voice of God coming down on one side and supernaturally intervening on behalf of the Jews.

Yet, I think, the absence of a clear moral right and wrong is precisely why I liked the movie so much. The establishment of the State of Israel is, without doubt, one of the more controversial international events of the mid-Twentieth Century; therefore the carefully researched film should be praised for its objectivity and fairness to both sides of the conflict. While perhaps the Jews may come off slightly better than the Arabs, the film makes clear that there certainly were some despicable extremists on the Jewish side, such as the Irgun leaders who massacre a village, and some very honorable Arabs such as the Jordanian general who fights fairly and with respect.

The story follows two fictional characters, Bobby Goldman (J. J. Field) and Saïd Chahine (Saïd Taghmaoui), who meet in New York in 1946. Bobby is a Jew and Saïd is a Palestinian; on the other side of the world from the conflict, they can quickly become fast friends. But as the debate over the partition of Palestine heats up, both decide to travel there to fight for their respective sides. In the midst of the conflict, their friendship is severely tested. The deaths of Bobby’s friend and Saïd’s brother radicalizes them and they each rise higher in rank. Bobby meets Ben Gurion and Golda Meir (Ian Holm and Tovah Feldshuh), while Saïd pleads with the Arab League and King Abdullah of Jordan.

One of the most heartbreaking moments is when Bobby kills Saïd’s uncle during the Battle of Kastel and the two friends meet on the battlefield. That night, Bobby risks his life to try to save his friendship with Saïd.

“O Jerusalem” covers some of the same territory as 1960’s “Exodus,” but it’s much more gritty. It shows the horrors of war, rather than romanticizing the conflict.

The cinematography is stunning. Many scenes are bathed in warm, Mediterranean sunlight. And the sweeping background music helps draw you in.

Now, in fairness to my fellow critics, the film is certainly not perfect. I concede that it has some flaws. For one, it fails to explain a number of supporting characters. For example, when one of the important Zionists, Isaac (Élie Chouraqui, who is also the film’s director), cries over the death of his daughter Yaël, it wasn’t explained until that moment that Yaël was his daughter, nor had she been given much screen time as a character that we should care about. This is just one of several characters whom I wish were better developed.

Also, there are some unrealistic plot contrivances, and the film feels a bit too condensed for its epic scope.

But I take issue with the Boston Globe’s contention that the movie can’t decide between drama and history. While it does present history, and gives enough speeches and soundbites to characters on both sides to represent the bullet points of what they are fighting for, the film is not, nor does it pretend to be, a history lesson.

Ultimately this is a film about two good-hearted young men who are drawn into causes for which they are passionate, and regret that the tides of history strain their friendship and turn them into killers. It’s certainly not about God and prophecy and it offers no political solutions to the Middle Eastern conflict. Rather it intends to show the humanity in everyone on all sides. It’s a film about people and their attempts to remain human despite the overwhelming and violent issues of their times.

If my fellow critics can’t recognize that, well, I guess we’re just on two different sides. Somehow we’ll get by our disagreement without killing each other.