One Night With the King 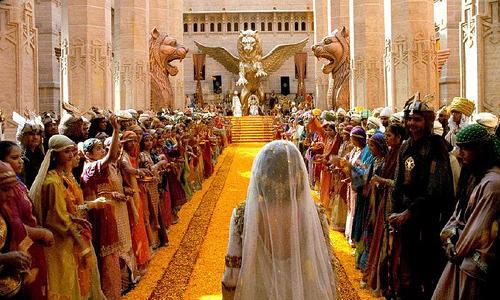 Two of the more fun traditions we have in Judaism are that of the Midrash and that of the Purim Spiel. Combine the two, add a little Hollywood magic, and you are likely to end up with something like “One Night with the King,” the 2006 film that dramatizes the Biblical book of Esther.

Like the best of Biblical epics, such as one of my favorite films, “The Ten Commandments,” the movie embellishes the original story and adds motivations and explanations that may be missing from the original text.

Purists may have trouble dealing with a more modern interpretation, but the average, contemporary filmgoer will find much to enjoy in this movie, which is based on the 2004 novel Hadassah: One Night with the King by Tommy Tenney.

The film doesn’t so much change the familiar story as it enhances it. For example, the original Biblical text mentions, in passing, the names of several of the King’s advisors including Memucan and Admantha, but we don’t really know much about who they are.

The film “One Night with the King” develops both of these as very important characters (played with great depth by Omar Sharif and John Noble, respectively). They have different points of view and head opposing factions within the court.

This allows Haman, like Iago, to cunningly play the two against each other. Haman pretends to be loyal to one and then betrays him to the other, allowing him to rise quickly within the political structure. Here, Haman is a master of the complex and deadly game of palace politics.

In some of the scenes, Haman can be very manipulative by being understated, and in others he shouts like Hitler as he tries to enrage a crowd with anti-Semitism. James Callis, who plays Haman, makes the perfect villain.

Another important addition the film makes to the Biblical Esther is the role of Hegai the Eunuch, played by Tommy Lister. In the original text, he is only mentioned briefly, but in the movie he becomes a very important, sympathetic character. At first he doesn’t think much of Esther as he prepares her to be judged by the King, but as he gets to know her, he comes to favor her above the other contestants, giving her advice and other positions of advantage.

And it probably goes without saying that Esther, too, played by Tiffany Dupont, becomes a much deeper and more complex character than she appears in the original text. Early on, she is deeply devoted to her people and is in love with a young Jew named Jesse ben Joseph (Jonah Lotan) who is never mentioned in the Bible.

She is quite intelligent and literate in several languages—unusual for a woman of her time—and quickly recognizes the opportunity she has, if she were to become Queen. She regrets that she must reject Jesse for the chance to have a real impact on the Jewish people.

And when at last the hour comes for her real mettle to be tested, she must risk her life to try to save the Jewish people. This is very hard for her, but somehow she gathers the inner strength that she needs to appear before the King without being sent for.

The film also answers some age-old problems with the Biblical text that scholars have wrestled with. For one, who was this King Ahasuerus? There is no mention of him in the records of the Persian Empire. Some scholars think Ahasuerus was simply another name for Xerxes I, the Persian king who invaded Greece in 480BC. Perhaps he was his grandfather. Or his grandson. It’s hard to know for sure. Some scholars think there never was such a historical King; they believe that Ahasuerus was made up and, furthermore, the entire book of Esther is just a fictional story.

So how does the film answer this question? “One Night with the King” declares that Ahasuerus is indeed Xerxes I and gives him that name. More importantly, his invasion of Greece plays a huge role in the movie.

The story is set immediately prior to the Greek invasion as the King (Luke Goss) and his advisors debate whether or not to go to war. There are pro-war camps and anti-war camps. And as public opinion is being whipped up against the Greeks, Haman tries to associate the Jews with the Greeks, calling them “Greek Democracy-lovers.”

Another important question, of course, is why does Haman hate the Jews so much? In Biblical Esther, Haman is incensed because Mordecai won’t bow down to him. But that made little sense to scholars who note there is no Jewish law that says a Jew cannot bow to a person of higher rank.

So the film invents a new motivation, going back five centuries prior to when King Saul wipes out all the Amalekites, enemies of Israel, but refuses to kill their king, Agag. (This scene is shown briefly in a prologue in which Peter O’Toole plays the prophet Samuel who orders Saul to kill Agag.)

According to a Midrash to which this film subscribes, Agag’s heir escaped and Haman is descended from him. Now supposedly, for five centuries, the offspring of Agag have held a grudge and have vowed to wipe out all the Jews as revenge for killing all the Amalekites. Haman sees himself as the ultimate executor of that revenge.

Haman takes advantage of Xerxes’ need for money for the war campaign and convinces the King that the Persians should kill the Jews and take their money to pay for the invasion of Greece. Now Mordecai (John Rhys-Davies, in another excellent performance) has real reason to hate Haman and refuses to bow. This makes a lot more sense than the Biblical version.

Anther issue that always perplexed me was the heroine’s two names. In Hebrew she is called “Hadassah” and in English it is translated as “Esther.” I am told that “Hadassah” is a Jewish name and that “Esther,” at least prior to this moment in time, was not a Jewish name. That never made any sense to me.

The movie, however, explains this perfectly. She was born “Hadassah” but when she was taken to the palace and Mordecai told her not to reveal she was a Jew, he gave her a new non-Jewish name, “Esther.” Now that makes perfect sense and clears up that confusion.

Also, why had Esther not been sent for by the King for such a long time? The Bible never explains why she may have fallen out of favor. But the film gives a good explanation: due to a misunderstanding, the King mistakenly thinks that she has been unfaithful to him, just as Othello falsely thinks Desdemona has been adulterous. This makes Esther’s appearance before the King all the more brave.

One other interesting textual problem that the film solves is in the final scene, at the banquet. According to Biblical Esther, immediately after Esther accuses Haman of plotting to destroy her people, the King leaves for a few minutes and then returns. No reason is given. I don’t want to ruin the ending, but the movie does give a good motivation for that.

And one other interesting thing is that according to the original text, after the King leaves, Haman begs Esther for his life. I can see why the filmmakers would not want to include that, as it would make Haman too sympathetic. So they found a great way to be true to the letter of the text while still making Haman despicable.

Watching a film like this can remind you that sometimes the greatest storytellers are not the ones who come up with an original story, but those who take someone else’s story and make it better, more believable, more engaging. I think, in many ways, the movie “One Night with the King” can be more meaningful to a contemporary audience than the original text which was written for an ancient audience 2500 years ago.

So next Purim, if you can’t make it to your local synagogue for their Purim Spiel with new Midrashim on Esther, pop in “One Night with the King.” It’s the next best thing to being there.