Israel Responds to Terrorism in the 1970s 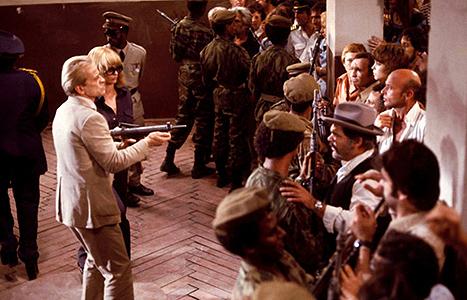 You may not believe it, but I clearly recall the events of July 4, 1976, even though I was only eight years old. I remember feeling patriotic watching the great ships sail into New York Harbor on TV; I remember shooting off caps in the afternoon and waving sparklers in the evening; I remember watching, for the first time, the movie “1776” which would later become my favorite film of all time; I remember pride at flying the American flag. And I also very vividly remember what happened that morning:

I went out into the backyard to play, all excited because that day was the 200th birthday of my nation; I had been looking forward to it for quite some time.

My mother came out into the yard and she had tears in her eyes. I asked if she was sad and she said no, she was crying tears of happiness. “Because of America’s birthday?” I asked.

“No,” she said. “Did you hear about this hijacking?” Well, actually, I really did have some vague notion about it. I was eight and didn’t understand, but I had heard adults talking about hostages and I understood that something bad had happened to Israel and the Jewish people.

My Mom said, “Well, this morning, Israel launched a raid and they rescued all the hostages. All of Israel is celebrating right now. The celebration is as great there as the celebrations here.”

I was rather stunned. Though only eight-years-old, I sensed that a historical moment had become doubly historical. In the few years that followed, I learned more about the famous “Raid on Entebbe;” I read a book about it and saw all the movies.

The other day, more than three decades after the raid, I re-watched the Israeli movie, “Operation Thunderbolt” (“Mivtsa Yonatan”), which was made a few months afterwards and released in 1977.

The film, for the most part, is a pretty accurate retelling of the story of Air France flight 139 which originated in Tel Aviv, stopped off in Athens where airport security was lax, and was then hijacked in late June, 1976. The passengers were taken hostage and flown to Entebbe, Uganda.

The non-Jewish passengers were released, but the terrorists, who represented the Popular Front for the Liberation of Palestine (a splinter group of the PLO), threatened to murder the Jewish hostages unless the Israeli government release 40 terrorist prisoners.

Early on the morning of July 4, only hours before their scheduled execution, an elite group of IDF commandos flew to Uganda and rescued the hostages.

From an artistic point of view, “Operation Thunderbolt” is a well-crafted film. There is good acting from an international cast. Yehoram Gaon plays Yonatan Netanyahu, the leader of raid (and older brother of Benjamin Netanyahu who later became Prime Minister of Israel). Jamaican actor Mark Heath plays a very egotistical Idi Amin (he’s scary, although his portrayal really pales compared to Forest Whitaker’s chilling performance in “The Last King of Scotland”). And the famous Polish actor Klaus Kinski, perhaps best known for his work in Werner Herzog’s “Fitzcarraldo,” plays Wilfried Boese, the head terrorist who was a German allied with the Palestinians.

Overall, it’s a feel-good movie. The patriotic music swells and the Israeli flag flies overhead; the audience is made to feel proud of nationalism and Zionism. You can return to the simpler time of the 1970s when issues seemed more black-and-white; you didn’t really have to wonder why the terrorists were doing this because they could be easily dismissed as evil bad-guys.

For the sake of simplicity, some things were left out of the film. For example, it was discovered that an Israeli company had actually built the terminal at the Entebbe Airport, so they were able to furnish the army with exact plans of the building. A Mosad agent was able to help gather intelligence by posing as an African pilot with engine trouble.

And the runway lights were still lit because a British Airways flight was scheduled to refuel at Entebbe shortly after midnight, so the commandos carefully timed their landing to coincide with that. By omitting details like these, it almost gives the impression that the raid succeeded based on luck or divine providence, but really every detail was carefully planned.

I was also a bit disappointed that the film completely omitted the cabinet’s debate. Perhaps one might argue that the fact that the raid was eventually approved, and its relative success, rendered the debate moot, but I would disagree. I’d really like to know what were the other options the government was considering. If the raid had failed, it would have made a bad situation 100 times worse. Maybe 1000 times worse. It was quite a gamble for the Israeli government.

So, in the end, how successful was the raid? Well, the movie has a happy ending, but it certainly wasn’t 100% perfect. There were 107 hostages, but only 103 returned alive. Three were killed in the crossfire and one, who was left behind at the hospital, was murdered by Amin a few days later. The mission leader was killed and several IDF soldiers were seriously wounded.

And the raid certainly didn’t deter future terrorist attacks. Three decades later, the Israeli-Palestinian conflict is worse than it was in the 1970s. The raid can be viewed as a small victory in a long, on-going war that has no solution in sight.

Can, or should, “Operation Thunderbolt” be considered a political film pushing a particular agenda? Some argue no. They say, well, if it had been completely made up, perhaps; but it’s basically a straight-forward, slightly-romanticized account of a true, historical moment when good triumphed over evil that we should rightly be proud of.

Others, however, say of course it’s political. The film argues that the best way to deal with terrorism is to meet force with force. It promotes the belief that terrorism can be combated with a small but elite squad of commandos. The military solution is the best solution; complex political issues are best solved by violence with a minimum amount of casualties on the side of the good-guys, the side of God.

If this is the message of the film, it doesn’t hold up well in the 21st Century. The issues of terrorism are far more complex in the post-9/11 world. International politics and world opinion have changed, as have terrorist tactics. The ability to launch a raid to free hostages is no defense against a suicide bomber.

“Operation Thunderbolt” may have been a great reflection of the way Israel viewed terrorism and the appropriate response to it in the 1970s, so it may be fine to look at this film from a historical point-of-view. But what about today? Are there any recent Israeli films that deal with the current Israeli response to terrorism?

Well, keep checking Chizfilm Jewish Movie Reviews to see. Who knows, there might be a review of one very soon.