Should You Stay Away Today? 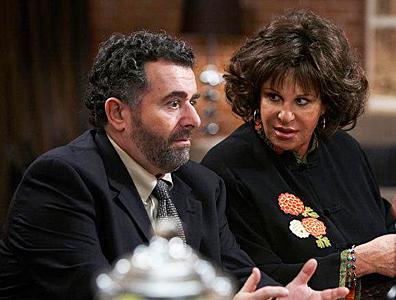 The 2009 comedy “Oy Vey! My Son Is Gay!!” (yes, that’s correct—there are three exclamation points in the title) seems like a relic from a less innocent time.

Today, in 2015, when homophobes have lost the fight against gays in the military, gay adoption, gay marriage, and all they can hold on to is the right of a hypothetical baker to refuse to make a cake for gay wedding, it’s fair to say the culture war is over. It’s easy to forget how brutal times were for gays a few short decades ago.

In the 1990s, parents freaked out if their children came out as gay; that was a thing back then. It’s hard to imagine most parents reacting that way today unless they come from isolated, conservative communities. That’s why “Oy Vey! My Son Is Gay!!” shocks contemporary sensibilities. It came out at the same time as Gus Van Sant’s “Milk” (a serious drama about gay activist Harvey Milk starring Sean Penn), but by comparison, this film seems pretty juvenile.

“Oy Vey…” is an over-the-top comedy that focuses on the Jewish parents of a gay man in his 20s (John Lloyd Young) who finally faces his fears and comes out because he now has a serious relationship. He chooses the incredibly inopportune moment of the middle of someone else’s wedding vows to come out to his mother, Shirley (Lainie Kazan), and father, Martin (Saul Rubinek, “The Quarrel”).

The parents overreact very immaturely. They blame each other for “what went wrong” with their son. Martin, in particular, proves quite sexist as he boasts of his masculine bravado to defend his heterosexuality.

The near-unsuccessful attempt to come to terms with their son’s homosexuality takes the parents down some silly misadventures including a counseling session with a Freudian therapist who spouts useless theories and a visit to a gay club where Martin runs into a co-worker (Heiko Obermöller) in drag, and his brother-in-law, Max (Bruce Vilanch). Are Martin and Shirley more shocked to discover that Max is bisexual or that his sister-in-law knows and doesn’t mind that he’s getting some gay action on the side? The most ludicrous moment comes when Martin tries to convince a Playboy model (Carmen Electra) to sleep with his son, hoping against hope that she can “convert” him to heterosexuality. She, of course, knows that it doesn’t work that way.

The characters of the younger generation, most notably the sister (Alexandra Mamaliger), have no problem with someone else being gay. They accept it as a normal part of life. I found myself wishing there was more of the sister to represent a more rational tone; I also kept expecting her to call out her parents for being such bigots, but she never did.

The third act takes a strange turn. To deal with the strain the parents are putting on the relationship, the gay couple decides to adopt a child and then go public with the controversial (for the time) act—it seems like that would put more strain on the relationship rather than less. And they skip the important step of getting married first. I had to remind myself that in 2009 gay marriage was not yet legal in New York.

Oh, did I mention this was taking place in New York? That most blue of blue states. If I said this was set in Mississippi or rural Iowa you’d have no trouble believing it. But New York? Apparently the filmmakers considered this setting to be an important point because the opening shot is of New York City. I guess they wanted to emphasize that even within a progressive bastion like New York, there are pockets of religious bigotry.

But is it really religious? Despite the emphasis on the family being Jewish, there is really not a lot of Judaism in the film. Oh, there’s a sprinkling of Yiddish, Jewish symbols are in the background, and there is a lot of loud, stereotypical yelling. But the parents never go to their rabbi seeking spiritual guidance. The question is never asked whether Judaism should show compassion or condemnation for gays. Unlike anti-gay Christians, they never quote Bible verses.

Rather, the prejudice just seems to come from a general culture of misunderstanding. Like most bigots, they don’t really have a rationale; they’re just afraid of differences. It’s rather disgusting and I kept asking myself, do I know any Jews like this? Although I certainly hoped the answer was no, the more I thought about it, I realized, unfortunately, that yea, there are still a few. I guess that is a problem with the Jewish community that shouldn’t be ignored.

So the bottom line is that this film has many flaws, from a critical point of view, but its heart is in the right place. Its message is that if you are of the older generation and you have a problem with your child being gay, you are a silly, ridiculous, out-of-touch fool. Yet, with a little help and some love, it’s quite possible to overcome that buffoonery.

I can’t argue with that.