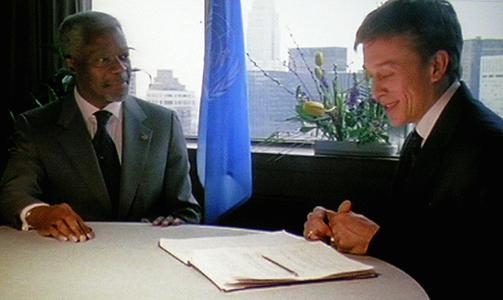 During these Days of Awe, the traditional ten days of reflection between Rosh Hashanah and Yom Kippur, I’ve been thinking a lot about peace in our world—or rather the lack of it.

As one US war—in Iraq—winds down, another—in Afghanistan—heats up, a war with Iran is being threatened, distrust grows between religions, and countless other conflicts on this planet have no end in sight, peace seems ever elusive.

Yet I struggle to keep that harmonious vision and manage to find ways to inspire my soul. A few days ago, on the ninth anniversary of 9/11, I participated in a “White Flags” peace vigil which reminded me how much the human family has in common.

Nearly a hundred people of all races and religions gathered on the Charlottesville Downtown Mall, each holding a flag of a UN-member nation, all in white to symbolize the eventual fading of nationalism and uniting of humanity.

It was a powerful moment for me, personally, and I drew much inspiration from it. It was appropriate, for these Days of Awe, to resolve to be more civically active and to help bring peace to our world.

International Peace Day, which is only a few days away now, on September 21, is the perfect opportunity to rededicate oneself to the cause of peace.

There are many ways to get involved — but if you can’t participate in a specific event, perhaps the second-best way to commemorate the date is to educate yourself about it by watching the documentary “Peace One Day,” which chronicles the difficult two-year process of getting the United Nations to create the day.

The idea was originally conceived by Jeremy Gilley, a British actor/filmmaker turned activist, who wondered if for one day, every year, it would be possible to get the warring nations of the world to declare a 24-hour cease-fire, saving lives and giving combatants a pause to ponder and reflect on what they are doing. Perhaps it might lead to a more permanent peace.

It could also have some very practical benefits as NGOs like Oxfam, for example, could get food and aid into combat areas without fear of being attacked; health care workers could vaccinate children; information could flow freely in and out of war-zones.

Gilley turns his camera on himself as he launches his campaign in September 1999. He travels to many war-torn places on the planet to collect evidence of the harm violent conflict causes, which he will then present to the UN, through its ambassadors.

One of the first places he goes to is Somalia. There he sees heart-breaking images and hears tragic stories of babies sucking the breasts of their murdered mothers lying in the dust, and of a 12-year-old boy who is forced to fight a war he doesn’t understand.

Later, Gilley travels to Israel where he witness a small gathering of Jews and Arabs attempting to talk to each other about the conflict, and he meets Shimon Peres who tells him, “We must teach our children the history of the future” rather than the hatred of the past.

Although he cannot get Yasser Arafat to talk to him, he does speak with one of his ministers, Hisham Abd El Raziq, who tells him that in his youth he attempted to kill Israelis but after spending 21 years in prison, he emerged a changed man desperately wanting peace; he now negotiates with the Israeli government.

And Gilley asks a typical Israeli soldier what peace means to him. He responds, holding up his rifle, “It means I’ll one day break this weapon. Peace means my children won’t even know what this is.”

With the desperate peace yearning by actual combatants as a prime motivator, Gilley gets down to business. He needs to convince the UN to pass a resolution declaring World Peace Day. As it turns out, there actually already is an International Day of Peace, on the second Tuesday of every September, to—sort of—coincide with the opening of the General Assembly, but no one knows about it because it always changes; Gilley feels that it needs to be a fixed date so that everyone will always know when it will come.

He suggests September 21, to honor the 21st Century, as well as being the equinox. More importantly, though, the new resolution must declare World Peace Day to be a Global Cease-Fire Day. All he needs is two nations to co-sponsor the resolution and for the General Assembly to pass it. Peace [sic] of cake, right?

Gilley contacts every Nobel Peace Laureate to help him. The first to respond is Oscar Arias, the President of Costa Rica at the time. Costa Rica agrees to co-sponsor the resolution. He also manages to get the UK, his home nation, to be the second co-sponsor. However it turns out that getting these two nations to agree on all the details is a lot more complex than it sounds. More than once, it seems the deal has fallen through.

Gilley pushes for Peace One Day, traveling the globe, gaining support of the world’s children and various governments. He meets the Dalai Lama who agrees to help. He travels to Sydney, Australia for the 2000 Olympics to attract attention to his global cause, though he meets very little success there.

He also gets an invitation from Amre Moussa, the Secretary General of the League of Arab States, to address the representatives of 22 Arab nations in Cairo. He begins his presentation as he always does by showing a quick video which includes interviews with Nobel Laureates. It hadn’t occurred to him, in advance, to edit out Shimon Peres; he was completely unprepared for the firestorm ignited by that brief clip.

When the video ends, instead of making his usual plea, he is attacked for being biased by the Arab ambassadors, most particularly Mohamed M. Sobeth, the ambassador of the Palestinians, for including the statement from Peres. Though Gilley affirms he’s not taking sides in any conflict, it falls on deaf ears, and he leaves the meeting completely unsuccessful. International diplomacy, he learns, is far from simple.

Finally, on September 7, 2001, the World Peace Day resolution is ready and comes before the UN General Assembly for a vote. Gilley appropriately captures that amazing moment with profound joy.

From the film’s highest moment, we cut to its lowest, four days later.

It is the morning of the 11th, the second Tuesday of September. It will be the last rotating World Peace Day. That morning, there is scheduled to be a ceremony in the UN Garden where Kofi Annan will ring the Peace Bell and will then announce to the World Press that from now on, starting in 2002, World Peace Day will be celebrated as a day of Global Cease-Fire on the 21st of September every year.

Gilley is invited to the ceremony and he anxiously awaits its start. I don’t think I need to tell you what will prevent this ceremony from taking place. It’s a powerful moment.

Overall, “Peace One Day,” is an extremely moving film. Far more than a civics lesson in how to get a UN resolution passed, it’s a profound look at the problems violence causes in our world and how a single man can start a movement and actually do something to help stop war and save lives. It’s truly inspiring.

The film concludes with a rather poignant scene where Gilley has a candid heart-to-heart talk with Amhad Fawzi, the UN Director of Public Information, who had been advising him throughout the process.

They discuss why the reality on the ground doesn’t always reflect the ideals on paper, yet this one day of peace every year can be a real start to changing the culture of the world—from a culture of war, to a culture of peace. The idealistic vision will someday come true, and eventually we will have peace one day.