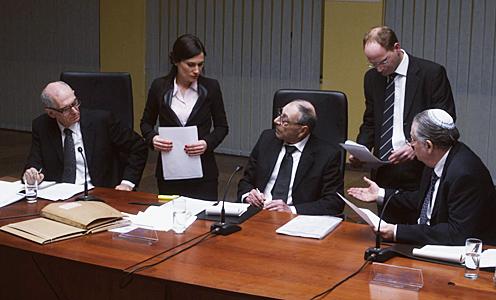 Twenty years is a long time. It can turn an idealistic young man into a cynical middle aged man. He can forget the passion of his youth, the deep feelings of hope he had for the future as he looked to inspiring leaders who were trying hard and risking their lives to change things.

The young man I am referring to is myself in the early 1990s and the brave leader was Yitzchak Rabin, a man who led his nation in war and came to realize that only peace could bring security to his people. And in a way they were my people, too. In that sense that every Jew feels himself as an Israeli.

That day, that horrible day, November 4, 1995, I cried. With Rabin’s death, hope began to slowly slip away. Peace in the Middle East, which until that moment was seeming more and more possible, was now becoming more and more elusive.

My life went on. I went from my twenties to my thirties to my forties. One bit of reality after another chipped away at my idealism. In my personal life, in my society, in the world. I saw my country go to war with two Middle Eastern countries and I saw Israel become more and more stalwart in the status quo. The more it refused to bend, the more violence was unleashed against it. Rabin’s political opponent, Benjamin Netanyahu, took power and saw to it that Rabin’s dreams of peace would be forever crushed, as the Israeli Left vanished into the ether.

And as I watched walls go up and suicide bombers attack and Palestinians oppressed and settlers given free passes by the government, I forgot how much I loved Rabin and how much hope, two decades earlier, he had given me.

I forgot. I forgot.

That is until the other night when I went to the movies and watched Amos Gitai’s latest film, “Rabin, the Last Day.”

Like Oliver Stone before him, this great Israeli filmmaker released this movie (which is now making the rounds in the US in a limited run) last year to confront the consequences of a political assassination which have haunted a country for nearly a generation. And as I watched this movie, I realized that I too was part of the targeted audience that Gitai was trying to reach and say, “Remember! Remember how you felt then? How times have changed for the worse—and it was this event that changed them.”

That was exactly the same thing that Oliver Stone was trying to do in 1991 with “JFK,” 28 years after the assassination of President Kennedy. Americans loved Kennedy, but there was a radicalized right wing faction that considered his changes a threat to their interests and took him out, reversing the course of society. Instead we headed into Vietnam and an unwinnable war. Stone used incredibly artistic cinematic techniques juxtaposing scenes of Kennedy’s assassination, the conspirators discussing their motivations, and the aftereffects of the political reversal. It was a deeply touching film that hit the heart of many Americans.

Gitai’s film, likewise, does the same. The setting and the details are different, but the story is quite similar. Actual footage is skillfully blended with dramatic recreations. The speech and peace rally at Tel Aviv’s Kings Square (now known as Rabin Square), followed by his exit from the stage toward his limo and three shots fired by Yigal Amir. The rush to the hospital and the final announcement on television of Rabin’s death. A nation mourns.

The judges appointed to investigate the assassination are instructed to focus only on security lapses and physical details, not politics. But as the investigation unfolds, it quickly becomes painfully obvious that they cannot ignore the political issues revolving around Rabin’s signing of the Oslo Accords and the growing anti-peace sentiment fostered and encouraged by Likkud. In the months leading up to the assassination, we see ugly rallies where right-wing supporters burn effigies of Rabin dressed as a Nazi and yarmulke-wearing people chant “We’ll get rid of Rabin with blood and fire!” Who is addressing the crowd and spurring them on? Likkud’s leader, Benjamin Netanyahu. (No, that’s not a typo. I am referring to the current Prime Minister.)

Even crazier things are seen. A group of ultra-orthodox rabbis pronounce a Din Rodef on Rabin. What’s a Din Rodef? It’s a curse from the Talmud which allows someone to be killed with impunity because they endangered someone else’s life. It’s an obscure and hardly used law. Supposedly it was only pronounced on one other person in all history, and that was Leon Trotsky. I strongly doubt it was intended by the Talmudic rabbis to be a political tool.

Perhaps the craziest scene in the film depicts a woman psychologist (Dalia Shimko) addressing an extremist anti-Rabin group. She tells them that in her professional opinion, Rabin is schizophrenic and that his use of the word “I” makes him a megalomaniac, just like Hitler.

What on Earth is one to make of this scene? I thought of her like I think of the one scientist in 100 who denies global warming. That “person of science” is embraced because their warped interpretation of the facts gives support to some crazy political group which would like to have some sort of so-called “science” to justify its agenda.

And finally we come to the assassin himself, Yigal Amir (Yogev Yefet). We see his ties to the settler movement. We see how he is influenced by religious right-wing extremism. He smiles with pride during his interrogation. He recites the Shema when he is locked up.

We see his devotion to the religious laws immediately after his arrest when he is fingerprinted. A woman officer takes his prints and he requests that a man take his prints. In his mind, it’s fine to murder a human being but he must not violate God’s laws forbidding the touching of a woman.

That moment in the film immediately took me right back to an incident a few days earlier when my wife and I met an orthodox rabbi and he would not shake my wife’s hand. Not to equate this nice rabbi with Yigal Amir, but it just gave me an uneasy feeling as he placed some ancient and irrelevant law above respecting my wife.

And then I thought of the growing hostility on the extreme Right, in this country, as evidenced recently by Tea Party and Trump rallies. I realized that the ugly political mood Gitai’s movie was depicting in Israel was not too different from contemporary America. “Rabin, the Last Day” could serve us more as a warning than a melancholy reflection on what went wrong twenty years ago. Politics is often dirty, but the vast majority of people agree that murder should not be part of that game. But the more vicious anger is encouraged and escalates, the more likely we are to see violence.

I no longer have that youthful burning passion to go out on the street holding a sign and chanting “All we are saying is give peace a chance.” Every suicide bomb, every kidnapping, every little skirmish, beats down that hope that a permanent solution will ever be achieved. But watching this movie reminded me that even twenty years of failures doesn’t destroy that wish, that yearning for a more just and peaceful world.

And I am also reminded that age doesn’t always and necessarily trump idealism. Yitzchak Rabin was 73 years old when he died, and the older he got, the more passionate he became about his ideals. His love for his country and his increasing desire to protect Israel with a just and stable peace only intensified with age. The more time went on, the more hope he had, the more fervently he struggled to find middle ground with his enemies. That’s why he went to Oslo. That’s why he shook Arafat’s hand on the White House lawn.

As I approach the half-century mark of my life, and I think back over the cynical changes I’ve seen in myself in the last two decades, I am glad to be reminded, by this film, of Rabin and the hope I had placed in him. I realize that my ideals are something I still need to cling to. There are things that are worth fighting for. And even things worth dying for. Although nothing, as Gandhi said, is worth killing for. Rabin gave his life for a chance at peace.

For a time, it seems the haters and the killers, on both sides, will have the veto power over any peace and that the only way this could end would be for one side to completely obliterate the other. But eventually there will come a moment when both sides realize that that is not tenable and a peace will be reached and, over generations, it will become stable. People will think, how could we have ever wanted to kill each other, just as the US and England now do, when looking back at the American Revolution.

This is what Rabin dreamed of at the end of his life. It didn’t come about in 1995, as he had hoped. Not everyone was ready for peace—and politics and religion played a big part in that. But someday it will come. We cannot give up that hope.