What Is the Jewish Response to Misfortune? 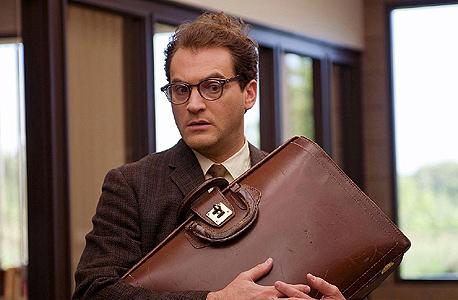 A few people who know me personally might be aware of what a horribly rough time I had this past summer. On top of financial, career, and romantic problems, and a dear friend being sent to federal prison, I developed an unbearable case of tinnitus for which I was told there was no cure. When my father came to see me, he slipped, broke his rib, and I had to take care of him for six weeks. Then my girlfriend and I broke up. I dare confess, at this lowest moment of my life, thoughts of suicide whispered an ultimate solution.

Thank God, my tinnitus has improved and my life is moving on again, but for a while I was plagued with serious questions. If there is a God, why is He allowing these things to happen to me? Am I being punished or tested? Or is it just rotten luck—bad things happen—that’s what life is about and I just have to accept my fate?

Because of this, I could very strongly identify with Larry Gopnik (Michael Stuhlbarg), the main character of the latest Coen brothers’ film, “A Serious Man,” which is currently playing in theatres. Larry, too, has a series of mounting problems which leads him to a crisis of faith.

In the movie, which is set in 1967, Larry teaches Physics at a large university. In an early scene he confesses that the mathematics which underlie the physics give him certainty, but the larger questions, such as the uncertainly of whether or not Schrödinger’s Cat is alive or dead, make him uncomfortable.

Slowly, his life starts to unravel. Minor problems like a student trying to bribe him for a grade, a feud with a neighbor over a property line, constantly bad television reception, and increasing stress over his upcoming tenure review and his son’s Bar Mitzvah, are overshadowed by larger concerns such as his down-on-his-luck brother (Richard Kind) being arrested for gambling, and his wife (Sari Lennick) asking for a divorce. This leads Larry to question God and his role in the universe.

He turns to his rabbi—three rabbis, in fact—to seek spiritual guidance. None offer much help. The first rabbi (Simon Helberg), who is just out of seminary, basically tells Larry that he’s too inexperienced to advise him. The second (George Wyner) tells him “the story of the goy’s teeth,” a longwinded, elaborate tale which basically concludes with this bit of wisdom: in time, these answerless questions won’t bother you as much. And the third rabbi (Alan Mandell), an ancient sage, will only speak indirectly, through Larry’s son, by quoting a popular song of the time:

When the truth is found to be lies
And all the joy within you dies
Don’t you want somebody to love?

It seems that the collective Jewish wisdom of the ages offers few answers. Yet it becomes clear by the end that Larry, like Job, is indeed being tested. And he’s on his own; no one can help him but himself.

It’s an excellent film. The acting was wonderful, especially by Stuhlbarg, who has made the wise choice to play Larry as someone who is more confused than angered by his fate.

And there were some very funny moments, such as when Larry has to describe what his daughter does all day, which is wash her hair: “apparently it’s a complicated multi-step process”; or when Sy Ableman (Fred Melamed) the man who is stealing Larry’s wife, sympathetically counsels Larry on how to deal with the grief that he himself is causing.

And I just loved the opening scene which sets the tone perfectly: the prologue tells an old Yiddish folk tale set in an Eastern European shtetl—an ambiguous story about a man who may or may not be a dybbuk (evil spirit). After their strange encounter, a man and woman are filled with doubt about everything except the one thing that is certain: misfortune has come upon them. And if Jews know about anything, they know about misfortune.

But it’s the theme of physical and spiritual agony that most gets to me, quite probably because I went through that myself so recently. I was particularly moved by a scene where Larry is meeting with his lawyer (Adam Arkin) to discuss his divorce. In the middle of the conversation, Larry just bursts into tears. I knew exactly what was going on inside him because I’ve been there too.

All of a sudden the weight of the unsolvable problems and the unanswerable question of “why?” comes crashing down. It’s the lowest moment of your life and you’re wondering if there’s any way it could possibly get better, or if it’s only going to get worse. And where is God? Is He pushing you down there? Or is He holding you back from going even further, keeping you from ending it all? Or is He completely indifferent to your suffering? Or maybe He doesn’t exist at all—maybe He’s just a myth. It may be the loneliest and scariest feeling in the world. The intense cries and tears seem to never end, and no words can comfort.

The fact that I’m here now, watching this movie and writing this review, is testament to my improvement and I do thank God for it. It took a little time, but I managed to pull myself up, with God’s help, and with the help of many others. Recovery is truly a blessing.

Unfortunately, I cannot reveal whether Larry Gopnik will have such a happy end, in this movie. Whether or not he passes his tests. And what God’s eventual answer is for him. “A Serious Man” is not exactly a modern retelling of the Book of Job, but it certainly deals with similar issues and offers a more contemporary perspective.

It can be argued that all of the Coen brothers’ films, from “Fargo” to “The Big Lebowski,” to “O Brother, Where Art Thou?” to “The Hudsucker Proxy,” reflect Jewish themes and sensibilities; yet “A Serious Man” is the most overt, so far. It’s filled with characters who are serious about their Jewish heritage and look for answers to their problems in the Jewish world.

Whether or not those answers are satisfactory, you’ll have to decide for yourself.