Laughing in the Darkness: His Life, Work, and Times 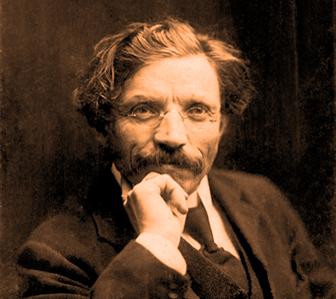 Two weeks ago, I’m sorry to report, the statue of Yiddish writer Sholem Aleichem, in Kiev, was vandalized with swastikas. Perhaps you heard about this vile act of anti-Semitism and were rightly enraged.

But maybe you might like to learn a little bit more about the beloved writer who created the character of Tevye the Dairyman and inspired the musical “Fiddler on the Roof.”

If so, I highly recommend checking out the excellent documentary “Sholem Aleichem: Laughing in the Darkness.

Directed by Joseph Dorman, this 2011 film not only chronicles the life of Solomon Rabinovich, who wrote under the pen name Sholem Aleichem (which literally means “peace be upon you” and was a standard greeting), but it examines some of his best stories as well as the turbulent times for Jews in Eastern Europe which influenced him.

Aleichem lived from 1859 to 1916, and witnessed the erosion of Jewish society in Eastern Europe through forces of intellectual ideas, political unrest, and violent anti-Semitism.

The historical and literary experts interviewed in the film show how these events shaped his world view and his stories. His life is traced from humble beginnings in a small shtetl in Russia, to Kiev where he was a respected man of letters, to America where he fled to escape from pogroms.

He wrote hundreds of short stories and several novels in Yiddish. His first successful book was The Adventures of Menachem-Mendl about an overly optimistic Jew who went to Odessa in an attempt to seek his fortune as a speculator, and his critical wife who tried to bring him back down to earth.

There were eight Tevye the Dairyman stories, the plots of which were not exactly as you might know them from “Fiddler on the Roof.” One of his last works was Mottel the Cantor’s Son about a boy who emigrates to America.

Many passages from these works are brought to life through the vocal talents of some great actors, including Peter Riegert, Alan Rosenberg, and Jason Kravits. The excitement in their voices draws you in.

One of the film’s highlights, at least for me, was when several of the literary scholars excitedly read passages in the original Yiddish and then translated, showing with pure joy the beauty of the Yiddish language as Aleichem articulates it. Then they offer profound insights on the deeper meaning of the stories. What does it mean to be a Jew? What is Jewish identity when Judaism is being profoundly altered?

Through the Yiddish language, Aleichem addresses these issues with humor. It was pointed out that humor sometimes masks the darkness; other times he simply shows that you can laugh at the horror. For this, Aleichem was referred to as “The Jewish Mark Twain.”

Another fascinating aspect to the documentary is that it contains a treasure-trove of archival footage and photographs showing life in Eastern Europe at the turn of the last century. So many people and faces and towns recall a way of life long gone, yet here it comes back to life again. I am amazed that the filmmaker was able to find such a wealth of filmed history.

The film ends with a posthumous look at Aleichem’s legacy. He was revered in the Soviet Union until Stalin decided to execute all Yiddish writers. In Israel, he was considered contrary to Zionism and relegated to childhood nostalgia. In America, he was romanticized, and his stories reinterpreted, through stage and film, for different times.

Hopefully, the film will inspire you to go read (or re-read) some of Aleichem’s stories. Though written for a different age, I believe there is much in them that is still relevant.
The recent vandalization of his statue in the Ukraine is a sad reminder that the anti-Semitism which he fled still exists and remains a major problem in the world.

But we must also remember, as he demonstrated, that laughing at the darkness is a way to deal with it.

“Laugh out of spite,” he said.

Sholem Aleichem! Peace be upon you!