"No Free Speech for Nazis" in This Legal Drama 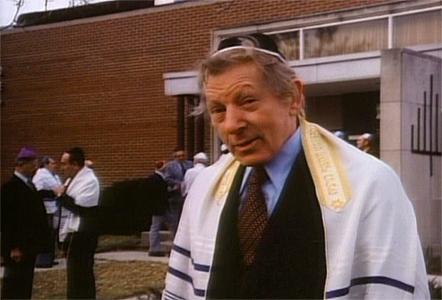 “Defending your enemy is the only way to protect a free society against its enemies.”

So says Aryeh Neier (Stephen D. Newman), the head of the ACLU, in the 1981 made-for-TV movie “Skokie.” If he had made such a statement today, he’d be accused of being part of the “Al-Qaeda Seven” (Liz Chaney’s term for Justice Department lawyers who defended the rights of suspected terrorists at Guantanamo.)

However, his remarks actually referred to a case from the 1970s in which the right of a Neo-Nazi group to hold a rally in a largely-Jewish town was on trial. “Skokie” may be three decades old, but the issues it addresses are as hot as any of the debates on Fox News or MSNBC.

In 1977, the town of Skokie, Illinois, a suburb of Chicago, had a population of 70,000 people; 30,000 were Jewish. When a Chicago-based Neo-Nazi group lead by Frank Collin (George Dzundza) announced plans to march in Skokie, all Hell broke lose.

I actually remember this incident, even though I was only ten, because the entire American-Jewish community strongly opposed this. My own father vowed that, if necessary, he would travel to Skokie with a gun and shoot any Nazi that attempted to march.

Opposition was quite understandable; it’s one thing for a small group of hoodlums to wave a few banners in a city park where every little political group makes some sort of silly declaration every day—this is the proud American tradition of free speech, no matter how ridiculous.

But it’s quite a different thing for Nazis to go into a quiet, suburban town and wave a swastika in the faces of Holocaust survivors, implying they would like to restart the “Final Solution.” And yet, the First Amendment of the US Constitution gives them that right to free speech.

So begins one of the great legal debates of the Twentieth Century and a discussion about the very basis of Democracy. The movie “Skokie” depicts the series of legal battles in a fair and moving way, showing the points of view of all the major characters, slightly fictionalized for dramatic import.

First and foremost is Max Feldman, powerfully portrayed by Danny Kaye in one of his final and unusually dramatic roles. Max is a Holocaust survivor who has settled in Skokie. Three-and-a-half decades earlier, he felt powerless to stop the Nazis who murdered his family; now he is determined to not let it happen again.

Although he is told by supposed experts, such as ADL head Abbot Rosen (Carl Reiner), that modern Neo-Nazis are not a threat, he recalls people making similar statements in his youth which proved to be wrong. Max makes some very powerful statements and arguments; it is easy to feel his justifiable fear.

But he has problems within his own family. His wife Bertha (Kim Hunter) who is also a Holocaust survivor has a very different reaction to the Nazis—she wants to blot it out and pretend it’s not happening.

And his teenage daughter Janet (Marin Kanter) doesn’t understand what’s going on so Max needs to explain it to her, though he wishes she didn’t have to grow up so soon. There is a very emotional scene where Max tells Janet the story of her grandmother and how she died.

In an effort to stop the Nazis from marching in Skokie, Max and the other local survivors of the Holocaust form a group led by Sol Goldstein (David Hurst). They are joined by the Jewish Defense League, militants who include Robin Bartlett. They shout “Never Again!” as if their lives were at stake.

The mayor of Skokie, Albert J. Smith (Ed Flanders), is determined to keep the peace by keeping the Nazis out. He enlists the aid of the city’s attorney, Bert Silverman (the great Eli Wallach), and the chief of police (Brian Dennehy). With the support of local clergymen and civic leaders, they draw up and pass a series of town ordinances designed to prevent public demonstrations.

However it’s a double-edged sword; such ordinances, in the hand of a Southern sheriff in the 1950s, would have kept Martin Luther King from marching for civil rights. Although some protest the comparison, claiming there is a moral difference, Silverman is forced to point out that there is no legal differences.

The Neo-Nazis’ free speech rights are defended by the American Civil Liberties Union. Their commitment to supporting the Constitution forces them to walk a thin line. This is particularly difficult for Collins’ lawyer, Herb Lewisohn (John Rubinstein), who is also Jewish.

As you might imagine, the Jewish membership of the ACLU is not at all happy about the ACLU’s defense of Neo-Nazis. No scene makes this more powerful than when one of their biggest supporters, played by the great Lee Strasberg, submits his resignation.

He has a great speech which concludes, “Above all, there is something monumentally inappropriate in a Jewish lawyer, financed by a membership that is significantly Jewish, to go into a court and defend the rights of a few hoodlums to go into a Jewish community and proclaim ‘It’s too bad Hitler didn’t finish the job.’”

If not handled well, a movie that deals with legal and constitutional issues like this has the potential to become a mediocre, little teleplay where stick-figure characters spout opposing points of view.

It might have ended up as one of those “ABC After School Specials” that were popular at the time. Instead, a well crafted screenplay by Ernest Kinoy, excellent direction by Herbert Wise, and powerful performances by a stellar cast help it to really shine and still speak to us across the decades.

Should we allow freedom for thought we hate? Should exceptions be made to the Constitution and if so, where do we draw that line? And if we do draw it somewhere, what’s to prevent someone else from drawing it somewhere else, where our own rights are threatened?

“Skokie” is, in so many ways, a Jewish movie. But it is also an American movie. It is no coincidence that the opening and closing shots are of an American flag. And an interesting scene in which “Hatikva” bleeds into “My Country Tis of Thee” reminds us that America is a land where we let freedom ring.

But can it truly be a land of freedom for all? This is a question that America faces—from Montgomery to Skokie to Guantanamo to Arizona. Let freedom ring!