Three Generations of Hungarian Jews Struggle with Their Society 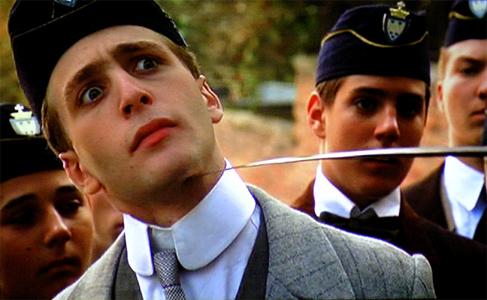 How far we’ve come only ten years into the 21st Century! Remember the dawn of the millennium and how everyone was hopeful that the world would improve and the new century would be one of love, tolerance, and peace? Ha, ha! Sure seems like a funny joke now, after acts of terrorism, two wars, several natural disasters, and a major economic one, all within ten short years. Could we have been so naïve?

But perhaps it’s worth trying to regain a little of that optimism and turning the clock back a decade. A good way to do that, I think, is looking at the film “Sunshine,” which was made in 1999, released in 2000, and portrayed many of the major tragedies of the 20th Century. Yet it started and ended on a note of hope.

An early ironic scene depicts the joyous optimism felt by the characters on New Years Eve 1899, as they believed the new century would make their lives better. Yet only a few years later a shot rang out in Sarajevo that would change the course of history and lead to countless troubles for the 20th Century.

The epic film chronicles three generations of the Sonnenschein family, Hungarian Jews who tried desperately to fit into their society, make it better, or at least not be destroyed by it. Despite their efforts, they were not very successful. They were swept up by the tides of history, as they struggled to define who they were.

Ralph Fiennes (the evil Commandant from “Schindler’s List” and Voldemort in the Harry Potter movies) stars in this family saga playing three roles: father, son, and grandson. Each character—Ignatz, his son Adam, and his son Ivan—deals with love and politics in his own way. Each unique, molded by his generation, and yet in many ways they share much in common. Like father, like son, like grandson. Can each escape the mistakes of his father?

The three-hour film is basically divided into three acts, of about an hour each. While each character has his own story, collectively they tell a larger story about love, family, assimilation, and political corruption.

The first episode tells the story of Ignatz Sonnenschein, his brother Gustave (James Frain), and their cousin / adopted-sister Valerie (Jennifer Ehle), three very close siblings who grow up in Budapest around the turn of the century. The wealthy family is in the business of producing a popular liquor they call “A Taste of Sunshine,” but none of the three children want to go into the family business. Gustave goes into medicine, Valerie becomes a photographer, and Ignatz goes into law.

The progressive reforms in the Austrian-Hungarian Empire of Franz Joseph allow Jews to move up in society and Ignatz soon becomes a judge. Grateful for his ability to rise so quickly in his career, he is loyal to the Emperor, but to a fault. He is willing to help protect corrupt officials because they are in the Emperor’s faction.

However to continue his rise and become a higher-ranking judge, Ignatz must change his last name from Sonnenschein because it is too Jewish-sounding. So he and his siblings change their name to Sors, which means the same thing, but in a different and more-socially acceptable language.

Gustave sees the horrible conditions poor people are forced to endure and is drawn to Communism as a remedy. The political quarrels he and Ignatz have are put to the ultimate test when Gustave’s name appears on a list of state enemies.

Ignatz’s story is also one of forbidden love. He and Valerie fall in lust and carry on a secret love affair. Although they are cousins, Valerie is also Ignatz’s adopted sister; so their father (David de Keyser) has forbidden them to marry.

The second act tells the story of Adam, the son of Ignatz and Valerie (now played by Rosmary Harris, the real life mother Jennifer Ehle, who looks very much like her—so much so that at first I thought the makeup on Ehle was the best aging makeup I had ever seen). As a teenager, Adam is bullied for being a Jew, and so in self-defense, takes up fencing. As it turns out, he has a real talent for it.

In order to fence at the highest level, the Officer’s Club, Adam cannot be Jewish, so he converts to Catholicism. He doesn’t take his new religion seriously; it’s just a hoop he must jump through on the road to becoming a great fencing champion. And he goes all the way … all the way to Berlin for the 1936 Olympics where he wins a gold medal and returns to Hungary as a national hero.

But like his father, Adam’s story also includes forbidden love. His bother’s wife, Greta (Rachel Weisz), lusts after him. Although Adam cannot help but find her attractive, he struggles not to betray his brother or his wife.

All of this carries on against the background of growing fascism. Adam is warned to leave, but he loves Hungary and believes that his status as a national hero and a converted Catholic will protect him and his family. When Hungary’s version of the Nuremburg Laws are passed, the family debates what to do. At first, Greta is the only one who really wants to leave, but by the time they realize what danger they are in, it may be too late.

The third act tells the story of Ivan, Adam’s son, a Holocaust survivor who, in the new Communist Hungary, joins the secret police in, what seems to him, an idealistic crusade to punish the murderers of the Jews. His immediate supervisor, Andor Knorr (William Hurt), is an Auschwitz survivor, and he becomes his best friend.

But under a Communist regime, ideals turn into corruption and Knorr is falsely accused of crimes against the state. Friendship is put to the ultimate test when Ivan is assigned to interrogate Knorr.

Overall, “Sunshine” is a bit long, but it really is great movie and has a wonderful ending. Each of the three stories is interesting in itself, yet together they make a larger saga that deals with major themes of hiding, assimilation, and the struggle for Jewish identity in the Diaspora. Over a century, we see political regimes come and go, ideals turning into corruption, hope turning to despair. And yet, in the end, as a new millennium approaches, there is hope renewed as the sunshine comes out.

Maybe we don’t need a big event like the change of a century to have hope for the future. Maybe any old New Years Eve is good enough. In fact, there’s one coming up in just a few days. Good enough for me.