Language Barriers Not a Serious Problem 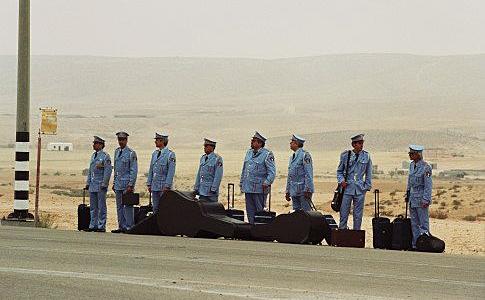 The Israeli comedy, “The Band’s Visit,” begins with this announcement: “Once—not long ago—a small Egyptian police band arrived in Israel. Not many remember this. It wasn’t that important.”

The story that unfolds over the next 90 minutes is about ordinary people spending an evening with other ordinary people; what could be less important? And yet, in a metaphorical sense, what these ordinary people do in one night, simply by being ordinary, considering the millennia of conflict between their respective cultures, really is quite important.

The 2007 movie tells the story of an eight-member Egyptian police ceremonial band which has been invited to perform at the opening of an Arab cultural center in an Israeli town. When they arrive at the airport, for some reason, no one comes to pick them up, so they must figure out how to get to the town on their own.

A relatively simple mistake puts them on a bus to Bet Hatikvah instead of Peta Tikvah. They find themselves in a small settlement in the Negev Desert where the band’s strict leader Tawfiq (Sasson Gabai) is at first mistaken for a general and is then informed by Dina (Ronit Elkabetz), the owner of a local eatery, that there is no Arab cultural center in that town. “No Arab culture. No Jewish culture. No culture at all.”

Once the mistake is realized, it’s too late to get to the correct town because the last bus of the day has left. Because the settlement is so small there are no hotels, Dina does the only thing a person with a good conscience can do—she offers to let three men sleep in the restaurant, two in her apartment, and requests her friend Itzik (Rubi Moskovitz) to take in three. Although Itzik protests because it is his wife’s birthday, Dina says, “All the more reason.”

And so begins a slow-moving but very wonderful and touching evening in which the Egyptians find themselves as guests in Israeli homes for one night. Politics and centuries of mistrust and cultural conflict are completely set aside as Israelis and Egyptians try to communicate with each other in basic, simple, human terms.

A quite and gentle humor pervades the film as they try to discuss in broken English—the second language that they mostly understand—the things they have in common such as food, music, family, love, companionship, loneliness. The dialogue is minimal and yet they are able to say so much and, mostly, understand one another.

As the evening progresses, Dina takes Tawfiq out to a little cafeteria where they get to know each other and share their feelings of isolation. It’s clear Dina is attracted to Tawfiq, but how far can such a relationship go?

The youngest band member, Haled (Saleh Bakri), meets up with Papi (Shlomi Avraham), an Israeli whom he met briefly before at the café. Papi’s on his way to a double-date and Haled convinces him to let him tag along.

Papi’s quite inexperienced with women but Haled, a ladies-man in both countries, is able to give him some advice. The funniest scene in the film involves Haled, Papi, and Papi’s date sitting on a bench. With absolutely no dialogue, Haled shows Papi exactly what to do.

“The Band’s Visit” illustrates that so much can be said even when you don’t speak another’s language. I think the scene which most clearly demonstrates this theme is the one where Papi asks Haled to tell him what it’s like to make love to a woman.

Haled replies that he can, but only in his own language because his English is not good enough. He then goes on, in Arabic, describing the sexual union of man and woman in a beautiful and poetic way. Thanks to subtitles, we know exactly what he says. But somehow Papi understands too. It’s a really nice moment.

The film is funny, tender, and touching. When political and cultural conflicts are put aside, real human connections are made and even language barriers are overcome. The filmmakers claimed that this “wasn’t that important.”

Really? Perhaps they were being ironic.