Paving the Way for “Son of Saul” 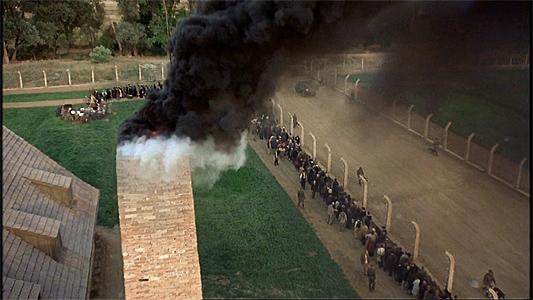 Perhaps you have heard some of the buzz around the recent Hungarian film “Son of Saul” which is making the rounds at festivals and has made the short list of nominees for the Best Foreign Film Oscar.

I had a chance to see this powerful film last month and I can tell you that this artistic triumph, which focuses on a fictional member of the Auschwitz Sonderkommando, certainly deserves all the praise it is getting—not only for its disturbing subject matter but for its very unique style of storytelling.

However, I would argue that this incredibly worthy film could never have been made if Tim Blake Nelson hadn’t first made “The Grey Zone” fifteen years ago, in 2001.

While “Son of Saul” is told only from the point of view of Saul and mostly in close-ups of his face, “The Grey Zone” gives a much better picture of the Twelfth (out of thirteen) Sonderkommando which rebelled against the Nazis and managed to blow up two of the crematoriums.

In the recent film, Saul is on the outskirts of the rebellion—he’s willing to go along with it, but is not one of the ringleaders or organizers. Just before the outbreak of the rebellion, another issue suddenly presents itself and Saul finds himself pulled in two different directions. It makes for very interesting inner as well as outer conflict, but it can also be somewhat confusing if the viewer doesn’t understand the nature of the Auschwitz Twelfth Sonderkommando Rebellion.

The earlier film, however, is less fictional and tells its story in a more straightforward manner. (I’d call it fictionalized history as opposed to historical fiction.) “The Grey Zone” shows the horrible work of the Sonderkommando and how the rebellion grew and was carried out. It’s difficult to talk about—and to watch for that matter—but it is an extremely important facet of the Holocaust to know about.

The Sonderkommando were the Jewish prisoners responsible for herding other prisoners into the gas chambers, lying to them about being reunited with their families after the “showers,” shoving the dead bodies into the ovens, and cleaning up the grisly facilities. In exchange for this, they were given special camp privileges, better food, and several extra months of life before they, too, were exterminated.

Several scenes in the two movies are similar and there are even a few lines of dialogue that are identical. However, they do diverge on several key points, one of which is the gender of a victim who, unprecedentedly, actually survived the 20 minutes of gas.

While I think it is fair to say that “Son of Saul” is the superior of these two films, I would strongly recommend audiences first see “The Grey Zone,” currently available on DVD, as a preparation for “Son of Saul,” which will probably be widely distributed later this year. Not only because the first will better explain the second, but because the first film paved the way for the second.

“The Grey Zone,” which was based on Nelson’s stage play, is still incredibly powerful on its own and has great performances by the entire cast. David Chandler, Steve Buscemi, Mira Sorvino, Natasha Lyonne, and David Arquette are very moving as prisoners, and Harvey Keitel is shocking, portraying the banality of evil in an alcoholic Nazi office.

But by far, the most outstanding performance goes to Allan Corduner as Miklos Nyiszli, a Jewish doctor who was forced to cooperate with Josef Mengele. Nyiszli is a non-fictional character who managed to survive and bore witness to the Auschwitz atrocities as well as the rebellion. Corduner portrays Nyiszli as a complex, timid soul who somehow finds the inner strength to help others and to endure.

If the title not only refers to the area where the grey ashes of the dead cover the Sonderkommando but also to the morally questionable zone where people chose to do horrible things to survive, then it is Corduner’s character to whom this title most implies.

This is all very disturbing, yet, nonetheless, part of our history and, unfortunate as it might be, part of our human nature. We all want to say, “Not me. I would never do that.” But none of us can know for sure unless we are placed in those extreme circumstances.

Let’s certainly hope it’s something we never have to find out, but for the characters in these two movies, and for many people who lived at that time, the answers to the base of humanity were quite unsettling.