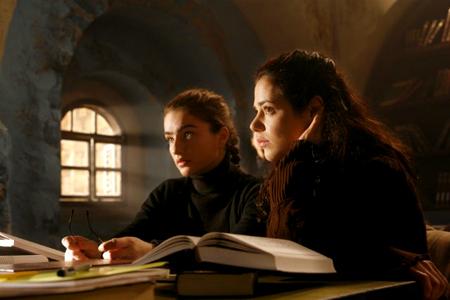 Eighteen years ago, a dear family friend named Evelyn lay dying of cancer. When mainstream medicine could not cure her, she turned to ultra-orthodox rabbis and Jewish mysticism.

I recall visiting her in the hospital, on her deathbed; she clutched an amulet and recited various prayers and incantations in between doses of assorted herbs, vitamins, drugs.

My heart broke as it became clear that neither western medicine nor the collected wisdom of our Jewish heritage could save her from an untimely end.

It’s a bitter memory and I try not to think of it too often; however I couldn’t help being reminded of it the other evening as I watched the 2008 Israeli movie “The Secrets” (“Ha Sodot”) which portrayed a French woman named Anouk (Fanny Ardant) who is dying of cancer and comes to the ancient town of Safed (AKA Tzfat), the birthplace of Kabbalah, hoping to find some healing in the secrets of Jewish mysticism. No matter how I tried to repress it, I couldn’t stop thinking of Evelyn.

Now there are many differences between my dear friend and the fictional character of Anouk. Evelyn led a very pious life and did her best to be a devoted Jew and raise a good religious family; Anouk was a Christian who led a wild life in her youth (she fell for an artist, abandoned her family, reveled in sexual ecstasy, had a passionate fight with her lover which caused his death, served 15 years in prison for his murder, and emerged a broken woman).

But in the end, Evelyn and Anouk were much alike. Fated to go before their time, they turned to Kabbalah for answers, for healing of both body and spirit. The plight of both women and those who tried to help them moves me deeply, as fiction reflects reality.

As much as I’ve just written about Anouk, you might be surprised to learn she is not the main character in “The Secrets.” Actually, the protagonist is Naomi (Ania Bukstein). She is the daughter of a great ultra-orthodox rabbi (Seffy Rivlin) who heads a yeshiva in Bnei Brak, near Tel Aviv. Naomi wants to be just like her father and hopes one day to be the first female Orthodox rabbi, despite the fact that most of the men in her life, especially her fiancée (Guri Alfi), ridicule the idea.

After her mother dies, Naomi persuades her father to let her go study in an all-women’s seminary in Safed. The men who control the rabbinate only hesitatingly allow the experiment of women studying Talmud; if things go too “wrong,” from the men’s point of view, they’ll shut it down. The headmistress who runs the seminary (Tiki Dayan) calls it “the silent revolution” and bemoans the fact that religious feminists must be far more slow and cautious than their secular counterparts.

At the school, Naomi meets Michel (Michal Shtamler); at first, the two do not hit it off at all. Naomi is very serious about her studies and Michel has come to the seminary only begrudgingly, to please her father. As part of the school’s charitable programs, the two are assigned to bring food to Anouk who lives nearby; that is when everything changes. When they learn of her past and present troubles, Michel’s heart goes out to her. She then persuades Naomi to try to help her.

Although considered too young, and of the wrong gender, to study Kabbalah, Naomi clandestinely searches through old books in the library to uncover the secrets of Kabbalah and find healing rituals that can help Anouk. (Harry Potter fans might find this an interesting parallel to all the times Hermione Granger sneaks into the restricted section of the Hogwarts library to research secret spells or information about dark magic.)

Naomi does in fact come up with several “Tikkuns,” or healing rituals, for Anouk. They involve burning paintings in the forest, tormenting the body, reciting a list of regrets in a holy cave, and going to a mikvah (ritual bath). The mikvah scene, by the way, is filmed just beautifully; there’s a strange power in it that can really move you. Anouk says she can’t explain it—neither can I.

As Naomi and Michel go through these various Tikkuns to help Anouk, their friendship deepens. Perhaps, as some in the ultra-orthodox community would think, it goes a bit too far, as they ultimately discover a sexual attraction toward each other. This threatens to not only ruin the relationship between Naomi and her fiancée and Michel and a sweet clarinet player (Adir Miller) she is seeing, but the stability of the entire social fabric the ultra-orthodox community has been following for centuries. Ironically, their love turns the friends against each other.

In the end, though, it all comes back to Anouk. Regardless of the complexities of Naomi and Michel’s relationship, they put aside their differences to help Anouk finish her Tikkun rituals as she faces her ultimate fate. Yet if it became known that the girls were dabbling in Kabbalah, the school could be shut down and the religious feminist revolution hampered.

Director Avi Nesher really knows how to draw powerful performances from his actors; there were several scenes that literally moved me to tears. No doubt, part of it was being reminded of Evelyn, but a large part was the marvelous acting as well as the heartbreaking situation these characters find themselves in and the compromises they must make—or refuse to make—to realize their dreams and be who they are.

The conclusion of the movie demonstrates that although traditional Judaism may present a strong social and spiritual foundation, the rigidity of the ultra-orthodox community seems ill-equipped to deal with some basic human longings. If the answers to life and death are revealed in the secrets of Kabbalah, what does it profit the rabbinate to keep them hidden?

Perhaps a woman, dying of cancer, holds the key.