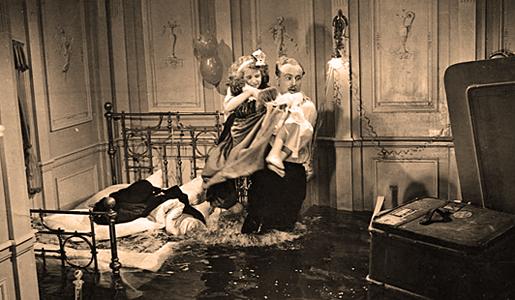 This upcoming April 14 will be the 106th anniversary of the sinking of the Titanic.

Titanic enthusiasts, or “rivet counters” as they are sometimes called, have probably seen every movie about the sinking of the Titanic. But have they missed one?

Perhaps the most bizarre and least known of the Titanic films is the 1943 German film “Titanic”, made by the Nazis as propaganda to advance their theories of German superiority.

An analysis of the movie is an interesting study of the Nazi mind and how it wanted to influence others, but the behind-the-scenes story of the making of the film, as the Nazis were fighting a losing war on two fronts, is even more fascinating.

A little background. In the 1920s during the Weimar Republic, German cinema revolutionized the industry with films like “Metropolis” and “The Cabinet of Dr. Caligari.”

But when the Nazis took power in the early 1930s, the politics of anti-Semitism drove their best filmmakers, many of whom were Jewish, out of the country and into Hollywood.
Joseph Goebbels, the Nazi Minister for Public Enlightenment and Propaganda, understood the power of film and wanted to build a Nazi cinema that would rival Hollywood.

Leni Riefenstahl’s “The Triumph of the Will” was only the tip of the iceberg (excuse the Titanic-related metaphor). Goebbels was jealous of “Gone with the Wind” and wanted to produce an epic that would outdo it as well as glorify the Nazi cause.

In 1940, at the same time Hitler was invading France and looking to invade Great Britain, an idea was hatched to produce a film about the greatest British maritime disaster.

Well, first remember that the Titanic was originally built as part of the pre-World War I shipping rivalry between Germany and Britain. Goebbels figured that showing a defeat for the British would inspire a German public to back their invasion of Britain.

Furthermore, the film would play lose with the facts, twist history, and add fictional elements. The British aristocracy are portrayed as greedy, stupid, selfish, indulgent, and cowardly.

The villain of the film is Bruce Ismay (Ernst Fritz Fürbringer), the President of the White Star Line. And while many historians have given the real Ismay some culpability for the disaster, the Nazi version portrays him way over the top. In the film he is seen trying to manipulate stock prices of his own company for insider trading, even going so far as bribing crew members to ignore safety regulations. Most of the other wealthy British characters are almost as unsympathetic.

The film’s hero is a fictional character, First Officer Petersen (Hans Nielsen). He’s German. He spends the first half of the film trying to get the ship to slow down and warns about the dangers of icebergs—none of the British officers take him seriously.

The movie is filled with so many historical inaccuracies that it would take several pages to list the worst offenders. It comes as a pleasant surprise when the film actually gets a detail correct.

The final third of the film, believe it or not, is actually touching in a number of ways. There are some tender moments as the ship goes down, such as when a poor couple hold hands, the wireless operator sets his pet bird free, or when Petersen carries a little girl to safety. You can really feel for some of these characters despite the fact that you know they are being played by Nazi actors in a propaganda film.

Goebbels hired director Herbert Selpin to film the movie and gave him an unprecedented budget. The equivalent of 180 million dollars. He also gave him soldiers to play extras and a huge ship, the Cap Arcona, to double for the Titanic. This drained the resources of the Third Reich at the height of the war, but Goebbels was obsessed with this picture.

Selpin was a member of the Nazi party, but like most in the German film industry at that time, his heart wasn’t in it. Most of the filmmakers and crew were apolitical; they joined the party because that was the only way they could make movies.

As many things went wrong on set, production slowed down, and actors forgot their lines, Selpin became more and more frustrated. One evening he exploded. He criticized his friend, screenwriter Walter Zerlett-Olfenius, who was one of the more dedicated and patriotic Nazis. In the midst of his outburst, he shouted, “Fuck the army and fuck the Iron Cross!” (The Iron Cross was Germany’s highest honor.)

It may be hard for Americans to appreciate the gravity of this, as we take freedom of speech for granted, but in Nazi Germany such an insult literally carried the death penalty. Zerlett-Olfenius reported his “friend” and Selpin was questioned by the Gestapo. This inquisition went on for several weeks as Selpin went back and forth between interrogations and shooting some of the most difficult scenes of the film, which included deaths and drowning. Selpin probably felt himself drowning.

Finally Selpin was confronted directly by Goebbels. He could not deny that he had said the traitorous remark. He was arrested and put in a cell. The next morning, he was found hung in the cell. Was it suicide or murder? To this day, that is uncertain.

Goebbels hired another director to finish the last few scenes. When he was finally presented with the final cut of the film in December 1942, Nazi Germany was in a very different place than it was two-and-a-half years earlier when the project was greenlighted.

Goebbels realized he had made a colossal mistake. The film's final scenes portraying chaos and death would terrorize, not inspire, a German public that was now hiding from Allied bombing raids and had lost friends and relatives on sunken ships.

Also, the vices of greed and stupidity, originally meant to criticize the British, could now be applied to Nazi leaders as the Third Reich was collapsing. Furthermore, Goebbels realized that the fictional villain Ismay bore a strong resemblance to Hitler. So Goebbels banned the film.

Unfortunately, that’s not the end of the story. There is a tragic postscript. In early May 1945, prisoners from Auschwitz and other camps, were put aboard the ship Cap Arcona, which had stood in for the Titanic in the film.

The Cap Arcona was rigged with bombs and gas and deliberately sailed into an allied bombing raid. It was struck, exploded, burned, and sunk. Any prisoners who tried to jump off the ship were shot by the SS. Almost 5000 Jewish prisoners were killed on the ship—more than three times the number of people who died on the real Titanic. A few days after that atrocity, Germany surrendered.

The Nazi “Titanic” movie was but one of many the Nazis shot during their twelve year “thousand-year Reich.” Believe it or not, those movies have been recently discovered and a new documentary, “Hitler’s Hollywood,” which will be released soon, explores all those films. No doubt it will help put the Nazi “Titanic” in a more complete context.

To my fellow Titanic enthusiasts out there, I recommend, hesitatingly, that you see this film. Not to enjoy it, or for any historical insight into the real Titanic, but to see how far Titanic lore can stray for nefarious purposes.

And it is kind of haunting to realize, as you watch those final scenes of death, that the man who shot them was himself dead a few days later.

To stream a documentary on the making of the Nazi Titanic, for $3, click here and then scroll down to episode number 148.

To read an article about the upcoming film, “Hitler’s Hollywood,” click here.