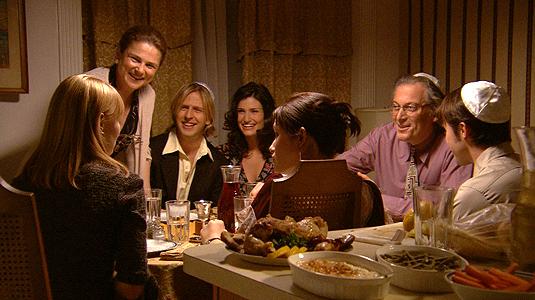 In the delightful coming-of-age comedy “The Tollbooth,” there is a rather poignant scene. Sarabeth Cohen (Marla Sokoloff), the main character, is driving home with her gentile boyfriend Simon (Rob McElhenney) from a Fourth-of-July Barbeque where her boyfriend’s brother had made an anti-Semitic remark. Sarabeth is going on about how much she was offended and her ancestors insulted and so on. Although Simon clearly disagrees with his brother he cannot stand Sarabeth’s complaints, so to shut her up he shouts, “Your family is way more prejudiced than mine.” The remark stings.

It’s partly true, at least for Sarabeth’s parents (Tovah Feldshuh and Ronald Guttman), who are indeed hindered by their preconceptions of the non-Jewish world. Simon’s remark is meant to give us a sense of how he feels every time he goes over to visit Sarabeth’s family, and her parents constantly refer to him as “Christianson” and remind Sarabeth that he’s not marriageable material merely because of his religion. Considering that this movie is a comedy, it’s a rather disturbing issue.

The parents also have prejudice against homosexuals. This becomes particularly painful when Sarabeth’s older sister Becky (Liz Stauber) announces she’s a lesbian. The mother is at such a loss to deal with it that, at first, she thinks it’s because Becky has been studying too hard in med school. “It’s okay to get a B once in a while,” she says, assuming that Becky will change her sexual orientation if she reduces stress.

As you can see, Sarabeth comes from quite the meshugenah family. She has another sister, Raquel (Idina Menzel), who is trying to lead a more conventional lifestyle; she is married and becomes pregnant. Sarabeth worries for her sister; she sees her becoming trapped by traditional feminine roles. Sarabeth rebels against this by expressing feminist ideas in her art and by rejecting all organized religion.

Holiday celebrations at home—Passover, Rosh Hashanah, Hanukkah—become increasingly difficult. At one point, after a dinner table fight, Sarabeth and Becky storm out. The father shouts after them, “Go! Get out of here! Do you think I want to see any of you? Get out!” But after a brief pause he adds, “Drive carefully.” Yep; typical Jewish family. At least, in some ways, very much like mine.

I guess that’s why I like this movie so much. It reflects much of my personal experience—especially when I was Sarabeth’s age, in my early 20s. But the film twists it with a stinging humor that can make you laugh at yourself and the quirks of your culture.

Another thing I love about this movie is how Sarabeth confronts religion. She’s tired of the family stories about ancestors surviving a pogrom or not surviving Auschwitz, and she’s especially fed up with her mother’s obsession with kashrut. But along the way, thanks to her sister Becky’s new synagogue, she discovers a much more progressive side to Judaism that, as an artist, she just might be able to embrace.

“The Tollbooth” is a comedy, so you know it will have a happy ending. Maybe Sarabeth will not be able to become a successful artist after only a year beyond college graduation, and maybe she won’t be able to work out the issues with her non-Jewish boyfriend. But she’ll certainly mature along the way.

In my opinion, writer/director Debra Kirschner tells a wonderful little story about a young woman struggling to deal with life, family, art, and love. She has to pay her tolls, but will she succeed in spite of her Jewish background, or because of it?

This independent movie had a very limited theatrical run in 2006, but it’s now out on DVD; it deserves a much larger audience so I hope it will now be seen by many more people. Go check it out. It’s worth it to pay the toll.