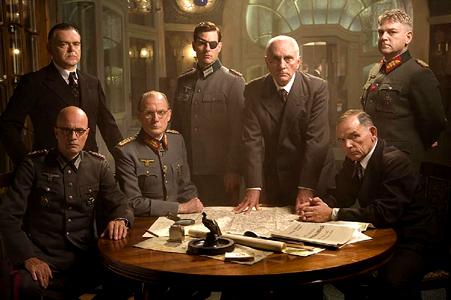 So, according to the new Tom Cruise movie, some Nazis were actually heroes. Yep, turns out to be true. In the summer of 1944, a group of high-ranking Nazi officers concluded that Hitler was taking Germany down a self-destructive path. His obsession with taking over the world and destroying the Jewish race would be the death of Germany, and he would have to be stopped.

Tom Cruise plays Colonel Claus von Stauffenberg who finds himself at the head of a conspiracy of several dozen officers who hatch an elaborate scheme. They plan to assassinate Hitler, and his second-in-command, Himmler, by placing a bomb in Hitler’s bunker during a military briefing. They will then start a false rumor that the SS is attempting to start a coup which will automatically launch Operation Valkyrie, a military mobilization which they can take advantage of to seize control of the government. Once they do, they plan to call for a truce with the Allies and shut down the concentration camps.

If their plan succeeds, they will stop the war and change history, finally ending the nightmare which Hitler unleashed upon the world. If their plan fails, they will all be executed for being traitors, and the attempted assassination will become nothing more than a little footnote to the larger history of World War II. I’m not going to reveal how it ends.

I have nothing bad to say about the film. But on the other hand, I don’t have any particular praise to shower on the film, either. Sure, it works well. It’s exciting, suspenseful, and well-paced, just as it should be. And the acting is fine. Cruise does a pretty good job, considering he’s Cruise. And the supporting cast, including Kenneth Branagh, Bill Nighy, Tom Wilkinson, Terence Stamp, and Eddie Izzard, all turn in worthy performances. But there’s nothing particularly special about the film. It’s basically a straight-forward docudrama. It’s not introduced by a future narrator, looking back, which could give it a contemporary perspective. There’s no wild and fancy editing. No surreal but symbolic dream sequence. No memorable meaningful scene. No unusual camera angles.

Not that there’s anything wrong with that. It’s just that the movie as a whole doesn’t really do anything to stand out prominently against the fine pack of Oscar-worthy films currently populating our multiplexes and art-houses this time of the year. (Perhaps if “Valkyrie” had been released during the summer, it might have shone out a bit more, but who am I to question the age old wisdom of Hollywood’s top distributors?)

But maybe some significance can be found if we ask the question, why is this story being told now? Longtime Chizfilm readers just might remember that a little over two years ago, when I reviewed Clint Eastwood’s “Flag of Our Fathers,” I asked the rhetorical question of why we keep making movies about World War II; I came up with the possible answer that “we keep finding new angles that speak to a new generation.” Well, if that’s so, than what does “Valkyire” have to say to us now, 65 years after it happened?

Are the filmmakers trying to tell us something about how to respond to political leadership? That we shouldn’t necessarily blindly follow our commander-in-chief, whatever his orders? That it’s heroic to question authority? That if a leader is attempting to take his country down a self-destructive path by obsessing over invading foreign countries and denying freedom to his own citizens he should be taken out, violently if necessary? Hmmm… I’m not sure I like where this is leading and I don’t think I want to go there. I do not wish to make false assumptions about how the filmmakers feel about their own political leaders. Parallelism should not necessarily be implied.

Perhaps the film is nothing more than just a simple story about something that once happened in history. It was an exciting moment and makes for great entertainment. Nothing else should be implied.

Maybe if there is a real lesson here, it’s that even in the midst of evil, there are good people who are willing to stand up against it. Whether they succeed or fail is not the point. The point is that they try. I guess that’s a good universal message we can all accept.