Fails to Deliver that Powerful Punch 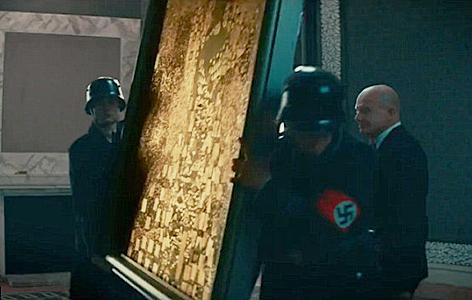 The excellent 2006 documentary, “The Rape of Europa,” brought much greater attention to one of the more unusual Nazi atrocities—the plunder of Jewish-owned art—and the subsequent difficulties of returning that art to their rightful owners in the post-war period.

This film spawned others, such as “The Monuments Men,” a feature film about the Allied officers who tried to track down and rescue the art, and “Portrait of Wally,” a documentary with a narrow focus on one specific case of art restitution.

And now this year, Helen Mirren stars in a feature film, “Woman in Gold,” about one of the first successful cases of art restitution in the late 1990s in which Maria Altmann sued the government of Austria for the return of her family’s “Portrait of Adel Bloch-Bauer” by Gustav Klimt.

The stolen painting had somehow ended up in the famous Austrian State Gallery, been renamed “Woman in Gold,” and become the darling of the art world, nicknamed “The Mona Lisa of Austria.”

The film focuses on the relationship between Maria (Mirren) and her lawyer, Randy Schoenberg (Ryan Reynolds). At first, they rub each other the wrong way, but they quickly get over it and become fast allies in the legal fight to restore the famous Klimt painting to its rightful owner.

The plot, despite being based on reality, follows the standard Hollywood formula. As the two main characters travel back and forth between Austria and the US, from court room to mediation room to the Supreme Court, they help each other, they argue and have a falling out, they get back together, they teach each other lessons, and they prove that ultimately good triumphs over evil, even if it takes a lifetime. There are no real surprises here. As legal dramas go, it’s rather mediocre.

Still, an interesting element is added by a sympathetic and helpful journalist played by Daniel Brühl. He represents the younger generation of Austrians who is rebelling against their parents’ generation (the children of the Nazi generation) who wanted to pretend that their parents did nothing wrong and ultimately elected former-Nazi Kurt Waldheim President of Austria in the 1980s. Brühl, as a grandchild of Nazis, wants to shine a light on the World War II atrocities and make up for them.

The most moving scenes, however, are the flashbacks to Maria as a child and young adult back in Vienna during the 1920s and 1930s. These scenes are well directed—there is a real sense of a wealthy and somewhat important family feeling unable to control the international events swelling around them, as the Holocaust approaches.

As Holocaust films go, “Woman in Gold” is pretty mild. The worst things we see are a group of Jews made to scrub the street as anti-Semitic crowds laugh at them, and several Hassidic Jews having their payus cut by Nazis.

Granted, these are disturbing scenes, but we’ve seen them before in other films which have also shown much worse. There’s not a single image of a person being killed. There is a mildly-exciting escape sequence of Maria and her husband running from Nazis and trying to get on one of the last planes leaving Vienna. But much of the suspense is lost because we know Maria will get to the US. The only thing we don’t know is if her husband will also make it.

So the film, overall, is disappointing. Of course, Helen Mirren can act, and if you are a fan of hers, don’t let that stop you from watching another great performance. But even her gravitas cannot pull this film much above the level of average.

Although “The Rape of Europa” documentary is extremely interesting and compelling, “Woman in Gold,” which deals with pretty much the same issues, comes across as typical Hollywood mediocrity.

It’s not a bad film, but I just wish, because of the importance of the topic, that it could have been a better one. Great art can be emotionally overpowering; one would hope that a film about great art would have at least a fraction of that powerful punch.