Coming of Age for Women in the Army 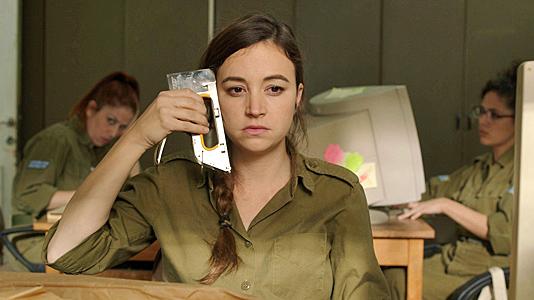 Israel is somewhat unique in the world in that it is one of only eight nations which require compulsory military service for women. So it is one of very few settings where you could have a coming-of-age-for-women-in-the-army film. Since they are draftees and not volunteers, Israeli women (at least those in this film) are kept far from combat; they are given jobs such as filing forms, shredding paper, and making coffee. They act out almost as if the army is an extension of high school.

“Zero Motivation,” the debut feature of promising director Talya Lavie, was inspired by her own experiences in Israel’s army. And it is certainly different from any other military film you may have seen. The characters are concerned with personal issues, some of which are very trivial such as breaking a Minesweeper record. Two or three times there are vague references to a war going on and soldiers dying; that doesn’t seem to refer to a specific war but rather the general fact that Israel is always at war (just as the US was always at war with the Soviet Union between 1945 and 1991). But whatever war it refers to, it’s far away in both geography and consciousness.

Some of the issues do rise to a more serious level. One character is so heartbroken she commits suicide. Another character is date raped. But most of the issues revolve around the complexity of friendships, figuring out how to avoid routine tasks, finding a sexual hookup, or trying to get transferred from the remote base in the desert to a more exciting base in Tel Aviv. Although set in the Israeli Defense Forces, it seems the plot could easily be transferred to a small local office of a major corporation.

If my poor description makes the film sound boring, I assure you it is not. Excellent acting and directing draw you in to these characters. Despite being in the military, they are young, immature, and have much to learn about the world. They are trying to figure out who they are (some more so than others). Every one of us was that way once.

The two main characters, Zohar and Daffi (Dana Ivgy and Nelly Tagar), are sort of the Lucy and Ethel of low-level administrators. They have been the best of friends forever, but when Daffi wants to get transferred, Zohar takes it personally. Their friendship is seriously tested in the first act. And a strange twist of fate further tests it in the third.

A number of other characters, who work in the administrative office with Zohar and Daffi, populate the film. There is the recent Russian immigrant Irena (Tamara Klingon) who might be possessed by a ghost. And the new woman Tehila (Yonit Tobi), whom Daffi assumes is her replacement, is not what she appears to be.

But as the film goes on and we realize her motivation is to move up in the ranks and make a good military career for herself, we realize that she means well but just has poor leadership skills. By the time she comes to the point where she weighs leaving the army and returning to civilian life, she’s quite sympathetic to the audience.

For a film where very little happens, especially compared to most military films, I cannot praise it more highly. Strong women who are bored by mundane situations.

This, too, is Israel.