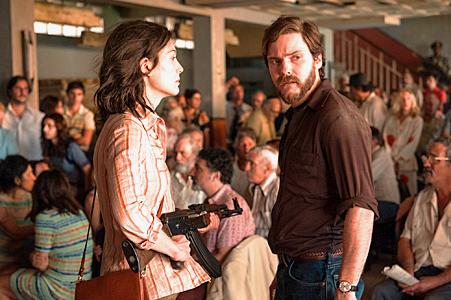 Philip Graham said that journalism is the first rough draft of history.

Films like “7 Days in Entebbe,” which opened in theaters this week and depicts events that happened over 40 years ago, help show the logical conclusion of Graham’s proclamation: those indirectly effected by events generations later can have quite the different view than those who lived through them and were directly affected by them.

Lincoln, for example, was quite unpopular in his own time but now is universally revered. Partly this is because of the knowledge of what comes later and partly because of the change in the way society thinks.

In recent decades, historical figures such as Billy the Kid and Mata Hari have been reevaluated by academics and are no longer seen as the bad guys they once were believed to be. Instead they were misunderstood or misrepresented by close-minded authority figures who painted them in negative light to protect their own interests.

Is this now to be the case of German terrorist Wilfried Böse? He was one of the seven self-proclaimed revolutionaries who, as a member of the Popular Front for the Liberation of Palestine, hijacked an Air France jet with many Israeli passengers back in 1976.

Everyone knows the saying that “one man’s ‘terrorist’ is another man’s ‘freedom-fighter.’” But maybe this is going too far.

Eight years ago, as long-time ChizFilm readers will recall, I reviewed the 1977 film Operation Thunderbolt, which depicted the famous raid less than one year after it happened. At that time, I remarked that the film didn’t hold up all that well, from the point of view of history, because we know of what came after in the decades that followed.

Yet at least it can tell us what the people who lived through it felt immediately afterwards: happy, proud Zionists celebrating their nation’s military skill.

The new film, which makes the interesting choice to focus on Böse who is played sympathetically by the talented German actor Daniel Brühl (“The Zookeeper’s Wife” and “Inglourius Basterds”), takes a very different point of view. “7 Days in Entebbe” shows all the same events as “Operation Thunderbolt,” yet it feels like a completely different film.

Instead of jingoistic, glorious action, it’s more of a tense drama about an idealistic man whose uncompromising beliefs about right and wrong bring him to a point where he is drawn into violence and ultimately finds himself conflicted.

This might be great art, but it might also be disturbing and problematic politics. Yet this is the world of today. 2018 is a far different world than 1976. Especially in the field of international terrorism.

The post 9/11 era of mass suicide bombings makes the '70s hijacking and taking of hostages look rather quaint. Also, world opinion now tends to side more with Palestinians than with Israelis—and even many of those who side with Israel at least acknowledge some legitimacy of the Palestinian argument.

When we look back at Böse, who was probably more motivated by ideology than hate, and never did kill anyone, we see he was no Osama bin Laden. So it only makes sense to view him in a more sympathetic light today than in the 1970s.

That’s why there are scenes where he calmly talks one-on-one with some of the hostages, insists he’s not a Nazi, and starts to question his revolutionary ideology when confronted with the fact that he might actually have to kill someone. Brühl’s portrayal of a man morally conflicted is radically different from Klaus Kinski (another very talented actor) who portrayed Böse as the embodiment of evil in "Operation Thunderbolt."

Current events, such as President Trump’s brazen decision to move the US embassy from Tel Aviv to Jerusalem in defiance of Palestinian wishes, hindering the peace process, may have been too recent to affect the writing and production of the film. Nonetheless they underscore the film in the mind of the audience, just as much as Yitzhak Rabin’s 1995 assassination.

Because of the important events surrounding Rabin’s term as Prime Minister in the 1990s, we almost forget he served a term in the mid-70s and was the Prime Minister at the time of the Entebbe raid.

Because he ultimately signed the Oslo peace accords, he’s portrayed as dovish in the film by the great Israeli actor Lior Ashkenazi (“Footnote”), but I think he was a bit more hawkish in 1976 than the film implies. His quarrels with Defense Minister Shimon Peres (Eddie Marsan, “Sixty Six”) seem based more in recent politics than those of the 1970s.

That’s artistic license. Which is a polite way of saying the film has more art and politics than “truth.”

All these problematic issues with the film are given an out at the very beginning. A notice before the title announces, “Inspired by true events.” That’s a disclaimer to relieve the movie of all blame when it is accused of being historically inaccurate.

We never claimed to be an accurate documentary, the producers can maintain; this is a fictional story. By declaring a film is “inspired by true events,” you don’t have to be loyal to the truth; you can make up any detail and pursue any theme you want. “Inspired by true events” simply means “not true.”

But there is certainly enough truth in “7 Days in Entebbe.” What is not objective truth is interpretation, speculation, political opinion, and dramatic license. I think, for the most part, it works.

Yet I still must question what is the overall point of the film? Why was it made today? Does it add anything new to the dialogue on terrorism?

Well, at least by reevaluating the role of a man who was earlier dismissed as “evil,” it reminds us that even the most despised of humans are still humans.

Our enemies have points-of-view and reasons beyond simply “being evil.” At the very least, we should be talking to them.