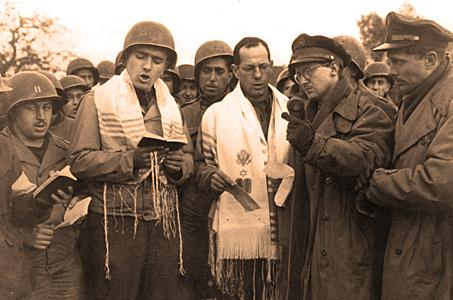 With Memorial Day coming up, my thoughts turn to family members who served in World War II. My great uncle Irving fought in North Africa, Sicily, and Italy. And my cousin Sol fought in France and Belgium.

I never met Irving, who died before I was born, but I heard stories about his war experiences and came across some of his war-time correspondence in my Grandmother’s papers after she passed. I was particularly moved by a poem Irving had written describing Italy as a place of both beauty and horror.

Sol I was fortunate enough to know. One day, when I was in my late teens, he told the story of how, during the first day of the Battle of the Bulge every officer above him was killed so on the morning of the second day, he was the first to lead the charge out of the trench. He lasted about a minute before a bullet took him down. He woke up three weeks later in a hospital in England. About a year after he told me that story, he passed.

I am thinking of these family members this evening because I have just seen the touching documentary “GI Jews: Jewish Americans in World War II,” which explores this historical moment in the Jewish-American community. This moving film tells the story of the half-million American Jews, men and women, who served in the US armed forces during the Second World War. Irving and Sol among them.

Directed by Lisa Ades, this documentary illuminates the role our Jewish-American relatives played by interviewing many remaining veterans, including Carl Reiner and Henry Kissinger. As Jews, they not only fought Nazis, but also anti-Semites within their own ranks. Many felt they had to prove their bravery as Jews; for others, the fight was even more personal because, as refugees from Europe, they were fighting to liberate their own families from Hitler’s grasp.

The film is full of poignant moments such as when we meet the bomber who had to fly a mission on Yom Kippur and then wept, or the trapped paratrooper who thought he was going to die and said Kaddish for himself.

It’s moving to hear the story of the chaplain who was given saved Torahs by liberated French townsfolk. Or the Nazis who surrendered to an American soldier not realizing he was Jewish. Or the rabbi who had been a pacifist and then changed his mind in the face of Hitler’s brutality; he called on every Jew to fight.

Jewish soldiers, such as Norman Mailer, Joseph Heller, J. D. Salinger, and Herman Wouk, would later turn their wartime experience into some of the greatest literature of the Twentieth Century.

One of the more emotional moments in the film is in 1944 when the Allies have just broken through the German border and hold a Jewish religious service in the town of Aachen. It is the first Jewish service in Germany and it is broadcast on radio around the world.

Another very powerful moment is when Nazis attempt to murder Jewish-American POWs; a fellow American POW, Roddie Edmonds, stands up to the commandant and saves them.
Toward the end of the film, when Jewish American soldiers participate in the liberation of the concentration camps, we feel how overcome they are to witness the inhumanity done to their brethren.

Those who survived and returned home to America were forever changed. Some more religious, some less, but all more dedicated to renewed life. They went on to support the community, fight anti-Semitism, help found Israel, or march for Civil Rights. World War II changed American Jews and American Jews helped win World War II.

I am proud of my family members who fought in that war against fascism and prejudice, and I vow that their service shall not be in vain.