A Contemporary Israeli Response to Terrorism 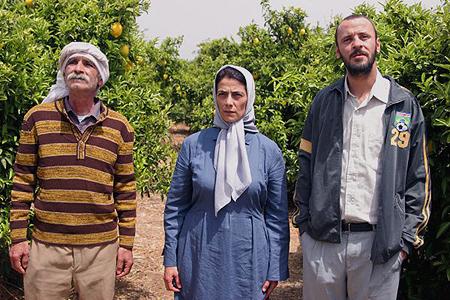 My last review, for Operation Thunderbolt, examined how an Israeli film responded to terrorism in the 1970s; but just as the state of international terrorism has changed in the decades that followed, so has the Israeli film industry. There have been a number of recent Israeli movies that have reexamined this issue; one of the best is “Lemon Tree” (“Etz Limon”) which was produced in 2008 and recently became available on DVD in the US.

Just as “Operation Thunderbolt” was based on a true event, so too was “Lemon Tree” inspired by an actual case. Yet the two films cannot be more different in their approach, style, and point of view, highlighting how radically Israeli society has changed in thirty years in its understanding of and approach to terrorism. The two films stand in stark contrast.

“Lemon Tree” tells the story of Salma Zidane (Hiam Abbass, “The Visitor”), a Palestinian widow who ekes out a meager living tending to her grove of lemon trees which just happens to be on the “green line” border between Israel and the West Bank.

Her world is turned upside down when the Defense Minister (Doron Tavory) and his wife Mira (Rona Lipaz-Michael) move next door. The Secret Service assigned to protect the couple determine that the lemon grove presents a security threat since terrorists could hide in it and attack the Minister’s home, and therefore it must be cut down.

The Israeli government actually offers to reimburse Salma for the trees, but no amount of money could compensate her for the agricultural inheritance left to her by her father. Besides, if she accepts Israeli money, she would be considered persona-non-grata among her own people. So she gets herself a lawyer, Ziad Daud (Ali Suliman), and challenges the demolition in court. Eventually the case is appealed all the way up to the Israeli Supreme Court.

As the case winds its way through the courts and the issues of terrorism, rights, land, and trees are debated, the lemon grove is fenced off and Salma is not allowed to tend her trees. When she climbs the fence and attempts to water her trees, she is threatened off at gunpoint. Meanwhile, the fruit rots. This recurring motif of rotting fruit is obviously symbolic.

Another potent motif is the security wall being built along the “green line,” which shows up in a number of scenes. I don’t know if the film’s producers intended to evoke Robert Frost’s famous poem, but speaking for myself alone, every time I saw an image of that wall I kept thinking of that line, “Something there is that doesn’t love a wall.”

And there were many shots of fences, too; but unlike the proclamation of Frost’s neighbor who “moves in darkness,” those fences which inhibit communication certainly weren’t making good neighbors.

The neighbor relationship in the film is very interesting. There is no direct contact between Salma and her Israeli neighbors. The Defense Minister insists they want to be good neighbors but he supports the decision of the secret service. His wife Mira, however, gains more and more sympathy for Salma. She is determined to talk to her and start a conversation. In one scene she “escapes” the secret service protection and climbs the fence hoping to meet her neighbor face-to-face. But just before they can make direct contact, the secret service agents pull her away, insisting the land she is on is not safe.

In a thematically similar scene, a soldier (Danny Leshman) tasked with guarding the grove approaches Salma when she attempts to water her trees. Just as they begin to start to talk on a basic level, the conversation is interrupted by the soldier’s superior. Somehow, one gets the sense that all of Israeli-Palestinian relations are met with similar frustration.

There are a number of particularly moving scenes, not all of which directly deal with the issue of terrorism. For example, the growing relationship between Salma and Ziad is touching. It’s particularly sweet when Zaid is running late to an appointment and Salma makes use of the time to clean and organize Zaid’s office.

Another very powerful moment in the film is when Salma’s foster father (Tarik Kopty), who helps tend the lemon grove, testifies in court about the sanctity of the trees. It indirectly reminds one of the role that the planting of trees has played in Israeli history and makes one wonder if things are now being reversed.

But just when it seems that Israel has been overreacting to a seemingly-inconsequential threat, an explosion at a party brings it all back to the serious side of terrorism. Issues of land-rights have a hard time competing against issues of life-and-death, making a happy resolution seem all the more evasive.

Though just as true-to-life as “Operation Thunderbolt,” “Lemon Tree” ends in a very different way. Whereas the former seems to imply that the answer to terrorism is simple and obvious—that you just hit them back—the more recent film offers no such easy conclusion. It seems that the more time has gone by, the more complex, difficult, and cloudy the issues become.

From my point of view, the point of view of the critic, I’m pleased to see how Israeli cinema has become deeper and more profound. As it’s grown and matured over the last several decades, it’s taken a closer look at Israeli society and has been able to reflect that.

If there is little hope for solving the issue of terrorism in Israel, I at least have much hope and admiration for an Israeli culture that struggles profoundly with the issue. If history has taught us anything, we know that great social and political strife yields great art.