Hassidic Widower Hopes to Regain Custody of His Son 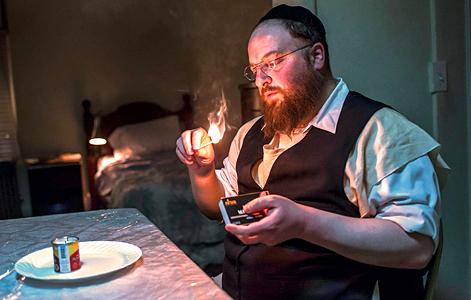 The tragedy that comes after tragedy is a lot less dramatic, but its melancholy can be beautifully poignant.

This is evident in the 2017 independent movie, “Menashe,” which was filmed in the Hassidic neighborhood of Boro Park, Brooklyn, and is almost entirely in Yiddish.

The story is set one year after the sudden and tragic death of Leah, who has left behind a husband and son, neither of whom have quite adjusted to life without her yet.

The title character, Menashe (Menashe Lustig, whose real-life story inspired the film), is a soft-spoken, loveable loser. He has a lifeless job at a neighborhood grocery store, his wife is gone, and his only consolation is his son Rieven (Ruben Niborski). But because of the rules of the ultra-Orthodox community in which he lives, his son cannot live in a home without a mother, so Rieven lives with his aunt and uncle, until Menashe remarries.

Despite the pressure of his Rabbi (Meyer Schwartz) and the community as a whole, Menashe has no interest in remarrying. In fact, he doesn’t seem very eager to conform to a number of the traditions of the community, such as in his refusal to wear the black hat and coat, or his insistence on cooking a kugel (normally something a woman would do) for Leah’s memorial meal.

His peers disdain him for this, as well as his inability to get his act together. He is especially despised by his former brother-in-law, Eizik (Yoel Weisshaus), who is anxious to take Rieven, his nephew, away from him. (I think, technically, they are still brothers-in-law even though the wife/sister is dead, but they don’t act like brothers, so I say “former.”)

The film focuses much more on the cruelty of this situation and the relationships between the characters, than it does on plot. What little plot there is concerns the week leading up to Leah’s one-year memorial ceremony and the memorial meal afterwards. The rabbi has allowed Rieven to spend this one week with Menashe, but a series of Meneshe’s faults prompt Eizik to take Rieven back.

Menashe’s faults really aren’t that horrible, but one night he gets drunk. One morning he can’t find any food to feed Eizik for breakfast except for cake and soda.  Another time, while at work, he forgets to close the back door to a delivery van which spills and ruins $1,000 worth of gefilte fish. Menashe finds it easier to create a mess than to clean one up.
Does this make him a bad father? Maybe. Should he not have custody of his son? That’s a question harder to answer, because Menashe does have some good qualities.

The film moves slowly, allowing the viewer to appreciate the nice moments along with the bad ones. It’s a joy to watch Menashe and Rieven playing together in a park by the light of the setting sun. Or a series of scenes in which father and son play with a pet baby chicken.  Or a calm scene in which Menashe bonds with his Hispanic co-workers and opens up to them about things he wouldn’t discuss with his fellow Jews.

The chemistry between the two main actors is beautiful. They are able to say so much with so little dialogue, such as when Rieven finds an old video of himself with his mother, or the scene where Menashe lights the Yizkor candle for Leah.

The one thing that seems a bit disconcerting is the film’s lack of female characters.  Although there are a few who pop up briefly, such as a widow he is set up with on a date that goes poorly, or the neighbor who gives Menashe a “bachelor-proof” recipe for kugel, the only real female character is Leah. And she’s dead.

Though she is constantly talked about, we only catch a brief glimpse of her in that video.  There aren’t even any women invited to Leah’s memorial service or memorial meal. (Actually, the women are probably relieved not to have to attend the meal, since Menashe has baked the worst kugel of all time.)

But the film’s biggest strength is to show us how tragedy goes on. Some people expect that a year after tragedy you should have your life back together, but it doesn’t work that way for everyone. There’s a deep sadness in the slow-burn, but it’s a loving sadness.
This film captures that well.